At Bhaktivedanta Manor, ISKCON’s flagship centre in the UK, Srila Prabhupada’s 125th anniversary theme was: Srila Prabhupada offers enlightenment to the world through his books.

For the occasion, the stage in the new Haveli was decorated with dozens of candles symbolizing the light of knowledge that Srila Prabhupada brought to the world through his spiritual teachings. Throughout the morning of Vyasa Puja, Srila Prabhupada’s disciples and grand disciples expressed their gratitude to him and appreciation of him.

Prior to Vyasa Puja – throughout the three-day Janmashtami celebrations on the Manor’s 78-acres that was attended by 33,000 guests and worshippers – Srila Prabhupada’s glories were continuously relayed by devotees speaking from the main stage. In addition, the Manor’s book distribution team, Go Matsya, has been dedicated to inspiring people to acquire Srimad-Bhagavatam sets with Srila Prabhupada’s translation and commentary. And the Manor’s harinama Sankirtan team has been spreading the holy name in London’s 400 tube stations. 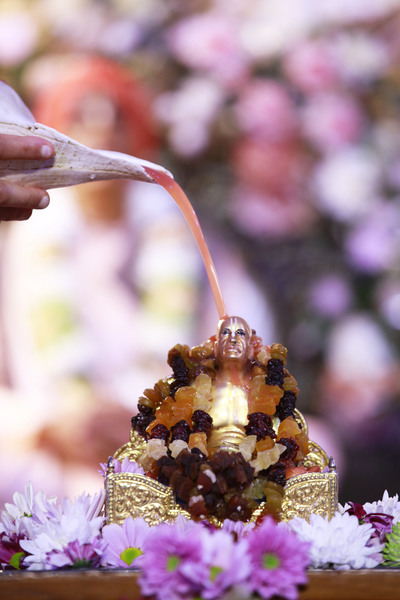 Plus, fifteen next generation devotees served with Visvadevi to make the flower arrangements in Srila Prabhupada’s room, as well as to decorate his Vyasasana in the temple room.

Engaging the next generation in Srila Prabhupada’s service during his appearance day was established by Sarva Mangala Dasi (a disciple of Srila Prabhupada) many years ago when she looked after Srila Prabhupada’s rooms, and now the children of that generation are coming forward to also help.
In this way, the spirit of this vital festival continues, much to everyone’s pleasure, excitement and ecstasy.