In May 2011, Captain Pratima Dharm was appointed as the US Military’s first Hindu Chaplain. The move was groundbreaking for the 1,000 or so Hindus serving in the US military, as well as their families, who until then had lacked a military confidant who understood their religion and culture.

In a broader sense, it’s also significant for the one billion people around the world under the broad banner of ‘Hinduism,’ or as Chaplain Dharm prefers to put it, ‘Sanatan Dharma,’ including ISKCON devotees.

Yet it’s not only Hindus who benefit from Chaplain Dharm’s appointment. While she can offer sacraments only to Hindu service members, she takes care of and provides facilities for people of all faiths at the Walter Reed National Military Medical Center in Washington D.C., where she is based.

When Chaplain Dharm speaks, it is with a combination of military professionalism and gentle humanity that makes you feel at once secure and cared for.

“I have sixty-five to seventy patients every day soliders, sailors, marines, airmen and women, and veterans who hail from every religion you can imagine,” she says. “There are Roman Catholics, Pentacostals, Baptists, Muslims, Buddhists, those who practice Paganism, and atheists too.”

For Dharm, who served as a chaplain in the US military for five years before becoming the first Hindu Chaplain, caring for all these service members is an opportunity to see God in every one of them.

“I must be able to relate to each one of them,” she says. “It helps that I have been exposed throughout my life to many different cultures and religions. But the journey goes on. Sometimes it means more learning on my part. I have to expand myself, and my own horizons. My approach is to understand first, and then to be understood. People have a need to tell their story, and I need to hear them and understand them rather than presuming anything. The key is listening just hearing people really well. And that’s a skill that requires a lot of practice.”

Many of Dharm’s patients are injured service members returning from Afghanistan and Iraq. They may struggle with readjusting to civilian life, health issues, depression and guilt. Dharm provides pastoral care and counseling to both these members and their families, as well as working with suicide prevention, an important issue in the military. She sees her job as helping service members to rise above the dark place they may be in.

“Some soldiers have lost their legs in combat, and once they’ve gone through surgery and healed enough, they’re able to sit in a wheelchair and be mobile that way,” she says. “Because their arms are the only limbs they can use, they get stronger and stronger, and soon they get carried away, speeding down the hospital corridors. Then I’ll jokingly halt them: ‘Hey! You need to stop that!’ The idea is to inject them with humor and hope and life it doesn’t matter if you’ve lost your limbs, you can still go on with your life, and it can still be good.”

For Chaplain Dharm, Lord Krishna’s personable nature makes Him the most attractive form of God. And being in the military, His message in the Gita of doing one’s duty is one she can apply practically in her life all the time.

“While the book is of course very sacred to me, since Krishna Himself spoke it, it’s not just scripture it is also very practical,” she says. “It helps me to stay grounded and to keep doing my duty in the wonderful way Krishna teaches, even when I’m in a situation I may not like. Our first instinct when anything gets difficult in life is often to run. But the Gita teaches us instead to look for what God is trying to tell us through a bad situation, and to think about what we can learn from it.”

Dharm has always been drawn to God, since her childhood in Patna, Bihar, in Northern India. She was brought up in a family of Rajputs, the warriors of India who hail from Rajasthan and who stand for protecting Dharma, or righteousness.

“I grew up in a tradition where bhakti, or devotion to God, was stressed a lot,” she says. “I loved every festival, every opportunity to worship God. Somehow, because of the way I was raised, Lord Krishna’s face became the face of God for me. I would even dream of Him.” 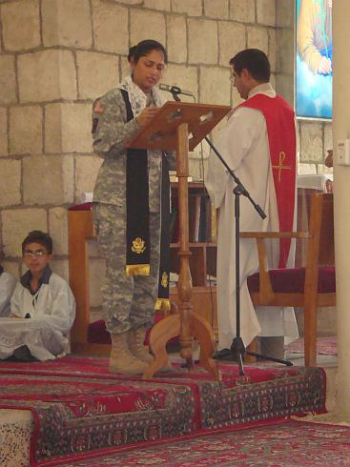 Chaplain Dharm preaches in a Roman Catholic Church in Zhako, Iraq to an audience of about 1,500 Kurdish men, women and children in 2008. Dharm was the first woman to preach at this church, where the service is still held in Aramaic, the language spoken by Jesus.

Dharm explains that especially amongst Rajput women, extreme levels of devotion to Krishna is not uncommon. Perhaps the most famous of devoted Rajput women, Mirabai, was someone Dharm looked up to a lot as a child.

“Her story is extremely appealing to me and my personality, since God is the most important for me too,” she says. “My relationship with God comes first, before any other. I never lose awareness that in every situation, God is first.”

As a youngster, Dharm often visited temples of Lord Krishna, and when at fourteen she moved to Mumbai with her family, she became a frequent visitor to the ISKCON temple on Mira Road, which she remembers fondly.

“I used to cook in the kitchen, help cut vegetables, serve food to the congregation, or just dance in the temple room,” she says. “There was so much opportunity to serve. I’ve heard that now, years later, it is a thriving center, with a huge Bhaktivedanta Hospital, and that they’re doing so many things to help the community. It’s very heartening to hear.”

Despite feeling a calling towards God, Dharm got her Masters Degree in psychology, not theology, when she went to University in India, because she never dreamed she could be so lucky as to combine her love of God with her career.

But when she got married and moved to the United States, everything came together.

“I came here the same year that 9/11 happened,” she says. “All my life, I had been drawn to the United States. I had always been a big believer in the personal freedom of the individual, and I liked the way America’s leaders and constitution expressed the idea. I truly believed that God had helped me come so far, where I could be in this country, and enjoy its freedom. That’s why the attack shook me to the core. It was a very emotional experience, and one that definitely influenced my decision to join the US Army and to serve this country.”

To become an army chaplain, Pratima Dharm went through extensive training, first getting her Masters in Theology from Ashland Theological Seminary in Ohio and Michigan, where she specialized in spiritual formation and church history. To gain experience and to understand different religions, she also worked in churches for several years, and studied Hebrew, Judaism and Islam.

“I find that every religion has its own strengths,” she says.

Chaplain Dharm feels that the years of training and education that have led her to her life’s mission, as well as the hard work being a chaplain entails, is more than worth it. And she encourages young men and women who are so inclined to follow the path she has trailblazed.

“If you feel called in this direction by God, it is a wonderful field to be in,” she says. 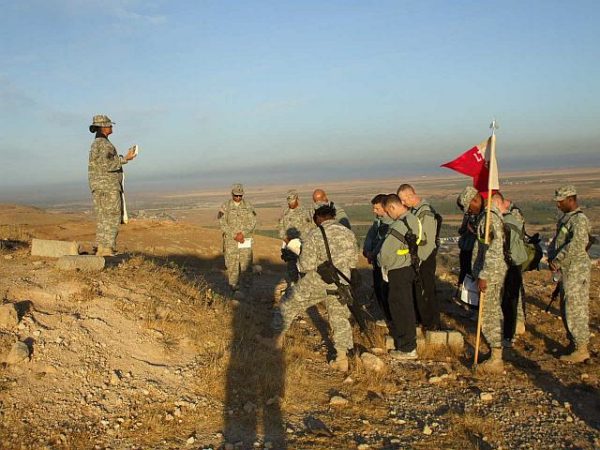 Lately, Chaplain Dharm has been gracious in offering ISKCON the chance to work with her and serve Hindu American soldiers.

In October 2011, she spoke with ISKCON Communications Director Anuttama Dasa at an event in the US Capitol sponsored by the Hindu American Foundation.

There, she ended her opening prayer by saying, ‘In conclusion, let us all chant that greatest of all prayers,’ and reciting the entire Hare Krishna maha-mantra in front of half a dozen congressmen and women, as well as prominent North American Hindu leaders and members of the military.

Prior to this occasion, in July 2011, Dharm met with Anuttama’s wife Rukmini Dasi at a White House event sponsored by the Hindu American Seva Charities and organized by the White House liason for the Hindu community Anju Bhargava. There, while being honored as the first Hindu chaplain of the US military, Dharm introduced some of the Indian American soldiers who had received the Purple Heart Award.

Later, she spoke with Rukmini, telling her that she had carried Srila Prabhupada’s edition of the Bhagavad-gita with her through three tours of Iraq. She then requested Rukmini to arrange that the Bhaktivedanta Book Trust ISKCON’s publishing wing print special compact Bhagavad-gitas for soldiers to carry conveniently.

“When they are going to war, it would become a symbol of security and protection for the Hindu soldier,” Chaplain Dharm says. “It’s a service to the military that I definitely encourage ISKCON members to get involved in.”

“The patients and staff were quite amazed by the spirit the three devotional performers brought,” she comments.

Today, Chaplain Dharm looks forward to many more years of serving God and her country in her new position, which she says is a privilege and an honor.

“Throughout my life, I’ve always sensed a personal call from God to keep moving in this direction,” she concludes. “And it’s that same call that I still hear, and feel grateful for, every day.”