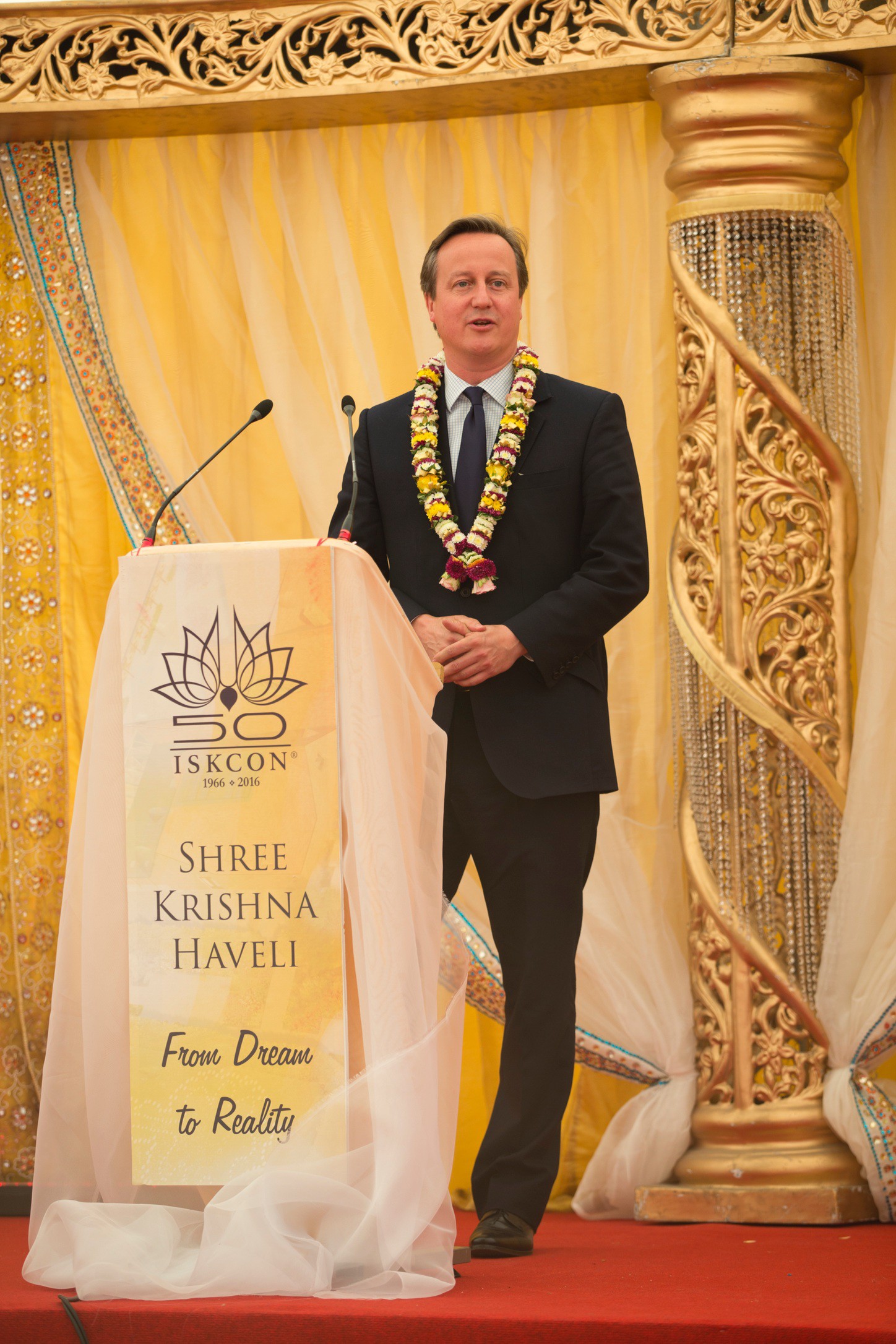 The Bhaktivedanta Manor marked the start of a new chapter in its history on Friday 10th June, as the groundbreaking ceremony for the long awaited Haveli building was led by UK Prime Minister David Cameron. The ceremony formed part of the Manor’s offerings to celebrate the 50th anniversary of ISKCON, upon which Mr Cameron heartily congratulated ISKCON on by praising Srila Prabhupada on his creation of a “global mission”.

A reception of over 300 people, including Parliamentary Secretary Under State Shailesh Vara, devotees and patrons, was held in a marquee over the spot where the new Shree Krishna Haveli will be built. HH Bhakti Charu Swami, HH Radhanath Swami, HH Sivarama Swami and HG Praghosa Das GBC were also in attendance.

After being shown the Temple Room and deities of Shree Shree Radha Gokulananda, the Prime Minister went on to garland the deity of Srila Prabhupada, stating “if only he had lived to see what the Manor has become; a mock Tudor country house donated by a Beatle, serving as a hub of worship, celebration and selflessness.”

The Prime Minister also congratulated ISKCON on its 50th anniversary, joking that he too will celebrate his 50th birthday this year. He went on to say: “I look at what you have done in the past fifty years and I think how much you can achieve in the next fifty. In fact, the next half century begins right now as we begin building the new Krishna Haveli, and I’m delighted to be putting the first tool in the ground.”

Shailesh Vara MP praised the Prime Minister for pioneering the term ‘British Indian’ and for forging better trade links with India. He said “the Prime Minister visited India more times than any other country, and took the largest trade delegation there… this Prime Minister cares about an inclusive modern Britain.”

Srutidharma Das, Temple President of Bhaktivedanta Manor thanked the Prime Minister for attending, and spoke of the important role of the Haveli and the need to “promote the spiritual values of tolerance, kindness… we at Bhaktivedanta Manor aim to embody these principles at large.”

Speaking about the Haveli, Managing Director of Bhaktivedanta Manor Gauri Das said: “This is a historic time for the Manor. The Haveli fulfils the needs of the Temple, respects the concerns of the local village and received full support from Hertsmere Council. It is a profound honour that the Prime Minister has put the first spade in the ground.”