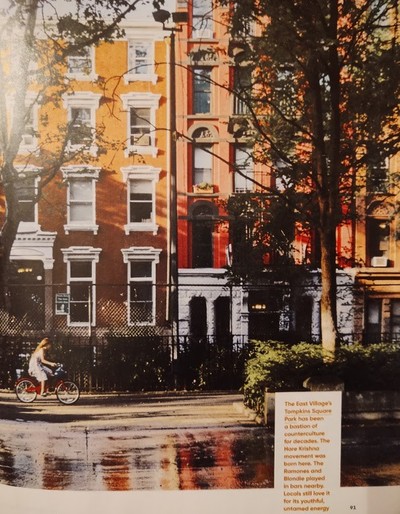 A leading monthly travel magazine with over 16 million readers displays a full page color photo of Tompkins Square Park with a caption that begins, “The East Village’s Tompkins Square Park has been a bastion of counterculture for decades. The Hare Krishna movement was born here.” Srila Prabhupada describes that birth, “Our sankirtana movement was first introduced in New York in 1966. At that time I came and began to chant this Hare Krishna mantra in Tompkins Square. I was chanting there for three hours with a small mrdanga (drum), and these American boys assembled and gradually joined, and so it is increasing.” (Science of Self-Realization) A plaque erected by the city in the park, after briefly describing the kirtana of October 9, 1966, mentions, “The event is recognized as the founding of the Hare Krishna religion in the United States.”
It is wonderful that this Hare Krishna birthplace was known to and popularized by Condé Nast Traveler, on page 91 of their April 2020 issue, which Hansarupa Dasa, ISKCON NYC president, showed us, when we mentioned that October 9 was the 54th anniversary of the first Tompkins Square Park harinama.

The evening of October 9, as I chanted at Tompkins Square Park, waiting for devotees to arrive to celebrate the anniversary, I saw two girls with dyed hair and colorful clothes reminding me of the hippies of 1960s. I asked them if they wanted to learn meditation, and they were into it. I taught them the mantra, and they sang three mantras responsively with me as I played the harmonium. They then accepted “On Chanting Hare Krishna” pamphlets, prasadam cookies, and invitations to our ISKCON NYC temple in Brooklyn. 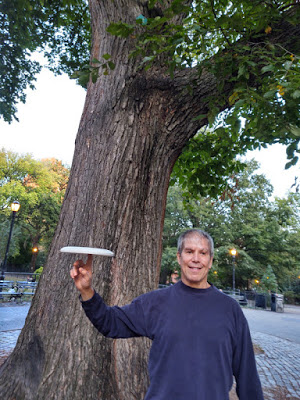 Brad, a local frisbee teacher, who recalls seeing many Hare Krishna functions in the park in the over 40 years he has lived nearby, posed by the Hare Krishna Tree, where Srila Prabhupada had his first kirtana, holding his frisbee like Lord Vishnu’s chakra. J.R. (left), who was playing guitar when I arrived and who regularly eats Adi Purusha Prabhu’s prasadam, which is served at Tompkins Square Park three days a week, accompanied our chanting in our final
kirtana after our reading of the Srila Prabhupada-lilamrita description of Srila Prabhupada’s first
kirtana in 1966. Jagadhatri Devi Dasi (left) recalled how Kadamba Kanana Swami told the devotees that the Hare Krishna Tree is a desire tree that can fulfill all your desires, and seeing two new people learning the mantra, a local musician joining the kirtana, and devotees happily commemorating the historic event, I felt my desires fulfilled. Jagadhatri even spoke about doing kirtana once a week there in Tompkins Square Park because it is such a sacred place.

Now in New York City, Rama Raya Dasa, back in New York City after a six month absence due to the COVID-19 restrictions and now based in Radha Govinda Mandir, does harinama sankirtana four hours a day with his NYC Harinam party at Washington Square Park, Union Square Park, or Columbus Circle, except on Saturday, when he does seven hours. Devotees from ISKCON New York chant in Fort Greene Park in Brooklyn on Thursday from 5 to 7 p.m., and devotees from The Bhakti Center chant at Washington Square Park on Sundays from 2 to 5 p.m. Thus here in New York City we strive to fulfill Srila Prabhupada’s desire for regular scheduled programs of harinama sankirtana, where the Hare Krishna movement in the west first began. By so doing we can cleanse our minds and those of others of the material conceptions which are the root cause of all of the present anomalies in human society and usher in a golden age of enlightenment as desired and foretold by Lord Caitanya five hundred years ago.

Here is a short video of our kirtana under the Hare Krishna Tree in Tompkins Square Park on October 9, 2020