Back in 2007, an inmate devotee [who wants to remain anonymous] slipped a Back to Godhead magazine underneath my cell door. That started my journey in Krishna consciousness. Saying ISKCON Prison Ministry (IPM) changed my life would be an understatement. IPM has transformed me, providing an understanding of life, Truth, and bliss I never thought possible.

If you ever thought you should show your gratitude to Srila Prabhupada for the bliss you’ve experienced in Kṛṣṇa consciousness, IPM seva is a profound way that he will recognize and approve from his place at the lotus Feet of Lord Krishna. Think about it. Your service to us, the most fallen of the fallen, the most conditioned of the conditioned, the outcastes of American society, can be like the mercy Lord Nitai gave to Jagai and Madhai —and it will grow and expand exponentially. If you have any doubts, please read on, and find out for yourself. 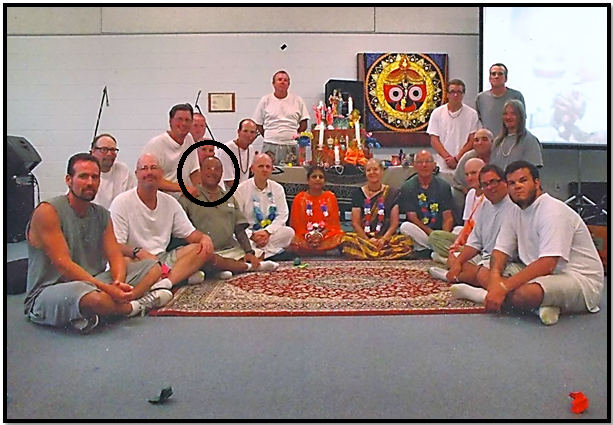 Starting out, a new volunteer in IPM should know a few basic things: communicating and teaching inmates about Krishna Consciousness can involve many challenges. Postal mail rules vary depending on the facility in which the inmate is housed. It also depends on the stage of the legal process in which the inmate is at. For example, when an inmate is first arrested, sending regular mail to a jail facility may result in the mail being returned for reasons that may not make sense. A jail is the first stop and the most restrictive in terms of what an inmate may receive. Be sure you check with the inmate before sending books or other worship items. Some jails allow 4” by 6” postcards only while others may not allow postcards at all. The restrictions vary greatly. Most people on the “outside” don’t realize there’s a big difference between jail and prison. If a minor crime is committed (a misdemeanor), people are sentenced quickly and usually do their time at the jail. Most often it’s less than a year. Serious crimes (felonies) involve longer pre-trial periods (even though actual trials are rare —usually a plea agreement is reached) depending on whether the State of the Feds are charging them. Pre-trial can last from months to years.

My pre-trial period lasted a very long four and a half years. Fortunately, there were no limits to the correspondence I could receive, which sustained me and allowed my bhakti to grow. A number of IPM volunteers buoyed my spirit during this dark period: Candrasekhara prabhu from Columbus, [anonymous] from Boise, and most notably, Bhakti-lata dasi from Alachua, Florida. She really lived up to her spiritual name and kept the bhakti-lata bija growing within me. Every single letter I wrote to her she replied in equal length and depth, sometimes as many as two a week! It was so amazing and meant so very much. She kept my hopes high, no matter what, always encouraging me to look to the future when I could start a Hare Krishna program at whichever institution I’d be doing my time.

This pre-trial period is tough. It pushes you to your limits, emotionally, mentally, and physically. It’s ugly and depressing to see how cruelly a fellow human can treat another —both inmates and guards. You see a lot of suffering and sickness and it’s so sad to watch a guard getting off on making someone miserable. It’s disgusting. There’s no doubt in my mind that most individuals who work in a correctional environment are of a demoniac nature —so it is SO important for IPM volunteers to safeguard their inmate pen pals, fortifying them with Prabhupada’s books and lots of Krishna katha. These demons love exploiting an inmate’s doubts and insecurities; during this time an inmate often obsesses about questions like —How much time will I get? Where am I gonna do my time? Will I be safe? Do my friends and family still love me? So many questions while being in limbo, in a state of suspended animation and treated worse than dogs in a dog pound. No kidding. Land of the free? It was really hard hearing the national anthem knowing how this government treats its citizens and the hypocrisy of those words. I’d have to plug my ears and chant.

In early pre-trial, during my first year in ’06, as a Mormon, I was down on my knees every day and night, reading only scripture. When I found out I was getting a 25-year sentence, I was devastated, as if God had held up his middle finger at me. All my fellow church members turned their backs on me. So a few months later, when a devotee gave me that BTG and taught me how to chant, I was willing to try anything to be relieved of such an abject misery metastasizing inside me like a disease from rotting meat that was swallowed, but fighting digestion. THEN, this devotee also GAVE me his only copy of the Bhagavad-Gita As It Is. I considered and appreciated this as an awesome gesture of goodwill that seemed to reflect those devotees I was reading about in the pages of the BTG. His kind and selfless act stood out. If this was indicative of how an INMATE devotee acted, what must they be like in the free world?! A big difference compared to the hypocrisy I discovered in those church members who professed to love me just a year earlier.

Chanting felt good. I was beginning to change and then something happened: I got to chapter 2, text 56 of the Gita and, reading in the purport, I learned that a person in Krishna Consciousness “accepts all miseries as mercy of the Lord, thinking himself worthy of more trouble due to his past misdeeds; and he sees that all his miseries, by the grace of the Lord are minimized to the lowest” A powerful realization lifted me like a Saturn V rocket. I had found Krishna, which is an astounding blessing. When I dove deep, fearlessly, and in complete self-honesty, facing those ugly past misdeeds, it occurred quite plainly that if things in my life had been just a smidge different, down to the simple fact of where I laid my head at night, I could have wound up with a life sentence. Krishna gave me such extreme mercy when I could have been doomed to spend the rest of my life in prison. In the eyes of many, I probably would have deserved it, but Lord Krishna, Lord Caitanya, Srila  Prabhupada…they had other things in mind for me. Now THIS was liberation. THIS was a paradigm shift in my thinking.

And THIS is how volunteering for IPM can affect another Spirit Soul. By fostering an inmate’s growth in Krishna Consciousness, you can be a catalyst of Srila Prabhupada to change a life from subversive to sublime. Read on and see how Bhakti-lata accomplished this with me. She views her own seva so humbly when it really is beyond profound. Her work has moved mountains and changed so many hearts steeped in nescience, hearts that were black and rotting, to transformed beings filled with light and Godhead. I wish there were more steady volunteers to assist her. I just know that Srila Prabhupada is very pleased with her service.

Back to my story. Freshly sentenced and having arrived at my first federal institution near Salem, Oregon, Bhakti-lata sent me my very first Tulasi japa mala and DVDs of Srila Prabhupada. I remember sitting by myself in a chapel room, viewing Prabhupada for the first time. Hearing his voice, watching him teach those early devotees, brought chills up my spine. I was ready and fired up to start a Hare Krishna service. I approached one of the staff chaplains, a Judeo-Christian, and in his exact words he informed me, “You will NOT practice that weird (expletive) in my chapel!” I was prepared to fight with the ferocity of Lord Narasimha, but after a few months that chaplain remained true to his word and orchestrated my removal from that facility.

The next facility was a small institution in Tucson and there, Bhakti-lata sent me more books, a bead bag, and my first neck beads. After only five weeks though, I was on my way to yet another institution. Destination Petersburg, Virginia. Lord Caitanya took no time showing me this was the place He prepared for me. No sooner did I introduce myself to the Supervisory Chaplain that he threw his arms around me declaring to the chapel, “Here’s Petersburg’s first Hindu!!!” He gave me a job on the spot, working in the chapel, and gave me a budget to order whatever was needed to start a service. Tell me that wasn’t miraculous? With the help of Bhakti-lata we contacted a Hare Krishna vendor and two weeks later the service was equipped with two mrdangas, four sets of kartals, a harmonium, murtis, wall hangings, multiple copies of Bhagavad-Gita As it Is, incense, oils, and japa malas! I was allotted 2 ½ hours for a service and another two hours for a study group, each week in the chapel. Immediately, Krishna Consciousness at FCI Petersburg began to grow. I shaved my head and started growing a sikha and observed strict adherence to the four regulative principles. Every morning, rain or shine, sleet or snow, I went outside to the yard and chanted my 16 rounds. It felt in Vaikuntha, right there in Virginia.

So blessed was my sanga that Srila Prabhupada sent us his disciple of 40-years, Sarva-drk dasa. He blessed us with his association once a month for the following six years, before he moved to India. And finally, the most auspicious day of my life: Srila Prabhupada’s disappearance day, on November 15,  2012, with full agni-hotra, in the outside worship area behind the chapel, I was initiated into the Gaudiya Vaishnava sampradaya and given the name Krishna Kirtan dasa, because of my very loud and enthusiastic singing of kirtan. Many members of our sanga, when they were transferred, started their own Hare Krishna services at other institutions and now, to this day, hundreds and hundreds of inmates have been blessed with hearing the Holy Name. All because a few devotees and IPM volunteers gave me their mercy and helped us do what those in our Parampara wanted us to do.

I now have about six years left to my sentence and I promised Bhakti-lata that I will devote my time, effort, energy, enthusiasm, and knowledge of the penal system in the U.S. to advocate for inmate bhaktas and be an integral part of ISKCON Prison Ministry.

Also I have a dream —a goal really: I want to find a rural setting somewhere in the U.S. and, with charitable funding, design a shelter for inmate bhaktas just getting out of prison. Applying Srila Prabhupada’s axiom of “simple living – high thinking”, it could be a halfway house, a community reentry center, or even a prime destination for ex-felons to relocate. A place where the formerly incarcerated could be understood, where men and women could practice Krishna Consciousness in an environment where their spirituality would thrive and the general public would not have to be concerned because of ex-felons living near them. It would have a goshala, a farm, a temple, and run them like all the other Hare Krishna rural communities. It would encourage and mandate exemplary social behavior following the teachings of Srila Prabhupada, the Gita, the Bhagavatam, the Caitanya Caritamrta, and the Vedas. Its name would be “Jagai-Madhai Village” in honor of the former rascals and miscreants who were transformed into first-class bhaktas

Dandavats and Vaishnava pranam to all of you and of course…

NOTE from Bhakti-lata Dasi: if you want to read more about the prison ministry's activities and also view inmate artwork, please go to: https://iskconprisonministry.org/