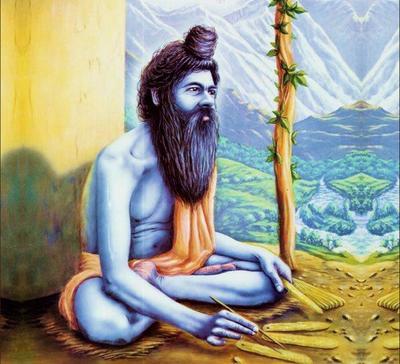 A multitalented person could do many things alone and even simultaneously. But have you ever heard of a book that does multitasking like this? Śrīmad-Bhāgavatam does. Because Śrīmad-Bhāgavatam is also a person, non-different from the
Supremely powerful Person Kṛṣṇa.

God descends to save the devotees, destroy the demons and reestablish dharma (BG 4.8). For these purposes, He appears as Matsya among the fish, as Varāha among the animals, as Haṁsa among the birds, as Rāma and Kṛṣṇa among humans, and as Vāmana
among the devatās. Similarly, He appears as Śrīmad-Bhāgavatam among the scriptures. The Bhāgavatam is another form of Kṛṣṇa.

This Book is a Teacher, a Friend and a Lover

The way Śrīmad Bhāgavatam teaches its readers is profound. This book has multiple meanings and perspectives that cater to multiple audiences. Śrīla Kṛṣṇadāsa Kavirāja Gosvāmī writes,

It is said that the Vedas generally teach in an instructive manner like a parent educates the child; the Purāṇas teach laterally, like a friend to another friend; and the Kāvyas (poetic works) teach their audience just like a lover speaks to a beloved,
but Śrīmad-Bhāgavatam does all the three.

By this beautiful Bhāgavatam, we are taught in times of ignorance, reasoned with in times of doubt, and nourished at all other times, as if by our most intimate companion. It is in this mood that Śrīla Sanātana Gosvāmī prays:

Śrīla Nārada Muni who inspired Śrīla Vyāsadeva to compile Śrīmad-Bhāgavatam, instructed him to write it in such a way that it mitigates the miseries of common masses and satisfies the hankerings of learned people (SB 1.5.40). Thus, the Bhāgavatam caters to the needs of multiple audiences ranging from hard core materialists to elevated spiritualists. Being Kṛṣṇa’s literary incarnation, the Bhāgavatam reciprocates with the moods and needs of its readers.

Amongst the Purāṇās, Śrīmad Bhāgavatam is considered spotless (amalaṁ) because it does not present anything material and is very dear to pure Vaiṣṇava devotees (vaiṣṇavānāṁ priyaṁ) (SB 12.13.18). Śrīla Viśvanātha Cakravarti
Thākūra, a great commentator on Śrīmad-Bhāgavatam, compares the Bhāgavatam with a lamp, the sun, a tasty fruit and Mohinī-mūrtī. These four comparisons are very significant in presenting different facets of the Bhāgavatam,
highlighting how this divine literature benefits the humanity.

A lamp dissipates darkness in a room. Similarly, the lamp (adhyātma-dīpam) of Śrīmad Bhāgavatam eradicates the darkness of ignorance in our hearts, by revealing the general descriptions of the Supreme Lord, such as His pastimes of creating
the material universe (sarga) and destroying the universe (nirodha). Sūta Gosvāmī compares the Bhāgavatam to a lamp in the following verses.

“Obeisances unto the son of Vyāsadeva, Śukadeva Gosvāmī, the guru of all sages, who, out of his compassion for the materialists who struggle to cross over the dark material existence, spoke the confidential essence of all Śrutis, Śrīmad Bhāgavatam, the
transcendental lamp that reveals ātmā, after having personally assimilated it by experience.” (SB 1.2.3)

“I meditate upon that pure and spotless Supreme Absolute Truth, who in the beginning personally revealed this incomparable lamp of knowledge (Bhāgavatam) to Brahmā. Brahmā then spoke it to Nārada, who narrated it to Kṛṣṇa-dvaipāyana Vyāsa, who
later revealed it to Śukadeva Gosvāmī, who mercifully spoke it to Mahārāja Parīkṣit.” (SB 12.13.19)

A lamp can eliminate the darkness within a room, but to fully dissipate the dense darkness of the night, the sun has to rise. With the sun rises even the thieves and rogues become fearful to steal. The Bhāgavatam, like a lamp, not only dissipates
the darkness of the hearts of individual souls, but like the effulgent sun, it destroys the demonic conceptions and atheistic mentalities in the entire world and brings joy to the devotees. Thus, the sun analogy reveals the capability of the Bhāgavatam in completely nullifying the effects of ignorance. The Bhāgavatam has twelve cantos, just as the sun has twelve forms for each of the months of the year. Śrīmad Bhāgavatam, like the sun among the planets, shines among the Purāṇas
(purāṇārka).

“This Bhāgavata Purāṇa is as brilliant as the sun, and it has arisen just after the departure of Lord Kṛṣṇa to His own abode, accompanied by religion, knowledge, etc. Persons who have lost their vision due to the dense darkness of ignorance in
the age of Kali shall get light from this Purāṇa.” (SB 1.3.43)

Śrīmad Bhāgavatam is also compared to a tasty fruit. Although all twelve cantos of the Bhāgavatam are like the lamp, the sun and a tasty fruit, the sweet topics of the Supreme Lord’s appearance and activities, and the topics of His devotees,
bhakti and prema, are especially considered to be the tasty fruit of rasa. All the topics, however, give joy to the devotees by taking on a meaning favorable for bhakti. The Bhāgavatam fulfills the desires of devotees who approach it with great eagerness to relish the pastimes of the Lord (āśraya).

The Bhāgavatam is described as a tasty ripened fruit in its third verse.

“O expert and thoughtful men, relish Śrīmad-Bhāgavatam, the mature fruit of the desire tree of Vedic literatures. It emanated from the lips of Śrī Śukadeva Gosvāmī. Therefore this fruit has become even more tasteful, although its nectarean juice was already
relishable for all, including liberated souls.” (SB 1.1.3)

“Galitam means that it falls down of its own accord when ripened on the tree, not by force. Even after falling from a high position in the tree, it does not break, nor does it lose its sweetness. That is because it comes down from the highest
position, from Nārāyaṇa, to the branch of Brahmā, then to the lower branch of Nārada, then to Vyāsa, and finally to the mouth of Śuka. Thus, without being damaged, it is endowed with liquid sweetness like honey. The parrot, Śuka, has even made an
opening in the fruit with his beak for bringing out the sweetness. Moreover, having been tasted by him, that fruit becomes even sweeter. Moreover, it remains unbroken, coming down step-by-step from the branch of Sūta and others. What is implied here
is that without the guru-paramparā, one cannot drink Bhāgavatam in its unbroken form – just by trying to taste it through use of one’s limited intelligence. How should the fruit be consumed? One should drink it, for this
fruit is the essence of taste (rasam), devoid of skin, seed and other objectionable parts.” (1.1.3 V)

The tasty fruit of the Bhāgavatam, however, is not accessible to everyone. Right consciousness is required to relish it. The Bhāgavatam, being a person, doesn’t reveal its heart or deeper meanings to someone who approaches it insincerely
and with non-devotional intentions. The same topics of the Bhāgavatam that give spiritual bliss to the devotees take on a different meaning to bewilder demonic people who are unfavorable to bhakti-yoga.

When the demigods and the demons churned the milk ocean, nectar appeared. But the demons snatched it away. The demons are envious, selfish and aesthetic in nature and are not qualified to drink nectar. The demigods who are devoted to the Lord are the
meant to drink the nectar. So, the Lord appeared in the form of Mohinī-mūrti, a beautiful woman and distributed all the nectar to the demigods and bewildered the demons with Her feminine attributes and didn’t give them even a drop. Similarly, the
Bhāgavatam reveals its inner meanings to sincere devotees and baffles those who approach it insincerely, for selfish purposes of making money and earning fame. Such people make a show of studying and speaking the Bhāgavatam and give
out deviant meanings to impress their audiences.

Lord Kṛṣṇa said in the Bhagavad-gītā that He would reciprocate with people according to the way they approach Him (ye yathā māṁ prapadyante tāṁs tathaiva bhajāmy aham, BG 4.11). Because the Bhāgavatam is nondifferent
from Kṛṣṇa, the Bhāgavatamalso reciprocates with the kind of person that approaches it, giving the true meaning only to the devotees who are sincere and engaged in devotional service of the Lord.

When Lord Kṛṣṇa entered the wrestling arena of Kaṁsa, He appeared differently to different groups of people. Kaṁsa’s wrestlers saw Kṛṣṇa as a lightning bolt, the men of Mathurā saw Him as the best of males, the women as Cupid personified, the gopas as their relative, the impious rulers as a punisher, His parents as their child, Kaṁsa as death personified, the unintelligent as a material form, the yogīs as the Absolute Truth and the Vṛṣṇis as their supreme worshipable Deity (mallānām aśanir nṛṇāṁ nara-varaḥ… SB
10.43.17). Just as Kṛṣṇa reveals Himself to different people according to their attitudes, the Bhāgavatam, which is non-different from Kṛṣṇa also reciprocates according to the reader’s attitude. Kṛṣṇa is full of Śaktis and so is
the Bhāgavatam. Thus, it takes meanings corresponding to the minds of various types of persons who read or hear it.

The purpose of a sincere devotee in approaching Bhāgavtam is to understand the name, fame, pastimes and qualities of the Supreme Lord; to derive inspiration from the lives of His great devotees; to develop Vaiṣṇava qualities of tolerance, humility, compassion
and so on that ender one to the Lord; to render selfless devotional service to the Supreme Lord; and to ultimately develop our innate love for Him.  So, if we approach the Bhāgavatam in this right mood as taught to us by the parampara or the lineage of spiritual teachers, we can attain the greatest benefit from this transcendental masterpiece.

Gauranga Darshan Das, a disciple of His Holiness Radhanath Swami, is dean of the Bhaktivedanta Vidyapitha at ISKCON GEV, a member of ISKCON Board of Examinations and GEV Administrative council. He has written books namely Gita Subodhini, Bhagavata Subodhini,
Caitanya Subodhini, Disapproved but not Disowned and Bhagavata Pravaha. He teaches sastric courses at several places in India.