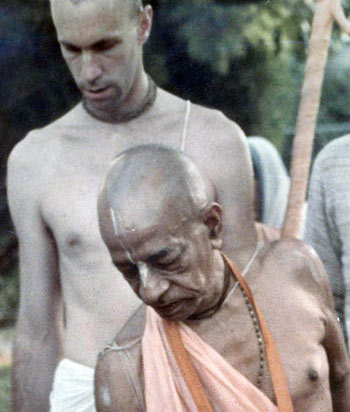 Based on the Teachings of His Divine Grace A.C. Bhaktivedanta Prabhupada

Twenty-first century Krsna consciousness is witness to a few new catch phrases. Among them are “inspiration” and “care for devotees,” Unfortunately, by themselves these terms are somewhat vague, so referring to Prabhupada may provide clarity. He used “inspiration” as follows: a motivation coming from paramatma or Sri Krsna,(1) an increasing attachment for Krsna impelled by His mercy,(2) an offering that gives pleasure to the guru,(3) and an artful attempt to urge others to serve and advance in Krsna consciousness.(4)

The final category, attempting to motivate others, includes “caring for devotees.”(5) Superficially, care for devotees implies physical and emotional welfare. However, Prabhupada instructed his brahmanas to provide specific Krsna conscious care.(6) He encouraged them to create structures to maintain the disciplines of Krsna consciousness,(7) set a good example,(8) and artfully urge others to comply with the rules of discipline.(9) Prabhupada emphasized that a brahmana should enforce discipline based on genuine affection toward dependents and junior devotees. He taught that discipline should be introduced not necessarily by rote or injunction, but by artfully blending structure, affection, and occasional chastisement or criticism.(10)

Instead of receiving gentle inspiration, some devotees pray that Krsna will simply force them to surrender, and indeed Krsna might mercifully grant that desire.(11) An advanced devotee finds external inspiration unnecessary since he or she becomes spontaneously attracted to discipline, austerity, and ardent sacrifice for the Lord. Thus, a humble devotee seeks to be inspired by Krsna’s mercy, which is the cause of the devotee’s advancement.

In conclusion, devotees generally rely on their own enthusiasm—sustained effort, not simply fervor–to motivate or inspire others. The brahmana or advanced devotee inspires and cares for others by setting an example, applying structure, and offering discipline based on affectionate relationships.(12)

1. SB 7.2.47 purport, “the intelligence gets inspiration from the Supersoul (dadami buddhi-yogam tam) [Bg 10.10]. In the synonyms to Cc Madhya 11.117 Prabhupada translates the word “prerana” as inspiration, yanre—in whomever; krpa—mercy; kari’—bestowing; karena—does; hrdaye—in the heart; prerana—inspiration; krsna-asraya—shelter of Lord Krsna; haya—there is. He translates the verse, “The man to whom the Lord shows His mercy by inspiring him within the heart takes shelter only of Lord Krsna…” In classical Sanskrit prerana means “motivation” or “instigation;” in Hindi, and Bengali it means “urge,” or “inspiration.”

2. Cc Antya 1.99, the word rati (attraction or love) indicates how the advanced devotee becomes inspired. Synonyms to this verse are tunde—in the mouth; tandavini—dancing; ratim—the inspiration; vitanute—expands. The translation is “When the holy name of Krsna is chanted, it appears to dance within the mouth.” The following verse, Cc Adi 1.100 elaborates. The synonyms: diya—giving; bhakti-rasa—devotional inspiration. Translation: “the Lord instills the mellows of transcendental loving service into the heart of a living being,” and by implication inspires the devotee. Another, more fundamental inspiration comes in the form of faith. Bg 7.57 synonyms: sah—he; taya—with that; sraddhaya—inspiration; yuktah—endowed; tasya—of that demigod. Translation: “Endowed with such a faith, he endeavors to worship a particular demigod…”

3. In a few letters Prabhupada wrote how he was pleased and inspired by his disciples. One letter to Gunagrahi, June 20, 1973, stated: “You are facilitating sankirtana and book distribution by traveling and going to colleges in a trailer, and you are preparing for a large Ratha-yatra festival. This is all pleasing and inspiring to me.”

4. In a letter to Anuttama, April 12, 1972, Prabhupada wrote, “I am very pleased to know that you are feeling happy in your execution of devotional service. Service of Krishna’s devotees is the highest stage of spiritual perfection, so your desire to render service to the other devotees is very nice. You keep this humble attitude always, and your example will be a source of spiritual inspiration for everyone.” In a letter to Trai dasa, temple president of the Boston temple, on Dec 27, 1972 Prabhupada wrote: “That is the business of leader: He must be himself always enthusiastic and inspire others to be always enthusiastic. Then he is real leader. And that enthusiastic mood is maintained when everyone is always without fail chanting 16 rounds daily, rising early for mangala aratrika, reading books, preaching—in this way, by observing strictly the regulative principles of devotional life, that enthusiasm or great eagerness to have Krishna will come out.”

5. Hayagriva writes in With Srila Prabhupada in Vrindavan, BTG, #53, 1973, “’In the lower stages one simply sees Krsna in the Deity and does not care for the devotees,’ he [Prabhupada] points out. ‘But the fact is that the devotees are always in the service of Krsna, and they should be taken care of. The person who worships the devotees is more important than the person who worships Krsna. An advanced devotee always gives respect to another devotee. Therefore we address one another as prabhu [master]. This should be realized, not just spoken. We should always be ready to offer respects to everyone because everyone is originally a devotee of Krsna.’” Satsvarupa dasa Gosvami writes in You Cannot Leave Boston, chapter 7, July, 1969, “Prabhupada depended on his disciples to help spread the Krsna consciousness movement. If we didn’t care for the devotees, Prabhupada said, the movement would fail. I heard him say once that if the devotees in ISKCON were not sincere, then people would come and remain unaffected. He depended on the devotees to be sincere and to train new people by always setting a good example. That was how he planned to nurture his movement’s growth.”

6. Letter to Balavanta, June 17, 1972, “we must establish qualified brahmanas at the head of the society, and widely distribute Krishna conscious principles.” Also, letter to Bhutatma, Aug 7, 1973, “The qualifications of a Brahmana are listed in the 18th Chapter verse 42 of the Bhagavad-gita. We want to create some men who can give guidance to the human society.”

7. Prabhupada wrote Govinda das, March 23, 1974, “Our whole Krsna Consciousness rests on following the regulative principles, chanting 16 rounds at least, daily and without fail, and avoiding the four sinful activities. Without following the regulative principles, so called devotional service is simply a disturbance. So be sure to always take care of the devotees in your charge in this respect.”

8. Prabhupada wrote in a letter to Amogha, Dec 13, 1973, “Take care of the devotees under your charge by maintaining our standards and always setting the proper example.” He wrote Satsvarupa, July 31, 1970, “I am therefore going to the Eastern hemisphere, beginning from Japan. We are going four in a party and all of us are Sannyasis. In this old age I am going with this party just to set an example to my disciples who have taken recently the Sannyas order.” He wrote Bhagavatananda, July 8, 1972, “If you do not set the example for the younger students and take the responsibility for instructing them in the right line, how will things go on?” He wrote Mukunda on Jan 12, 1974, “So you should set the example and also see that the others are following.” Again he wrote Satsvarupa on Nov 25, 1070, “You are right to say that the example and kindly guidance of our elder members in the Society is the most profound force for motivating our students both new and old towards advanced Krsna Consciousness.”

9. Cc Madhya 22.109, “A child is sent to school by force to receive an education, but when he gets a little taste of education at an advanced age, he automatically participates and becomes a learned scholar. One cannot force a person to become a scholar, but sometimes force is used in the beginning. A child is forced to go to school and read and write according to the instructions of his teachers. Such is the difference between vaidhi bhakti and spontaneous bhakti.” Also, Letter to Giriraja, May 15, 1972, “We [ISKCON brahmanas and administrators] have to deal with so many men with different personalities. So kindly utilize their energies and at the same time keep them satisfied. That is leadership. If one man is appointed as leader, all must follow him and be obedient. ‘Obedience is the first law of discipline.’ They are pointing out irregularities, but they themselves are not doing their duty, so they are pointing out the irregularities in others. They came to serve; now they don’t want to serve so there is some excuse: ‘Oh, irregularity, let me go away.’ The workers should not suggest irregularities. I am pleased you are selling many Krishna Books daily. All our men should go with books.”

10. From Everything Should Be Done on the Basis of Love, BTG, #10-11, 1975, an excerpt from a conversation with Prabhupada: “Everything should be done on the basis of love. Strictness is not very good. The students should act automatically, out of love. That is wanted. [However,] Superficially, strictness may be necessary—some material laws or basic principles—and if they don’t follow they’ll be reprimanded. But they should develop the idea of love. Sometimes you have to [force], but even so, the basic principle should be love. Sometimes, out of love, a father must force his son to do something; that does not mean the father is the enemy of the son. [If the teacher or preacher has not yet cultivated love:] In the meantime our regulated living will teach. Either with your son, your disciple, or your student, you should always strictly enforce the rules. Don’t be lenient. Out of love, shall we let our disciples and sons go to hell? That is foolishness.”

11. Prabhupada’s Nov 13, 1968 letter to Upendra, “Yes, you can pray to Krishna: ‘I am unwilling to become Krishna Conscious, so you can force me to become so. You put me under certain circumstances so that I may be forced to accept Krishna Consciousness.’ You can pray like that. It is Krishna’s special favor and mercy that He sometimes forces a devotee to surrender fully to Him.”

12. Lecture on SB 2.9.4, April 22, 1972, “A spiritual master has the right to chastise. [The] father [and] spiritual master are advised to chastise. Putram ca sisyam ca tadayen na tu lalayet. So father and teacher are advised by Canakya Pandita that ‘You should always chastise your son and disciple. Chastise.’ Tadayet. Tadayet means ‘Simply chastise. Always find out mistake.’ Don’t be angry, but it is the business of the teacher and the father simply to find out your mistakes, not to find out your good things.”