At the beginning of the process of creation, Lord Brahma created the ‘Four Kumaras’ or the ‘Chatursana’. As the Four Kumaras were born from the mind by just a desire (manas) of Brahma they are referred to as his Manasaputras. Their names are : Sanaka, Sanandana, Sanatana and Sanat Kumara. 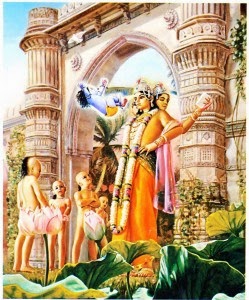 When the four Kumaras came into existence, they were all embodiments of pure qualities. They did not have any sign of negative qualities like proud, anger, attachment, lust, material desires (Kaam, Krodh, Lobh, Moh, Ahankaar etc). Now Lord Brahma had created these four Kumaras so that they could help in the process of creation. However, the Kumaras refused his order to procreate and instead devoted themselves to God and celibacy (brahmacarya). They requested their father for the boon of remaining perpetually five years old.

Due to the boon from their father Brahma and the strength of their tapa, the Four Kumaras looked like 5 year old. Jaya and Vijaya, the gate keepers of the Vaikuntha stopped the Kumaras at the gate, thinking them to be children. They told the Kumaras that Shri Vishnu is resting and that they cannot see them now. Sanat Kumars replied Lord love His devotees and are always available to for His devotees. You are no one to stop us from seeing our dear Lord. But Jay Vijay didn't understood their point and kept on arguing for long time. Though Sanat Kumars are very pure and have no trigunas of Maya in them (Sato, Rajo, Tamo) but by the plan of Lord to teach His gate keepers a lesson, He circulated anger in pure hearts of Sanat Kumars.  The enraged Kumaras cursed both the Dwara Palas, the gate keepers Jaya and Vijaya, that they would have to give up their divinity and born as mortals on Earth and live there. 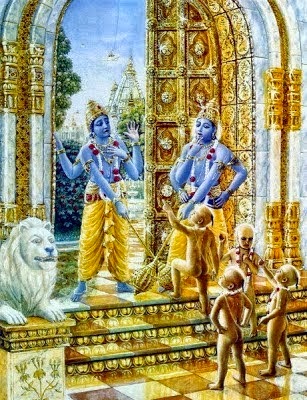 When Jaya and Vijaya were cursed by the Sanat Kumaras at the gateway of Vaikunthaloka, Shri Vishnu appeared before them and the gatekeepers requested Shri Vishnu to lift the curse of the Kumaras. Shri Vishnu says that curse of Kumaras cannot be reverted. Instead, He gives Jaya and Vijaya two options. The first option is to take seven births on Earth as a devotee of Vishnu, while the second is to take three births as His enemy. After serving either of these sentences, they can re-attain their stature at Vaikuntha and be with Him permanently. Jaya and Vijaya cannot bear the thought of staying away from Vishnu for seven lives, they agree to the second option to become enemies.

In the first birth as enemy to Shri Vishnu, Jaya and Vijaya were born as Hiraneyaksha and Hiraneyakashyipu in Satya Yuga. Hiranyaksha was an asura, the son of Diti and Kashyapa rishi. He was slain by the Lord Vishnu after he (Hiranyaksha) took the Earth to the bottom of what has been described as the "Cosmic Ocean". Lord Vishnu assumed the Avatar of a boar - Varaha and dove into the ocean to lift the Earth, in the process slaying Hiranyaksha who was obstructing Him. The battle lasted one thousand years. He had an elder brother named Hiranyakashipu, who after having undertaken penances which made him incredibly powerful and invincible unless several conditions were met, was later slain by Lord Narasimha, another incarnation of Shri Vishnu. 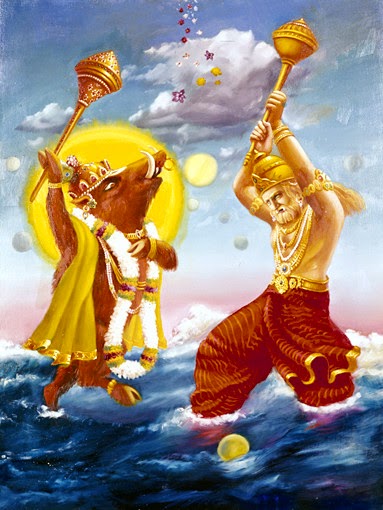 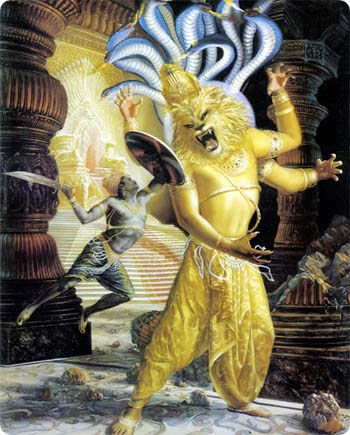 In the next Treta yuga - Jaya and Vijaya were born as Ravana and Kumbhakarna, and were killed by Lord Vishnu in His forms as Ramachandra and Lakshmana. 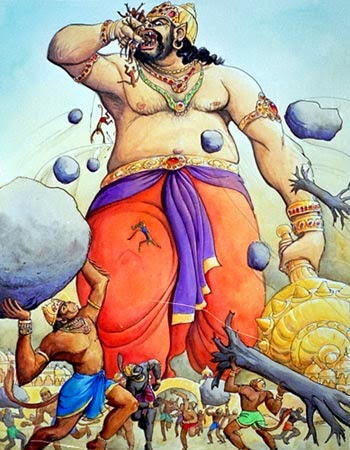 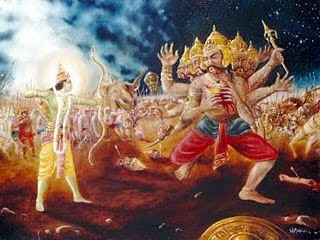 At the end of the Dwapara Yuga - Jaya and Vijaya were born their third birth as Shishupala and Dantavakra (an ally of Jarasandha, a friend of Shishupala and an enemy of Vasudeva Krishna) and Lord Krishna appreared Himself along with Balarama and killed them. Therefore, two attendants of the Lord in Vaikuntha named Jaya and Vijaya became Hirakyakasipu and Hiranyakka in Satya-yuga, Ravana and Kumbhakarna in the Treta-yuga, and as Shishupala and Dantavakra at the end of Dvapara-yuga. Because of their fruitive acts, Jaya and Vijaya agreed to become the Lord's enemies, and when killed in that mentality, they attained salvation in oneness. 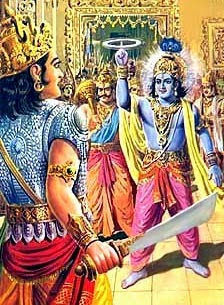 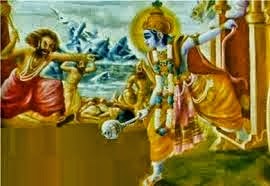 In this way Jaya and Vijaya attained liberation after three births.

For more such stories and Krishna Conscious reading, visit the below blog and follow on Google+: