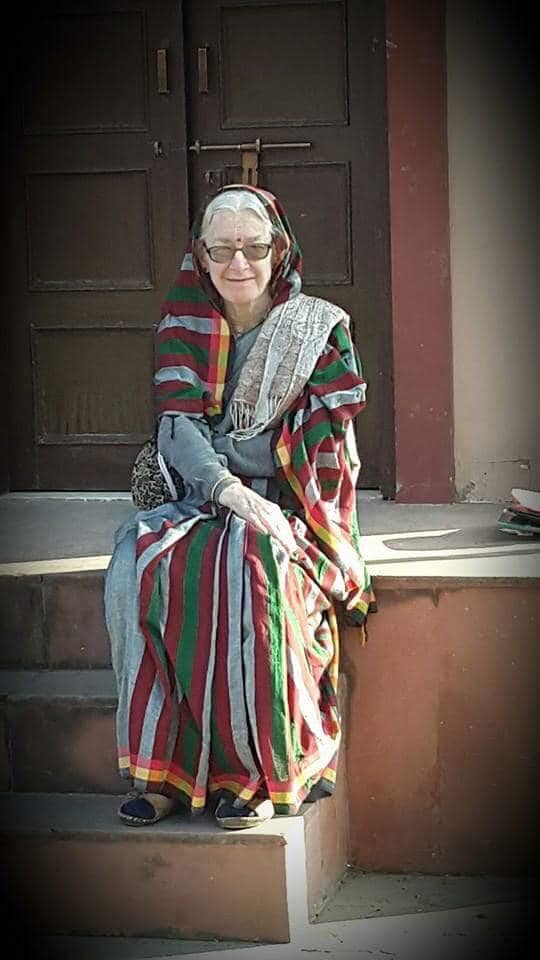 We lost one of the pillars of the Iskcon movement, one of the stalwart female pioneers in Srila Prabhupada’s mission- in the most glorious way! Her service to SP in the US, Kenya, Mumbai and Vrindavan is almost unparalleled. The stories and glories go on and on…

But the true test comes at the end.. And the whole affair at the end for her was SO beautiful and uplifting! Witnessing it gives me so much courage and confidence that this path is real! Experiencing such a glorious passing is a true and rare gift that I’m indebted to her for sharing with us.. Something I will cherish forever…

Our ultimate goal is be fearless at the time of death and achieve the Lords shelter with grace! And Mother Parvati showed us how to do this with her incredible exit strategy! Complete and undeviated devotion and dedication to her Guru’s feet and instructions- that’s the way she attained perfection and crossed over the material realm…

Even with advanced stage 4 pancreatic cancer and a fully bloated stomach (she kept joking, ‘look, I’m a 70 year old pregnant woman and look like you! – she had NO PAIN at all! The doctors were completely perplexed…
She was fully lucid the whole way through, even while going in and out of consciousness – chanting, listen to Srila Prabhupada’s voice and still giving her famous instructions left and right.

She left this world on Mohini ekadasi (the muhurta had already begun the night before) it was evident she waited and timed her passing. She was meant to leave so many times before, in the hospital etc but she waited till she got back to her home in vrindavan!

She went peacefully in the night without absolutely any fuss! Clearly she felt no fear. And there’s no mistaking that there was a very clear smile on her face when she left! (can only imagine who she was looking at!It was the most beautiful and peaceful face I have ever seen… Glowing! The positive spiritual energy was palpable in the whole house where she left!
The kirtans that followed were constant and deeply soulful. So many devotees showered her with love and flowers. Barely any tears anywhere. There was no need for tears! Everything seemed so perfect!

When they finally picked her up for her final journey, to take her to the samadhi and the burning ghat at the yamuna, the whole atmosphere changed instantly! Out of the blue, the sky became totally over cast (remember it’s hot here! Above 40 degrees) and cool winds started to blow! As if everyone and everything around started rejoicing… It was undeniable! Even my 2 year old boy started dancing and exclaiming, ‘mama it’s cool and windy!’
On her way to the samadhi, a baby calf came out of nowhere and peed on the path. I know it can sound strange, but this is vedically very auspicious and another calf came to her funeral pyre and circumabulated it, sniffed her and went away! Even the locals said they’ve never seen that. Usually it’s just dogs barking… Calves are never alone. And they don’t come to the burning ghat ever!
Twelve hours later and her body was still completely soft. No stiffness, no rigor mortis! Another sure sign…

Anyway…. I could go on. I’m just sitting here in awe!
She was such a power house… Some times too much for ppl to handle or understand.. but that power of her fierce devotion qualified her and prepared her for the final journey! Rough and tough on the outside but soft as a lotus petal on the inside, that’s her! Anyone with close interactions with her can attest to her deeply loving true inner self.

I sit here and pray to Mother Parvati to please guide us on how to love Srila Prabhupada! How to truly understand his desires and serve him with the sincerity she had.. And in doing so, make this life (and hopefully our final death) a success. She did it!! May we all aspire to follow in her footsteps!

Can’t end this post without giving a shout out to my soul sisters Kamala and Radhika , who have come together and just blown me away with their dedication to serving their parents and making the most of this whole experience… It’s so inspirational. I love you both so much! Thank you for allowing me to experience this with you.