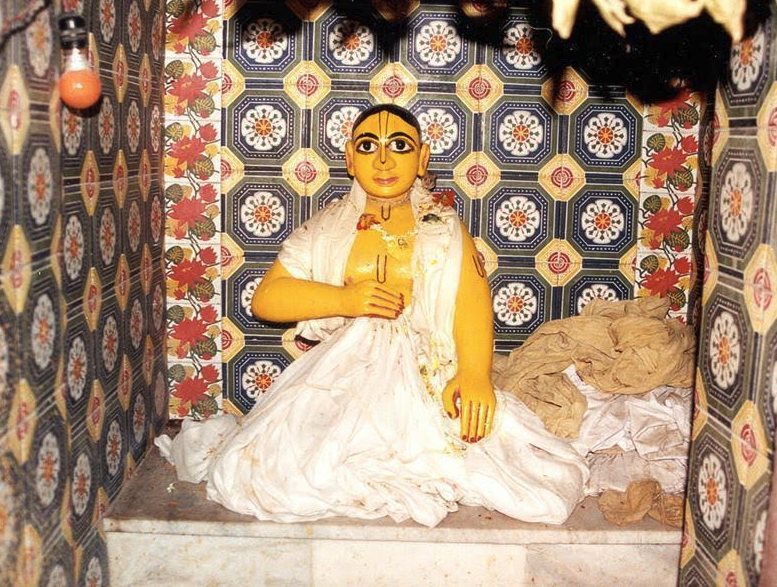 Dance and chant. This is best exercise. We allow them to dance very… Yes. High jump. Actually that is exercise, and at the same time ecstasy. If they dance and chant Hare Kṛṣṇa, it is automatically a very big exercise and spiritual advancement. (Śrīla Prabhupāda’s lecture given on Oct. 2, 1968 in Seattle)

The hall is packed with devotees. The kirtaniya, who was gesticulating up and down the harmonium, has just increased the pace of the kirtan. The Mrdanga & Kartal artists are not behind and they have melodiously increased their tempo too. The energy in the hall is all built up and devotees who were sitting all this while have stood up and are dancing with great gusto. This goes on for a while but in due course of time the dancing stops. How many times has this scenario occurred in your life? Or how many times have you observed this? But this stopping was impossible to be seen in the life of Vakreśvara Paṇḍita.

Born in the village named Guptipāra (near Triveṇi) he was one of the important singer and dancer in the assembly of Sri Caitanya Mahāprabhu. Once, when he was in Kuliā, he came there to do congregational chanting. When Devānanda Pandit, a great speaker on Bhāgavatam, heard about this he became really happy and proceeded there. Upon seeing the symptoms of divine love in him Devānanda became charmed. As crowd gathered, Devānanda took his stick and kept the crowd in order so that they don’t disturb his ecstatic dancing. He danced for 6 hours continuously and when he finished Devānanda came and offered his obeisances unto his lotus feet. He then said to Devānanda “May you attain devotion to Lord Kṛṣṇa”. Although Devānanda was great in giving lectures on Bhāgavatam, he didn’t receive the mercy of Mahāprabhu as he had offended Śrīvāsa Ṭhākura – a Vaiṣṇava. When Mahāprabhu visited Kuliā he bestowed his mercy on Devānanda as he had served Vakreśvara Paṇḍita. Mahāprabhu said “Wherever one can get the association of Vakreśvara, that place is the sum total of all Holy places and is as good as Sri Vaikuntha.”

Not only was Vakreśvara a very dear servant of Mahāprabhu but he also accompanied Him [Mahāprabhu] all the way to Jagannātha Purī after He took sannyāsa to better serve him more faithfully. Sometimes Mahāprabhu would engage Vakreśvara and other devotees in congregational chanting three times a day in the courtyard of Guṇḍicātemple and Vakreśvara would dance in jubilation.

From Caitanya-caritāmṛta, we can ascertain that he was expert especially in dancing as he once danced in the house of Srivas Thakur continuously for up to 72hours (~3days).

In Jagannātha Purī he lived in the house of Kāśī Miśra [King Prataparudra’s Guru]. As per as Śrīla Kavi Karṇapūra, the author of Gaura-gaṇoddeśa-dīpikā, Vakreśvara Paṇḍita was an incarnation of Aniruddha, one of the quadruple expansions of Viṣṇu (Vāsudeva, Saṅkarṣaṇa, Aniruddha and Pradyumna) and as per as Dhyānacandra Gosvāmī, in Kṛṣṇa lila, he was none other than Tungavidya Sakhi.