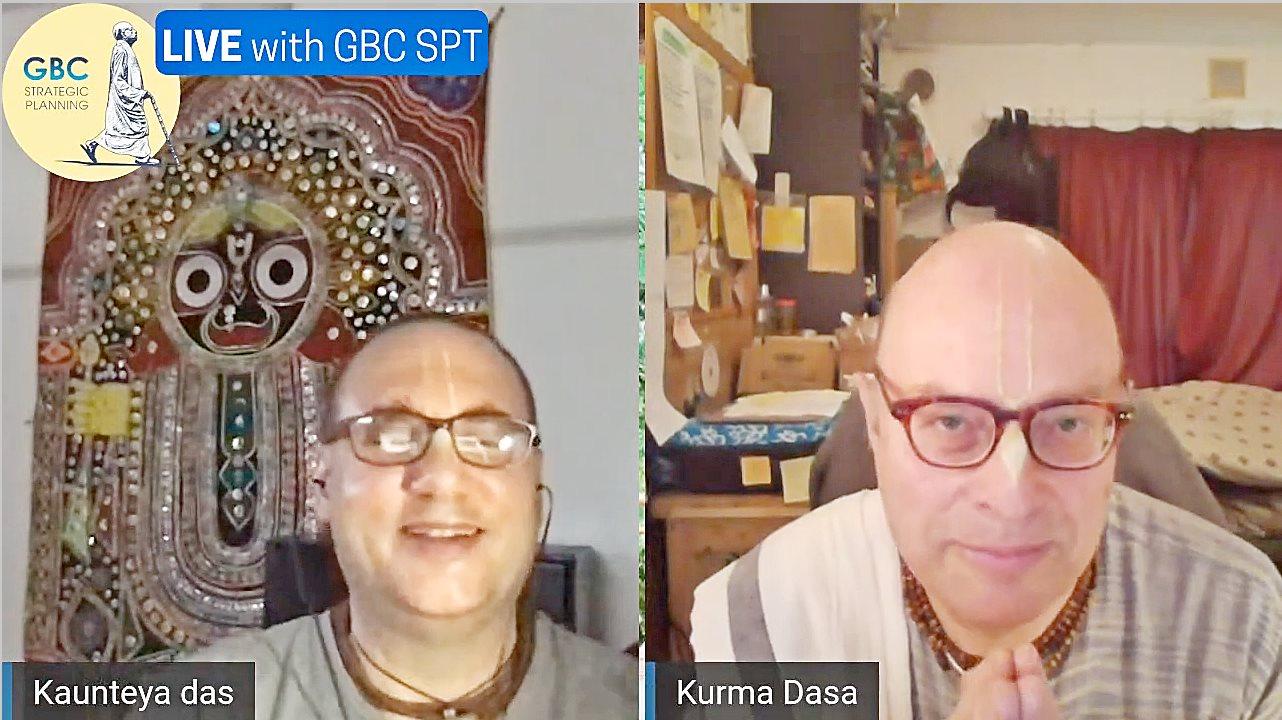 Let us meet and hear from one of the silent warriors of Srila Prabhupada’s army who marched fearlessly with him to spread Krishna consciousness in Every Town and Village.

About Kurma Das
Born in London, England in 1952, Kurma Dasa immigrated to Australia with his parents when he was 12 years old.
Kurma Dasa became an initiated disciple of His Divine Grace A.C Bhaktivedanta Swami Prabhupada on 10 May 1971 in Sydney.
He started his cooking career in the ISKCON Sydney kitchen by washing pots, cutting vegetables, grinding fresh herbs and spices, and assisting in the preparation of their famous Sunday Feasts.
Since those humble beginnings, Kurma has gone on to teach his special brand of elegant and eclectic gourmet vegetarian cuisine throughout the world.
Kurma was head chef at Melbourne’s most popular Vegetarian Restaurant, Gopal’s for many years, and is the author of Great Vegetarian Dishes (which is in its eighth print run), Cooking With Kurma, Quick Vegetarian Dishes, and most recently Vegetarian World Food. All books have received wide acclaim for their professional, clearly written and richly illustrated presentation of vegetarian cuisine.
Kurma has hosted three internationally broadcast television cooking series seen in over 46 countries.
For over 40 years, Kurma has personally shared his culinary arts in private homes, cookery schools, restaurants and colleges, temples, culinary institutes, in over 40 countries around the world.
As well as his four cookbooks in English, Kurma’s books have been translated into Hungarian, Italian, German and Farsi.
In 1993, after hosting a successful Prabhupada’s Disciples Reunions in Melbourne, Kurma was asked by the Australian devotees to write a book about Srila Prabhupada’s 6 visits to Australia.
After 5 years of intense interviewing, travels and research, his 800-page historical memoir The Great Transcendental Adventure- Pastimes of His Divine Grace A.C Bhaktivedanta Swami Prabhupada in Australia and New Zealand was published, to rave reviews.
Throughout his career, Kurma has cooked huge feasts all over the planet. After keeping careful record of many of his early feasts, he is currently working on a major
writing project: The Big Cook’s Cookbook, a feast-sized cookbook for bulk cooking.

As well as sharing his delicious cooking everywhere he goes, Kurma, a meticulous organiser, also conducts seminars on Menu Planning and Recipe Development, to enable other cooks to prepare delicious prasadam feasts themselves.
His seminars describe how to proceed through all the stages, from menu planning, manpower allocation, shopping, preparation of the place, storage of ingredients, through to the kitchen itself, to the penultimate cooking and finally the serving.
Kurma conducts other seminars such as “Anna Yoga” – the Yoga of Food.
Kurma loves to lead kirtans both on the street and in the temple, giving classes from The Great Transcendental Adventure, and especially relishes speaking on Srimad Bhagavatam. He currently resides in County Wicklow, Republic of Ireland, with his wife Dhira Lalita devi dasi.