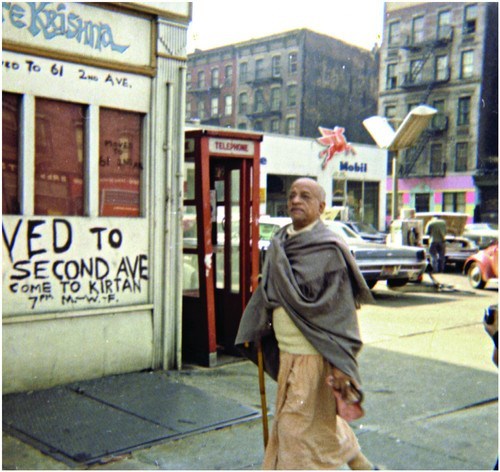 According to the lunar calendar, today is the most auspicious 54th anniversary of Srila Prabhupada’s departure for the United States of America.

On the 13th of August, 1965, just a few days before Janmastami and a few days before his sixty-ninth birthday, Srila Prabhupada boarded the cargo ship Jaladuta with only a small suitcase, an umbrella, a bag of dry cereal, some boxes of books, and a few rupees in his possession. He was about to embark on the mission that his spiritual master had given him many years ago.

Srila Prabhupada had been in Vrindavan for every Janmastami during recent years, and it was unthinkable for most residents of Vrindavan to leave Vrindavan for any occasion, what to speak of Janmastami. Most elderly residents of Vrindavan took vows never to leave, afraid that they might die while away from the holy dham. But here was Srila Prabhupada, an elderly sadhu, boarding a ship which would take him far away from Vrindavan, far away from India, to the land of the *mlecchas* – and he did not know when or if he would return.

“When he left Calcutta harbour for New York there was no one on the shore to bid him goodbye. He was alone. A lone fighter. No friends, no supporter, no disciple, nobody. Even if you call me, I was not a disciple of his. I was a disciple of somebody else. So I was not his follower. But due to shared love, I had very much respect for him. So, I was the only person standing on the shore to say him good-bye. No one was with me. I could not know that it was such an important thing.”

Although he may have appeared to be an elderly sadhu embarking on a hopeless mission, Srila Prabhupada was not alone – he was accompanied always by Lord Krishna. His departure for America was not happenstance, but had in fact been foretold by Sri Caitanya Mahaprabhu Himself:

“Taking the sharp sword of the congregational chanting of the Holy Name, I will root out and destroy the demoniac mentality in the hearts of the conditioned souls. If some sinful people escape and giving up religious principles go to far off countries, then My commander in chief (Senapati Bhakta) will appear to chase them and distribute Krishna consciousness.” — Caitanya Mangala, Sutra-khanda, song 12, texts 564-565.

Now, exactly fifty-two years after Srila Prabhupada departed on the Jaladuta, his ISKCON movement is thriving and ever-expanding, and the entire world owes him the greatest debt, for his compassion and mercy have saved us all.