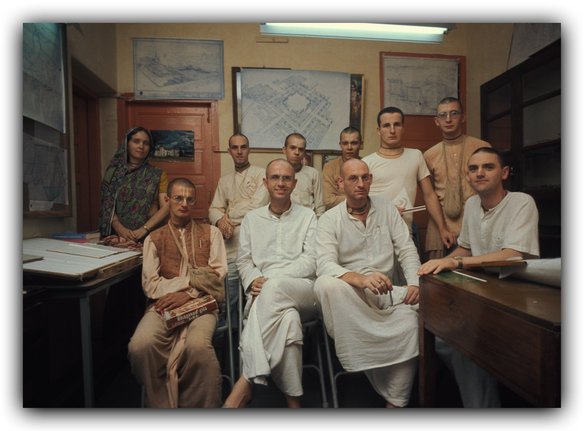 Early this morning Srila Prabhupada’s beloved disciple, my dear godbrother, Sankha Dasa departed this  world. You can read about him and his wonderful service to Srila Prabhupada in Juhu in the following excerpt from my book I’ll Build You a Temple: The Juhu Story. I have no doubt that Srila Prabhupada has called Sankha Dasa back to him. He is in the front row at the far left in the attached photo.

After Nara Narayan left, we didn’t have a steady gardener for almost two years—until Sankha dasa arrived after Gaura-punima in 1974. “I didn’t know how to do anything,” Sankha later admitted, “but I feel in my heart that I was blessed by Prabhupada to learn gardening. When I arrived, Caitya-guru, the temple commander, took me to see Prabhupada, and I said, ‘Srila Prabhupada, you have asked me to come to Bombay. What would you like me to do?’ ‘I want you to plant a flower in every square inch of Hare Krishna Land,’ he told me. And we offered our obeisances and left.

“The next day, we went back for clarification, and I asked Prabhupada, ‘Would you like me to grow vegetables?’ ‘No,’ he said, ‘our space is limited; it will be cheaper to buy them in the local market.’ ‘What about fruits?’ ‘Yes—guavas, chikus, bananas.’

Prabhupada passed by the garden every day on his morning walk, and some time after Sankha’s arrival, he noticed that there still weren’t any fruits or flowers growing. “Where are the flowers?” he asked Sankha, but there never were any. “He’s just bluffing,” Prabhupada commented. “He doesn’t know what he’s doing. Simply bluffing.”

Then one morning, after he had returned from traveling in India, Prabhupada went out for his walk and saw that the garden was full of fruits and flowers. He was very pleased with Sankha’s service, and thereafter, Sankha would offer Prabhupada a flower every day and became known as “Prabhupada’s flower boy.”

Sankha grew papayas, guavas, chikus, and strawberry bananas—small and pink inside, and very sweet. “One day at the airport when Prabhupada was about to depart for London,” he recalled, “I brought a big load of ripe bananas and asked Prabhupada if he would like one. He opened his eyes wide and said, ‘You grew these?’ ‘Yes,’ I replied, ‘I have grown them for you.’ He grabbed one, peeled it, and ate it all. ‘These are very good,’ he said. ‘Now pass them out to everyone in the airport.’ And while I was distributing the bananas, Harikesa jumped up on a table and started preaching. Prabhupada really appreciated when we grew our own food.”