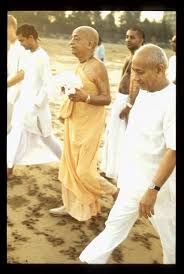 On a morning walk on Juhu Beach, Srila Prabhupada asked Dr. Patel why he was coming daily.

“I feel some sort of attachment to you. That is why I come. I don’t understand why I am attracted to you specially. I don’t understand. I have been thinking about it. I am very much thinking there must be some purva-janma, something from the past life. I don’t know. No sadhu has been able to attract me as much as you have. Not even temples have attracted me, to tell the truth.”

And Jasomatinandan Prabhu chimed in, “There is no sadhu except Prabhupada,” which exemplified his absolute dedication and devotion to Srila Prabhupada.