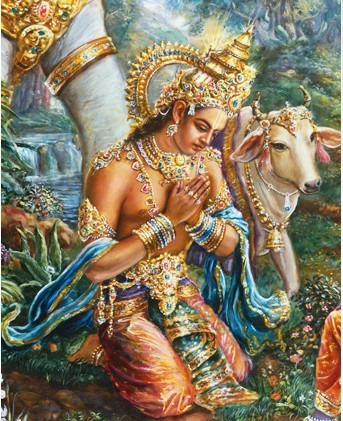 Forgiveness is Pleasing to Krsna

The duty of a brahmana is to culture the quality of forgiveness, which is illuminating like the sun. The Supreme Personality of Godhead, Hari, is pleased with those who are forgiving. (SB 9.15.40)

The Lord is very satisfied with His devotee when the devotee greets other people with tolerance, mercy, friendship and equality. (SB 4.11.13)

Forgiveness is virtue, forgiveness is sacrifice and forgiveness is the Vedas. Forgiveness is purity and penance; it is truth, piety, religion, and the holy Näräyana. Through forgiveness the universe is sustained, and by practicing forgiveness a man can attain to everlasting regions of bliss. (Yudhisthira Maharaja in Mahabharata quoting Kasyapa Rsi)

This is the sum of duty. Do not do unto others what would cause pain if done to you. (Mahabharata 5.1517)

Even if a devotee commits the most abominable actions, he is to be considered saintly because he is properly situated,”. As you will say, “To err is human”, so in the neophyte stage we may always expect some discrepancies are there. Kindly see the things in this light and forgive their small mistakes. The big thing is they have given their life, everything to Krishna–that is never a mistake. (Letter April 30, 1973)

I am glad to learn that your co-operation for this society is appreciated by the authorities, We should learn to forget and forgive minor incidents because whenever there are two men in a place, there is always some misunderstanding. (Letter, January 11, 1968)

So a devotee is always very understanding if there is some discrepancy behavior on the part of non-devotees, and even some devotees misbehave, he is always very tolerant and understanding. (Letter December 31, 1972)
Brahmanas are beautiful when they are forgiving, ksatriyas when they are heroic and never retreat from fighting, vaisyas when they enrich cultural activities and protect cows, and südras when they are faithful in the discharge of duties pleasing to their masters. Thus everyone becomes beautiful by his special qualities. And the special quality of the brahmanas, as described here, is forgiveness. (SB 9.15.40)
A sadhu, a devotee, is never angry. Actually the real feature of devotees who undergo tapasya, austerity, is forgiveness.

(SB 6.4.5)
Anger and resentment are due to ignorance due to material attachment. We have to solve the problem through knowledge and purification. (Srila Prabhupada)

The mind should be trained to think of the welfare of others (A.C. Bbhaktivedanta Swami)

Don’t become angry with the agent of your karma. (Srila Prabhupada) This may not be the exact quote but conveys the essence.
The brahmana said: These people are not the cause of my happiness and distress. Neither are the demigods, my own body, the planets, my past work, or time. Rather, it is the mind alone that causes happiness and distress and perpetuates the rotation of material life.

Failing to conquer this irrepressible enemy, the mind, whose urges are intolerable and who torments the heart, many people are completely bewildered and create useless quarrel with others. Thus they conclude that other people are either their friends, their enemies or parties indifferent to them. (SB 11.23.47)

If someone bites his tongue with his own teeth, at whom can he become angry in his suffering? SB 11.23.50)

Although a devotee has surrendered to the Lord’s devotional service, until he is completely perfect in Krsna consciousness he may maintain a slight inclination to enjoy the false happiness of this world. The Lord therefore creates a particular situation to eradicate this remaining enjoying spirit. This unhappiness suffered by a sincere devotee is not technically a karmic reaction; it is rather the Lord’s special mercy for inducing His devotee to completely let go of the material world and return home, back to Godhead.(SB 10.14.9)

Suniti said to Prahlada. My dear son, don’t wish for anything inauspicious for others. Anyone who inflicts pains upon others suffers himself from that pain. (SB 4.8.17)