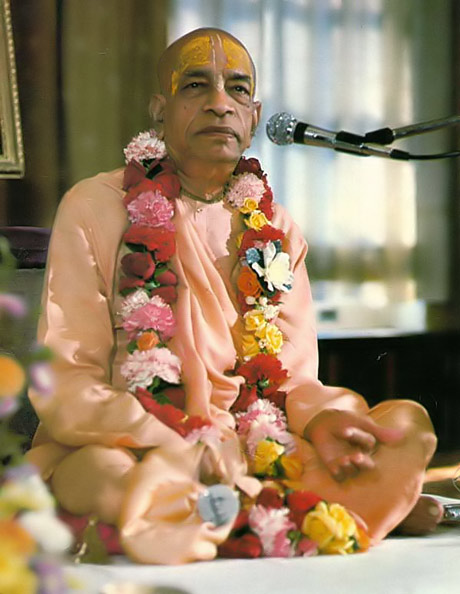 The early morning air was crisp as the Alitalia jet touched down on the airport tarmac. The sight of the plane sent the devotees crowded on the observation deck into a frenzy. They raced back to the International terminal and started chanting ecstatically to receive His Divine Grace. Since Prabhupada had chosen to visit only Melbourne this time, virtually every devotee in the entire Australasian zone had converged there. Madhudvisa, remembering the many bungled arrival receptions of the past, had been determined to make this one a success. He had hired a luxurious, chauffeur-driven maroon Rolls Royce to drive Prabhupada to the temple; it didn't seem like anything could go wrong. Devotees waved flags and banners, blew conches, danced and chanted unabashedly before the customs doors, jumping and straining to see Prabhupada as the doors opened and closed.

Customs authorities had agreed -- in consideration for his age and VIP status to allow Prabhupada to circumvent the usual protocol, which would normally have kept him queued up with the regular passengers. As a result, the devotees hoped that Prabhupada would move through customs quickly. Suddenly, a devotee from the back of the crowd yelled "Prabhupada!" Devotees turned and to their surprise saw Prabhupada standing humbly behind them. Customs authorities had indeed given Prabhupada special priority, and allowed him out through the VIP exit without informing anyone. The devotees had been at the wrong gate! Since Satsvarupa was detained, Prabhupada had walked the short distance alone. The airport was quiet for a moment as the devotees fell to the ground in obeisances. Then the kirtana resumed, louder and more blissful than before. Flower petals were thrown in the air, cameras flashed, and the reception party, now holding a blue-and-gold mirrored umbrella over Prabhupada's head, surged down the corridor to the press lounge.

Prabhupada, tanned from his two-months' stay in Bombay, looked graceful and aristocratic. A dark woollen shawl hung over one shoulder. In one hand he carried a bamboo cane and a large bouquet of yellow dahlias, and his white
travel bag in the other. Entering the lounge, Prabhupada sat, removing all but one of the many flower garlands around his neck. Despite the long, taxing journey, Srila Prabhupada, smiling brightly, appeared fresh and relaxed.

The kirtana roared. TV and newspaper reporters jostled and knelt beside Prabhupada, notebooks and pens poised. Film crews quickly adjusted their microphones and cameras. Prabhupada seemed unaffected by the fanfare, and, propping his cane next to his right knee, put his hand inside his bead bag and chanted.

Madhudvisa Swami, brightly dressed in orange silk, shaven head glistening with perspiration under the hot press lights, brought the kirtana to a close. The devotees settled in, cross-legged and attentive. Prabhupada's eyes slowly scanned the room, briefly scrutinising every face.

As the press conference began, it appeared that many of the journalists were somewhat hostile. A young reporter, perplexed by the devotees' reverence, wanted to know why the devotees had pressed their faces to the ground in obeisances at Prabhupada's arrival. Prabhupada answered soberly, unfazed by the reporter's aggressive mood: "The devotees prostrate themselves because the Kingdom of God is for the humble and meek. I am teaching them how to become humble and meek. I have to collect obeisances as a tax collector has to collect taxes."

Another reporter, displaying the attitude of irreverent interrogation typical of his kind, made an issue out of the devotees' fund-raising on the streets of Melbourne. "Have you any idea how much money the sect makes every year?" he asked.

Prabhupada grinned, "We can spend all the money of the world".

Prabhupada added with a twinkle in his eye, "Unfortunately, you do not give us the money." The devotees laughed and Prabhupada grinned even more.

"On this propaganda, all over the world. And we are selling our books, not less than $40,000 per month."

A female reporter asked Prabhupada if he liked to work. Prabhupada opened his eyes widely and looked her straight in the eyes. "We are working more than you twenty-four hours. In my old age I am travelling all over the world."

"But don't you get a lot of your money from begging?" asked another
reporter.

Prabhupada shook his head. "No, no first of all you see working  you cannot work more than us. Because I am an old man, 79 years old and I am travelling always, all over the world, twice, thrice in a year. You cannot work so much, at least."

Another reporter expressed his disapproval of the luxury car waiting for Prabhupada outside the airport terminal. "Your Grace, er, your religion is a very ascetic one. Will you be living ascetically in Melbourne? We're told that you'll be taken away in a Rolls Royce."

"Our religion does not say asceticism. Our religion teaches to love God." Prabhupada pointed to the reporter's stylish suit. "You can love God in your, this, dress. There is no harm." "But it is a self-denying religion, isn't it?"

Prabhupada shook his head slightly. "No, no. Not self-denying. We are using everything; why self-denying? We simply use whatever is absolutely necessary, that's all."

The reporter was not about to back down. "But wouldn't it be better that you were travelling in a much smaller car, less pretentious?"

But Prabhupada was not about to relent, either. "Why? If you give me a Rolls Royce to travel in, why shall I refuse it? It is my favour upon you that I accept this. The guru is the representative of the Supreme Lord. Krsna rides in a golden chariot. What is this Rolls Royce? Tin, rubber and wood. I say, 'Rolls Royce is not enough!'"

The devotees laughed at Srila Prabhupada's bold frankness; he had pulled no punches and certainly wasn't intimidated by the press. They had come looking for hot scandal, but he had given them cool-headed facts. He left them baffled by his transcendental style.