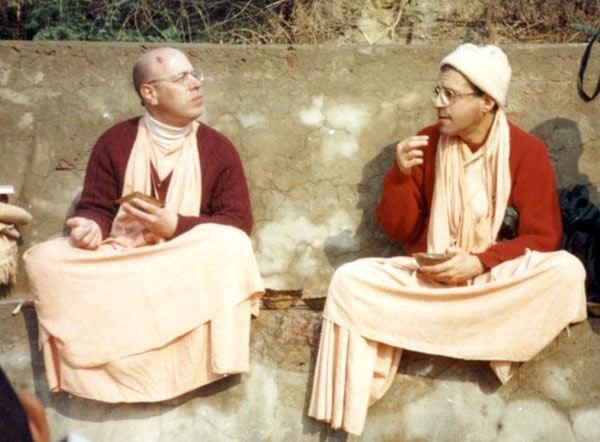 Let us hear about “Srila Prabhupada Personifies Devotee Care” from a very close and a dear disciple of Srila Prabhupada, HH Giriraj Swami. He is being interviewed by HG Gauranga Das.

Giriraj Swami was born Glenn Phillip Teton, the only son of a respected Chicago attorney and judge. In March 1969, while a student at Brandeis University, he met His Divine Grace A. C. Bhaktivedanta Swami Prabhupada, the Founder-Acharya of the International Society for Krishna Consciousness (ISKCON), from whom young Glenn said he learned more in one brief exchange than in his many years of academic education.

In 1972 Giriraj Das was appointed president of ISKCON Mumbai and a trustee of the Bhaktivedanta Book Trust. Since then, he has made many significant contributions to Srila Prabhupada’s mission, most notably overseeing the development of Hare Krishna Land in Juhu, Mumbai.

He was instrumental in the acquisition and development of the Bhaktivedanta Ashram in Govardhana and led the development of the Kirtan Ashram for women, the Bhaktivedanta Hospice, and the Vrindavan Institute of Palliative Care, all in Vrindavan. Through his efforts, Giriraj Swami has become renowned for his austerities, loyalty and dedication to Srila Prabhupada’s mission, his ability to raise funds and cultivate important members of society, and his care for devotees around the world.

In the year following Srila Prabhupada’s departure in 1977, Giriraj Das was awarded the renounced order of life and appointed president of ISKCON’s board of trustees in India. From 1982-2000 he served as a member of ISKCON’s Governing Body Commission. In that capacity he oversaw ISKCON’s activities in Mumbai, Mauritius, South Africa, Spain, Portugal, Sri Lanka, and Pakistan.

Giriraj Swami has also taught at the Vrindavan Institute for Higher Education and continues to lecture and to give presentations at japa retreats and workshops around the world.

Presently based in Southern California, Giriraj Swami now focuses on writing, one of the main personal instructions that he received from Srila Prabhupada. Giriraj Swami is the author of Watering the Seed and Many Moons and is working on several other publications, including books about death and dying in the Vedic tradition, his search for a spiritual master and his early days in the Boston temple, his travels with Srila Prabhupada in India and Srila Prabhupada’s monumental efforts in Mumbai, and Vaishnava holy days.