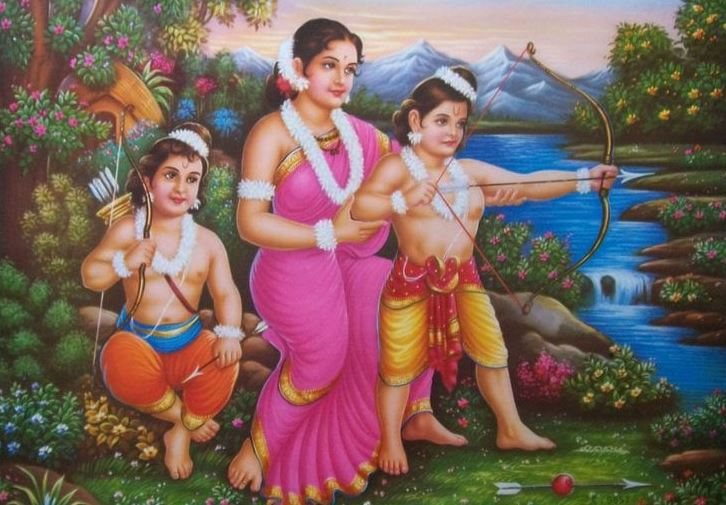 Throughout their lives these spiritually empowered mothers had gone through many trials, dangers, insults, accusations, neglect and even abandonment. Despite all the setbacks and difficulties, they remained steadfast in their duty and devotion to the Supreme Lord. In fact, they became the very pillars of devotion for their children and helped their children to walk on the path of righteousness and bhakti to the Supreme Lord. By meditating on their wonderful example and qualities and praying to them, we as mothers can receive much empowerment to raise our children in Krishna Consciousness even in midst of all the ups and downs of our lives.

In the Srimad Bhagavatam we find the glorious example of Queen Suniti who instructed her 5-year-old son Dhruva to seek shelter of the Supreme Lord after he was insulted and neglected by his stepmother Surici and his father King Uttanapada. Although feeling much aggrieved herself, Queen Suniti pacified Dhruva and guided him to worship the kind Lord. This is very nicely described by Srila Prabhupada in the following excerpt from the purport to SB 4.8.22. “In this connection, Queen Sunīti advised her son that the Supreme Personality of Godhead is known as bhṛtya-vatsala, which indicates that He is very kind to His devotees. She said, “You came to me crying, having been insulted by your stepmother, but I am unable to do any good for you. But Kṛṣṇa is so kind to His devotees that if you go to Him, then the combined kindness of millions of mothers like me will be surpassed by His affectionate and tender dealings”.

We see here how Queen Suniti tenderly acknowledges Dhruva’s emotions and hurt. She also admits her helplessness in the situation. Then she instructs her son to seek and worship the kind Lord saying that Lord’s kindness amounts to the kindness of millions of mothers like herself. This is very profound! As mothers we naturally desire to help our children, yet in some situations we may find ourselves completely helpless to do that. In those times we need not to loose hope. Instead, we can do what Queen Suniti did. Just like her, we too can listen to our children with empathy when they come to us sharing their concerns. We can try to help them as best as our capacity. Even when we find ourselves unable to solve their problems, we can admit our helplessness and guide our children to take shelter of the Lord. In this way we can give our children the best counsel and assistance. By first and foremost taking shelter of our kind Lord Krishna and thereafter doing what is required and practical for our individual situation, we can empower ourselves and our children. AS a result, we rise above the many insults and neglect by others.

Another glorious example of a spiritually empowered mother is found in the Mahabharata. Srimati Kunti devi, the mother of the illustrious Pandavas shows us how to depend on the Lord through the many calamities of life. She, along with her sons suffered many injustices and dangers from the power-hungry Duryodhana and the alike. Many attempts were made to kill Kunti devi and the Pandavas. Despite going through such attacks, both she and her sons remained devoted to the Supreme Lord. In every precarious situation faced by them, they always took shelter of the Supreme Lord and thus received his divine protection. The following beautiful prayer by Queen Kunti sums up her faith and love for the Lord where she invites the calamities to return. This is very astounding! She prayed in this way because for her these troubles meant sole dependence on the Lord. It meant his personal intervention and presence in her life and the lives of her sons. She prays, “My dear Krsna, Your Lordship has protected us from the poisoned cake, from a great fire, from cannibals, from the vicious assembly, from the sufferings during our exile in the forest, and from the battle where great generals fought…I wish that all those calamities would happen again and again so that we could see You again and again, for seeing You means that we will no longer see repeated births and deaths.” (SB 1.8.24-25)

By following this humble yet spiritually empowered example of Kunti devi, we too can gain courage and pray to the Lord for his protection and divine intervention to deal with life’s many challenges. It is interesting to note that Queen Kunti, although a widowed woman was able to raise her sons to become mighty warriors and devotees of Lord Krishna by application of her intelligence and devotion unto to the Supreme Personality of Godhead. We, as mothers can pray to her for such intelligence and devotion in raising our children and thus empowering ourselves and our children through the adversaries of life with the protection of the Supreme Lord.

In another epic scripture known as the Ramayana we find Sita devi, the devout wife of Lord Rama and the mother of Lava and Kusha. Sita devi’s many sublime qualities serve us with an exceptional example to follow. Although born and raised in royalty, she voluntarily accepted the austere life of living in the forest in order to serve her husband when he was exiled. Not only she accepted the hardships of the forest life, she also remained chaste and devoted to Lord Rama. This very quality of serving one’s husband with chastity is crucial for us to desire and develop. Whether we find ourselves in circumstances surrounded with luxury or poverty or anything in between, it is necessary for us to remain satisfied with what has been allotted to us and happily serve our husband and family as an offering of love unto Lord Krishna.

When Sita devi was kidnapped by the demon Ravana, she was able to protect herself from the incentives that were offered to her by him. She did this by remaining chaste and devoted to Lord Rama at all times. Ravana had offered her allurements of all kinds, such as riches and position as his foremost queen, yet Sita devi did not become distracted by such enticements. This virtuous example of Sita devi can help us in situations where we may find ourselves without any protection. By following her footsteps, we too can protect ourselves from the inducements offered by the illusory energy of the Lord as represented by Ravana here. We can also pray to Sita devi for such inner strength of chastity and devotion to our husband of this life and to our eternal husband, Krishna.

Another time Sita devi was abandoned in the forest due to the accusations made by a local washerman. Despite the criticisms and abandonment she remained immovable in her devotion to her Lord. Although deeply grieved she took shelter at the hermitage of sage Valmiki. The sage arranged for the ascetic ladies of his ashram to take care of Sita devi. It was here under their care she gave birth and raised her sons.

The following words were spoken by Sita devi to Laksmana after he had taken her to the forest as described in the Ramayana give us insight into her glorious character: Shaking with sorrow, she held onto a tree for support as She spoke to Lakṣmana. “O tiger among men, go then to Ayodhya and leave me here. After offering my respects to all my seniors, please say this to my lord: ‘O Raghava, you should always act in such a way as to ensure your unrivalled fame in this world. Surely my abandonment is necessary to save you from ill-repute. Thus, although torn by grief, I feel no anger. For a chaste woman the husband is the master, deity and preceptor.’”

Here we see the depth of Sita devi’s love for the Lord. As an expecting mother she was most vulnerable when left in the forest, yet she did not carry any resentment towards him for this. She also ensured that her sons too did not have any hard feelings for their father. Rather, she raised her sons with describing to them the glories of Lord Rama. This is very important for us mothers to deeply understand and apply. By having utmost respect for our spouse, we too can raise our children with such consciousness of respect towards their father as Sita devi had for Lord Rama. In this way we can become spiritually empowered and pleasing to the Lord. By praying to Mother Sita for the ability to develop respect and service mood towards our husband as she had for Lord Rama, we can empower ourselves and our children with many wonderful qualities necessary for Krishna consciousness .

Many times life puts us in situations where we have no shelter, protection, guidance, finances, support, etc. Sometimes we are insulted, cheated, disrespected and neglected. When going through such hard times, it can be very difficult for us to discern what is the right course of action. During those dark times, we can always pray to these spiritually empowered mothers such as Queen Suniti, Srimati Kunti devi and Mother Sita for inner strength, intelligence and guidance. By receiving their grace and strength, we can endure the unfavourable circumstances with a Krishna Conscious attitude and approach. This will help us immensely in gaining clarity and confidence to raise our children just as they did.

All glories to these Spiritually Empowered Mothers!!