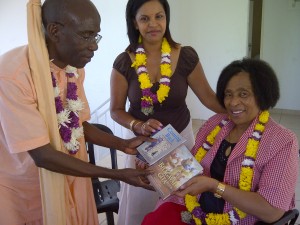 “I feel very honoured today, to meet, His Holiness Bhakti Vasudeva Swami from the International Society for Krishna Consciousness and receive a set of the most precious Books of Knowledge”, said Top Government Official, Mum Beatrice Ngcobo, Member of National Parliament the highest Legislative Body in the country.

The set consisted of The Bhagavad Gita, Coming Back, higher Taste and The Science of Self Realization, translated by His Divine Grace AC Bhaktivedanta Swami Prabhupada, Founder of the International Society for Krishna Consciousness.

She promised to start reading the Bhagavad Gita first. A paraplegic and also an academic, Mum Beatrice holds a masters degree in social science. She said Maharaj wet her appetite by saying that she was the right candidate to receive the Bhagavad Gita, which explains in detail the journey of the soul for spiritual development.

At a very fruitful meeting held over snacks, Maharaja and the New Jaganath Puri Management, the Government Appointment Representative Deployed to work in Phoenix, Mum Beatrice Ngcobo  together with Councilor Soroj Govender, trueservant of God, pledged their support to work closely to unite the people of Phoenix in all of ISKCON’s  Enrichment programme.

She was impressed to meet ISKCON’s young professionals introduced by Maharaja.  She also expressed her interest in working closely together.

Mum Beatrice Ngcobo said the plan is to unite all the people in phoenix and start vegetable gardens, the project called “one garden one home”. This would form part of the Government poverty elevation programme working together with ISKCON.

Maharaj said, our Vedic Culture is “Simple Living High Think” we need to live in harmony with nature. Not to exploit mother nature and utilize our minds and intelligence in serving the lotus feet of the Lord in devotional service. The secret to success. “The problem of the youth of today is they are color conscious”, said Mum Beatrice Ngcobo. Maharaj, responded by saying, “there is a huge identity crises, mankind needs to go deeper and understand the eternal living being, thereby shedding the ignorance. Hence the fights in the world including within the United Nation, in families are eradicated”.

HH Bhakti Vasudeva Swami said the objective criteria of human being is to know its mission, vision and goal, just like any government, company or institution has. The question we should ask ourselves why we are here and where do we go from here?

Maharaj quoted a verse from the Bhagavad Gita Chapter 3 Text 21:  “Whatever action a great man performs, common men follow. And whatever standards he sets by exemplary acts, all the world pursues”.

He said your conduct would speak louder than words.

He said change begins with you, these days universities  are keen to see what you can do to make a difference in society, then only are you accepted to study.

Charge your consciousness with spirituality by reading a verse of the Bhagavad-Gita daily. The problem of the world is that, people do not control themselves, hence crime is prevalent. She said greed is the first cardinal sin.

Lust anger & greed are the devouring enemies of the soul, they lead to the degradation of the soul and these are the three gates that lead to hell, according to Bhagavad Gita.

Mum Beatrice Ngcobo was positive that some aspects of the Bhagavad-Gita can be used in debates.

She said the knowledge she gained in the association of HH Bhakti Vasudev Swami for free was greatly appreciated because at University she would paid a lot of money that would make a few modules.