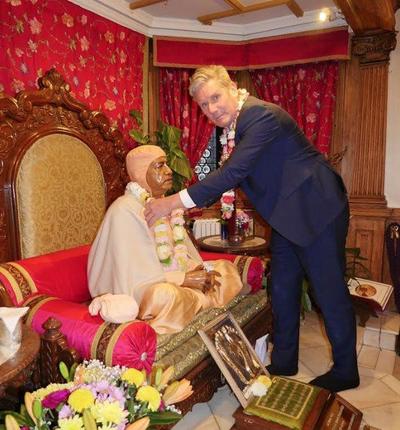 Sir Keir Starmer, Leader of the Labour Party, visited Bhaktivedanta Manor in Hertfordshire to mark the start of the Hindu holy month of Kartik.

On arrival, the Labour leader was greeted and garlanded as part of a traditional ceremony to welcome guests, and met with the Temple President, Her Grace Visakha Dasi.

Sir Keir spoke to Her Grace about being the first female President of a major Hindu Temple in the UK and recognised her endeavour in keeping the Temple open during the pandemic.

Sir Keir was then shown around the Temple where he had the opportunity to learn about its rich history – particularly how George Harrison of The Beatles’ love and enthusiasm for spiritual philosophy led him to donate the iconic mock-Tudor building and 78 acres of land almost fifty years ago.

“We were delighted to warmly welcome Sir Keir Starmer to Bhaktivedanta Manor and provide an insight into our extraordinary legacy and plans for the future.

“Next year we celebrate our 50th anniversary, and we warmly invite everyone to join us as we commemorate this wonderful milestone.”

Bhaktivedanta Manor Temple is one of the most popular places of worship in the UK, with a congregation of 10,000, and welcomes more than 250,000 visitors every year.

The Temple also hosts the biggest annual Janmashtami festival outside of India, which celebrates the birth of Lord Krishna. 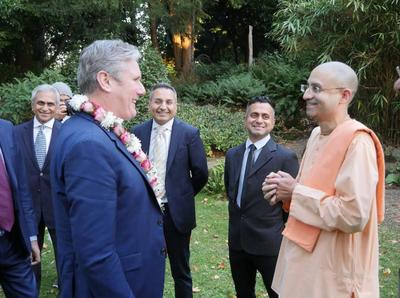