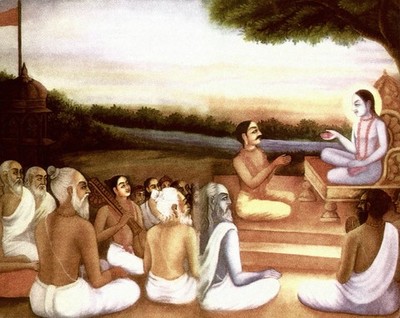 More devotees should know about the holy town of Shukratal. Shukratal is the place where Shukadeva Goswami spoke the sacred Srimad-Bhagavatam (Bhagavata Purana) to Maharaja Pariksit 5000 years ago. It is located about half way between Delhi and Haridwar, a four to five hour drive, and about 86 kilometers before you get to Haridwar. The little town sits on the banks of the holy Ganga River, where it has cut a swathe through the rocky region. Pilgrims come to visit this holy town, but it is still gaining recognition though it plays a serious role in our tradition of the Bhagavatam.

First of all, the village and the road to get to it are so small that they do not show up on most maps, so it is not easy to find unless you know how to get to it. But it is about an hour east of the city of Muzaffarnagar. There you can get a bus from the local bus stand that will take you there. One goes about every hour. Or hire a car to drive you. It rides over a bumpy and narrow road where traffic can come to a halt in the three small villages that you go through along the way. The first village along the road is Morna, which is a part of the legend of Pariksit that we will describe shortly. Then after some time there is a fork in the road and an arch over the way on the left that leads to Shukratal. A short drive later you enter the town itself. The bus will take you to the local bus stand or drop off point. But as you enter the town, the first place you reach is Shukteerth and the Bhagavata Peeth Shukdev Ashrama. If you stop here, you walk or drive up the hill to the ashrama’s parking area and see the 5100 year old Akshay Vriksha tree. This is the exact place where Sukadeva Goswami spoke the Srimad-Bhagavatam to Maharaja Pariksit. The ashrama is built around the tree.

WHAT YOU CAN SEE AT SHUKRATAL

What you will find at Shukratal is first the Bhagavata Peeth Shukdev Ashrama. This is built around the 5100 year old Akshay Vriksha tree which sits on top of the hill where 80,000 sages of all ranks gathered to here Shukadeva speak the Bhagavatam to Maharaja Pariksit 5000 years ago. It was under the branches of this tree where Shukadeva and King Pariksit sat. The tree is quite large, towering up to 150 feet, with branches spreading in all directions, even coming out of the sides of the hill just below the tree. One branch has a nub coming out of it that is in the shape similar to Lord Ganesh. The ashrama includes a number of shrines and deities within its complex, including one close to the tree that has the images of Shukadeva sitting and speaking to King Pariksit. Others include those for Hanuman, Shiva, Devi, Rama, along with a yajnashala, a Sanskrit Vidyalaya, a reading room, and a dispensary. The lecture hall, the Srimad Bhagavata Bhavan, is for holding continuous discourses and week-long kathas or recitations on the Bhagavata Purana. Many pilgrims come here from all over India to participate and can also stay the night in the ashrama. Across from the tree is also the Samadhi tomb of Swami Kalyandevji Maharaja, who established the Shukdev Ashrama and worked to bring back the significance of Shukratal. He also helped bring the sacred Akshay Vriksha tree back to good health. Therefore, much of the present day condition and recognition of Shukratal can be credited to him. He entered Mahasamadhi on July 14, 2004, having been born in Kotana village in Uttar Pradesh in 1876. The Bhagavata Peeth Shukdev Ashrama is now under the guidance of Swami Omanand Brahmachari.
From the top of the hill near the tree you can see over the town and the other temples that are here. Going down the hill along the street you can easily find the Hanuman temple, which has the world’s tallest image of Hanuman at 75 feet high standing outdoors over the main shrine, and built in 1687. This is presently managed by Swami Naistika Brahmachari Sri Keshwananda Ji Maharaja. To the right of this temple going down the street are shrines for Lord Rama, and another of Sri Sri Radha-Krishna, plus two more for Shiva and Durga.
If we go back to the street and around the corner in the direction we came from we will see the Ganesh temple which has a tall outdoor image of Ganesh, which stands
35 feet tall.
As we continue to explore the town, there are many more temples and ashramas of various sizes, mostly small but quite devotional. There is the Pracheen Ganga Mandir, a Ram Krishna Mandir, the Gayatri Teerth, and others. As we make our way through the central part of this small town and to the east we come to the Ganga, which is a quiet and peaceful river here compared to the swift and powerful river we find at Haridwar. Many pilgrims take a holy bath here.
As we make our way back, there are other temples we can visit, and you can see the tall outdoor images of the 101 feet tall Shiva in one place and Parvati in another that stands 51 feet tall. In another area is the Maheshwar ashrama, a goshala that takes care of several dozen cows which sells and distributes milk to a number of the temples. Many sannyasis wander the streets here and visit this place in the evening. Farther out of town there are small temples and ashramas where swamis may stay for the peace and quiet that is found here, which is especially nice for meditation and pondering the spiritual significance of this place and the importance of the Srimad-Bhagavatam. There is a long list of other ashramas and dharmshalas, along with a tourist rest house, that are located here. My visit to this sacred village was short, but I could see where a person could easily stay for days and experience the peaceful but spiritually powerful nature of this holy place. In many ways, Shukratal reminded me of Naimisaranya (near Sitapur), another small and quiet place where many temples have sprouted up around a few important central temples. Naimisaranya was where Suta Gosvami spoke the Bhagavatam to the thousands of sages who had gathered there to perform a large ritual for the upliftment of people in Kali-yuga. The Gaudiya Math has a nice, small temple there that was established by Srila Bhaktisiddhanta and which gives out free prasada at lunch time. But Shukratal is smaller and there seems to be no temple there that is in connection with the Gaudiya Math or Iskcon. This place is so important in our tradition that at some time we should establish a temple and ashrama there, especially to emphasize that the real yajna of today is Hari Nama sankirtana, which I’m sure the locals and pilgrims would greatly appreciate since that process is also enunciated in the Srimad-Bhagavatam. The closest Iskcon temple to Shukratal is the small temple in the village of Sisouli near Shamli, about 30 kilometers to the west of Muzaffarnagar. They can also help you facilitateyour visit to Shukratal.