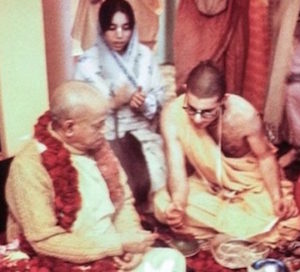 Fifty-one years ago, on December 26, 1969, in Boston, Srila Prabhupada awarded me second initiation. He said, “Sucih means purified. And another meaning of sucih is brahman. A brahman means purified. Those who are going to be sacred-threaded today should remember that they are being accepted as sucih, as brahman. After chanting for six months or one year, it is supposed that he has already become purified. Now he should be recognized that he is purified. So this sacred thread means recognition. Sacred thread means one should understand . . . Just like one understands a man is learned by the degrees M.A., B.A., or Ph.D., similarly, when there is sacred thread it is understood that he has undergone the purificatory process under superior management, or guidance of spiritual master. This is called upanayana in Sanskrit. Upanayana: bringing him more near. The first initiation is the beginning of purification, and offering the sacred thread means bringing him more near. The principle is that those who are ordinarily initiated should not touch the Deity. Only those who are in sacred thread, they should touch. This is the system.”