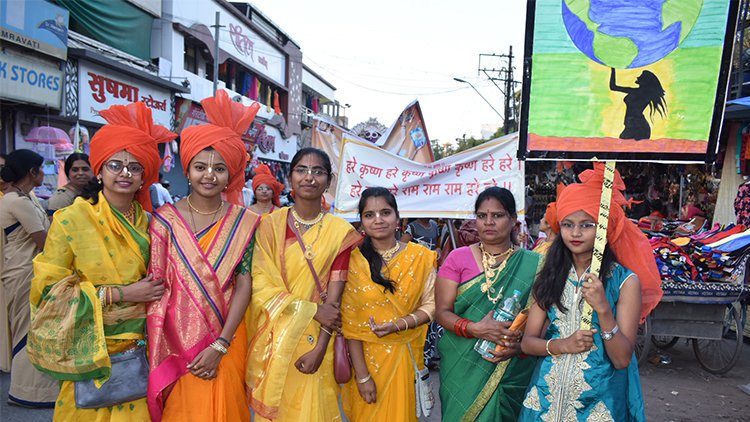 Last year, on International Women’s Day Amravati’s ISKCON Girls’ Forum held the inaugural Vaishnavi padayatra which proved to be a unique experience. Normally, in India, matajis remain restricted to cooking, garland making, or similar services. But coming together and organizing a padayatra was a great achievement. The matajis of ISKCON Amravati walked for 8km and participated in dramas, sankirtana and other activities along the way. Everyone was filled with enthusiasm. Later, as they discussed the event, they concluded that showing how women can come together and bring about such miracles warranted an annual Vaishnavi padayatra.

Amravati temple president Anantasesa dasa was very enthusiastic about the initiative, and said, “Yes, you go ahead and make it a grand event for all Amravatikars. Let people know what ISKCON is doing for society.” He also suggested inviting NGOs and various foundations for women’s welfare. This time the theme of padayatra was the protection and welfare of women, who are increasingly faced with outrages such as acid attacks and rape, thus demonstrating that matajis are united in protest against such heinous acts and are in prayer for world peace and for the souls departed as victims of violence.

Preparations for padayatra began at the end of January as the matajis held meetings with temple authorities and the congregation and banners and hoardings announcing the event were displayed across the city. Pamphlets were also given to each women’s group for distribution. They finalized the padayatra route from Sri Satidham temple to Sri Ambadevi temple. Thus, starting from one devi’s temple and ending at another devi’s temple and carrying Rukmini-devi on the chariot, all the devis walking and praying for all other devis. The making of a great women’s event!

With preparations under way, the organizingteam was filled with anticipation. Everyone came together working day and night to make posters on women’s welfare and the maha mantra that would be held aloft on padayatra.

On March 8, International Women’s Day, they assembled at the Sri Satidham temple at 3pm with all the matajis adorned in orange turbans to depict their unity. Sadhana Bhakti dasi was especially asked to perform sankirtan with her team in the Sri Satidham temple hall, and when she started her kirtan it made all the ladies dance. It was spectacular – ladies who had come for the first time danced to their hearts’ content. The ISKCON group had yellow saris as a dress code and other groups had other colours like red, blue and pink, so as the ladies danced it seemed that a rainbow of flowers was blending to be offered at the lotus feet of the Lord.

Then came a speech from the guest of honour, Mrs Navneet Rana, the member of Parliament for Amravati’s Lok Sabha constituency, whose words inspiring women to respect and help each other were hugely appreciated. It was followed by a ceremony in which Mrs Rana called upon little girls dressed as gopis to cut a cake. Next was the inauguration of the chariot on which Sri Sri Vitthala-Rukmini, brought from Kaundanyapur, were placed. The ribbon was cut and the secretaries of the various groups performed arati of Their Lordships. The chariot was beautifully decorated by Acaryacandra dasa, Bhakta Roshan and Bhakta Ayush and Their Lordships’ garlands were made by Dwarakavasini-devi dasi and Bhaktin Rupali. A beautiful white horse named Badal was yoked to the chariot, thus emphasizing the animal-friendly nature of devotees.