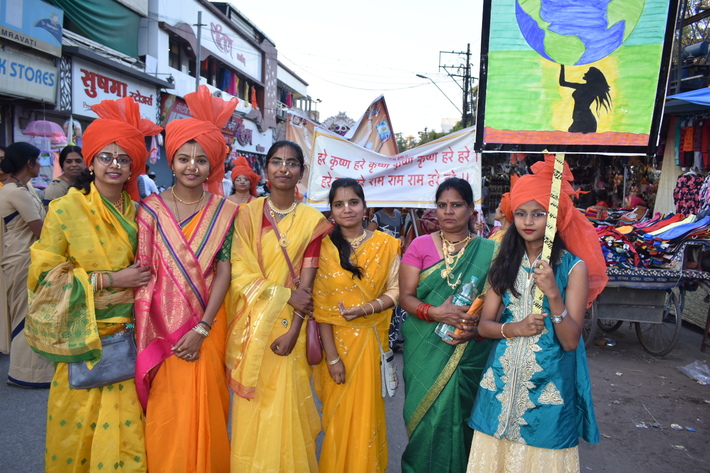 By the inspiration of our spiritual master, Lokanath Maharaja, on International Women’s Day last year Amravati’s ISKCON Girls’ Forum held the inaugural Vaishnavi padayatra. It proved to be a unique experience. Normally matajis remain restricted to cooking, garland making, or similar services, so coming together and organizing a padayatra was a great achievement. The matajis of ISKCON Amravati walked for 8km and participated in dramas, sankirtan and other activities along the way. Everyone was filled with enthusiasm. Later, as we discussed the event, we concluded that showing how Nari Shakti can come together and bring about such miracles warranted an annual Vaishnavi padayatra. As January 2020 approached our IGF took the idea to Amravati temple president Anantasesa dasa, who was very enthusiastic and said, “Yes, you go ahead and make it a grand event for all Amravatikars. Let people know what ISKCON is doing for society.” He also suggested inviting NGOs and various foundations for women’s welfare. We had Gita Jagruti programmes by Anantasesa throughout Amravati in December, so ISKCON had become the talk of the town and as a result we invited fifteen mahila mandals from the districts where those programmes had been presented. We all agreed that padayatra’s theme would be the protection and welfare of women, who are increasingly faced with outrages such as acid attacks and rape, thus demonstrating that matajis are united in protest against such heinous acts and are in prayer for world peace and for the souls departed as victims of violence. Preparations for padayatra began at the end of January as our IGF matajis held meetings with temple authorities and the congregation and banners and hoardings announcing the event were displayed across the city. Pamphlets were also given to each mahila mandal group for distribution. The padayatra route would be from the Sri Satidham temple to the Ekavira-devi temple. Anantasesa Dasa said, “You will start from one devi’s temple and end at another devi’s temple, and carrying Rukmini-devi on the chariot all the devis will walk and pray for all other devis.” The making of a great women’s event! With preparations under way, the IGF team was filled with anticipation. It is as our spiritual master always says, “Utasava priya manavaha,” and from utsava comes utsaha. Everyone came together working day and night to make posters on women’s welfare and the maha mantra that would be held aloft on padayatra. 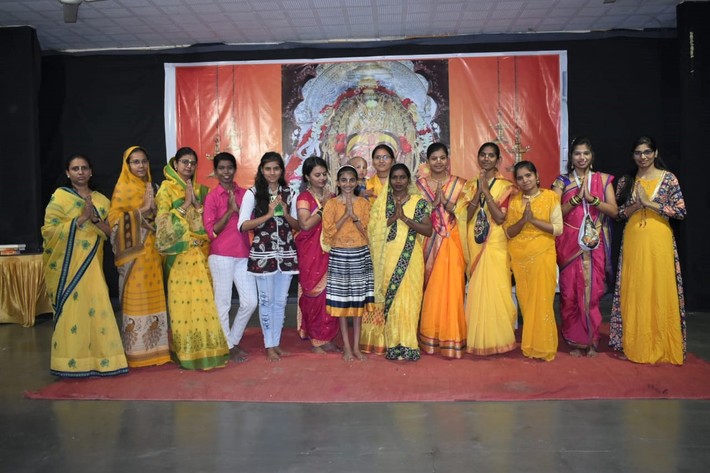 On March 8, International Women’s Day, we assembled at the Sri Satidham temple at 3pm with all our matajis adorned in orange turbans to depict our unity. We purposely held the event in the afternoon so that the ladies would have completed their housework and could participate. By the Lord’s arrangement it was also the eve of Gaura-purnima and we made sure to invite the assembly to join us for that celebration. Sadhana Bhakti mataji was especially asked to perform sankirtan with her team in the Sri Satidham temple hall, and when she started her kirtan it made all the ladies dance. It was spectacular – ladies who had come for the first time danced to their hearts’ content. Our ISKCON group had yellow saris as a dress code and other groups had other colours like red, blue and pink, so as the ladies danced it seemed that a rainbow of flowers was blending to be offered at the lotus feet of the Lord. Then came a speech from our guest of honour, Mrs Navneet Rana, the member of Parliament for Amravati’s Lok Sabha constituency, whose words inspiring women to respect and help each other were hugely appreciated. It was followed by a ceremony in which Mrs Rana called upon little girls dressed as gopis to cut a cake. Next was the inauguration of the chariot on which Sri Sri Vitthala-Rukmini, brought from Kaundanyapur, were placed. The ribbon was cut and the secretaries of the various groups performed arati of Their Lordships. The chariot was beautifully decorated by Acaryacandra dasa, Bhakta Roshan and Bhakta Ayush and Their Lordships’ garlands were made by Dwarakavasini-devi dasi and Bhaktin Rupali. A beautiful white horse named Badal was yoked to the chariot, thus emphasizing the animal-friendly nature of devotees.

Padayatra then began with Sadhana Bhakti leading kirtan. The parade passed through the heart of the city, the wonderful sight of the flags, posters and mantra banners held by the ladies generating public interest. The police were deployed to control the traffic and escort the padayatris, and Haripran dasa arranged that water and ice-cream were available to keep everyone invigorated. Matajis from Nagpur, Dhamangaon, Wardha and Nimkhedi participated in the walk, making about 300 matajis in total. The IGF girls distributed books along the way and as we walked by people came out and took darshan of Sri Sri Vitthala-Rukmini. At 7pm we reached the Sri Ambadevi temple kirtan hall where the padayatris were welcomed. We then watched two dramas by our IGF team on the importance of Bhagavad-gita and dangers of social media and the importance of IGF classes, and poems on women’s empowerment were read by Samiksha and Vanamali devi dasi. We ended by thanking all devotees and the various groups attending the event as well as the temple authorities for their blessings and support.

We could do all this only by the causeless mercy of Lokanath Maharaja. He is a constant source of inspiration for us and pleasing him is the aim of our lives.

Special thanks to Shaktyaveshavatar dasa, Meghashyam dasa and Bhakta Sagar who have been with us since the inception of the women’s padayatra. Without them this walk would have been incomplete.