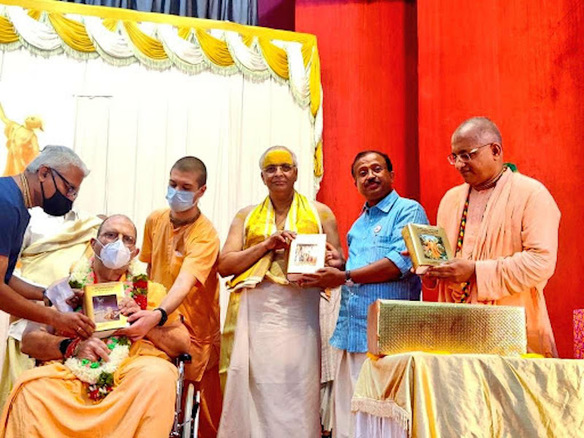 Srila Prabhupada had said that he feels like an “emperor” every time one of his books gets published in a new language. Crowning him once again, the Bhaktivedanta Book Trust (BBT) of Kerala, India, publicly released The Malayalam Chaitanya Charitamrita on the 26th of June 2022 in the Holy Land of Guruvayur in a lavish setting with famed dignitaries.

Mr. V Muraleedharan, Central Minister of Parliamentary Affairs, released the nine volume, opulently finished Chaitanya Charitamrita set . During his keynote address, he said “Chaitanya Mahaprabhu doesn’t see the differences like man and woman, black or white, religion and caste etc, and has given this benediction to everyone”.With over 86,000 followers in his twitter account, he tweeted the following (image) the same day.

In an auditorium filled with more than a thousand devotees, the first copy was received by the Tantri (chief priest) of the Guruvayur Temple. The second recipient of the set was senior counsel HC of Kerala, Adv. Ananda Krishnan Swami, also the managing trustee of the Shankara Institutions from Kalady (birth place of Sri Shankaracharya) and director of the KSIDC.
Also, present on the day was His Holiness Jayapataka Swami Maharaj and His Holiness Bhakti Vinoda Swami Maharaj. Other senior devotees from all over Kerala together numbered more than a 1000.

Jayapataka Swami Maharaj, in his address mentioned that the C.C. volumes are poised to create a revolution in Kerala. He explained the significance of Lord Chaitanya’s mercy and that of his Sankirtan general – His Divine Grace A C Bhaktivedanta Swami Srila Prabhupada.

Bhakti Vinoda Swami Maharaj (ISKCON’s Zonal Secretary for Kerala) has been inspiring devotees in BBT Kerala since the 1990s. Back in 2015, at the 50th anniversary of Srila Prabhupada’s visit to USA, the BBT had similarly released the Srimad Bhagavatam in Malayalam to commemorate the historic visit of Srila Prabhupada, to Kochi port, on the Jaladuta in 1965.

1,250 sets of the Chaitanya Charitamrita were booked with payment much ahead of printing in a special pre-publication offer , prior to this launch event.“Its amazing that we were able to sell out 1250 sets even before they were printed !”

His Holiness Bhakti Vinoda Swami, during his talk said“We are observing 125 years of birth celebrations of Srila Prabhupada today. So we found it very fitting and historical that we offer the teachings of Lord Chaitanya for the first time in Malayalam language, to please him.”

Visit www.bbtkerala.comto get your copies or Click on the link below