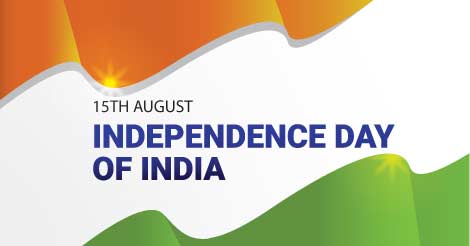 Every year, we celebrate Independence Day - a day when we salute our National flag, sing our National Anthem, rekindle our patriotic ardour to commemorate freedom from slavery, freedom from being ruled by another State or Nation, feedom from physical labour and bondage.
On this ocassion, we need to question ourselves, what is the deeper significance of the word 'Independence'?  How should we practically imply this word so that it can factually transform our lives and we start experiencing actual freedom from quarrel and hypocrisy which is still present in the minds of conditioned souls?
Complete independence means situation in one's own constitutional position. The real independence of a living entity, who is part and parcel of the Supreme Personality of Godhead, is to remain always dependent on the Supreme Lord, just like a child who plays in complete independence, guided by his parents, who watch over him. The independence of the conditioned soul does not mean to fight with the obstacles offered by maya, but to surrender to Krishna.
In the material world, everyone is trying to become completely independent simply by fighting against the obstacles offered by maya. This is called the struggle for existence. Real independence is to be reinstated in the service of the Lord. Just contrary to this is material overlordship, which we wrongly take to be independence. Many great political leaders have tried to establish independence, but due to such so-called independence the people's dependence has only increased. The living entity cannot be happy trying to be independent in the material world. One has to surrender, therefore, unto the lotus feet of the Lord and engage in his original, eternal service.
The true test of  independence is when we utilize our independence fruitfully, by becoming free from the negative influences of lust, anger, greed, pride, hatred, jealousy and dovetail our mind, intelligence and senses for the pleasure of the Supreme Lord by chanting His Holy Name, remembering His unlimited qualities and divine pastimes and engaging in unalloyed devotional service.
By sincerely doing so, the veil of ignorance is uncovered and the darkness of illusion is dispelled from our hearts. Therefore, through spiritual association, reading authorized bonafide Vedic texts, by constantly remembering the Lord, we can blissfully raise the flag of our love and devotion to the spiritual sky!
Let's  pray that we all achieve this true independence by the Lord's mercy.
Happy Independence Day!
Tags: independence day, real independence
E-mail me when people leave their comments –
Follow