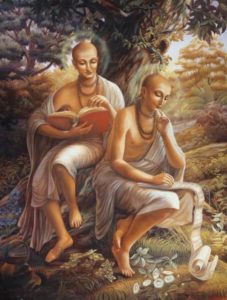 Sri Guru-purnima, or Vyasa-purnima, is the divine disappearance day of Srila Sanatana Gosvami, the eldest of the Six Gosvamis of Vrndavana. The authorized poet Sri Kavi-karnapura, in his book Caitanya-candrodaya-nataka (9.34, 35, 38), quoted in Sri Caitanya-caritamrta (Madhya 24.348–350), tells how Sri Caitanya Mahaprabhu blessed Sanatana Gosvami with His specific mercy.

“Srila Sanatana Gosvami, the elder brother of Srila Rupa Gosvami, was a most important minister in the government of Hussain Shah, the ruler of Bengal, and he was considered a most brilliant gem in that assembly. He possessed all the opulences of a royal position, but he gave up everything just to accept the youthful goddess of renunciation. Although he externally appeared to be a mendicant who had renounced everything, he was filled with the pleasure of devotional service within his heart. Thus he can be compared to a deep lake covered with moss. He was the object of pleasure for all the devotees who knew the science of devotional service.

“As soon as Sanatana Gosvami arrived in front of Lord Caitanya, the Lord, seeing him, became merciful to him. The Lord, who has the complexion of a golden campaka flower, opened His arms and embraced him while expressing great affection.”

“In the course of time, the transcendental news of Krsna’s pastimes in Vrndavana was almost lost. To enunciate explicitly those transcendental pastimes, Sri Caitanya Mahaprabhu empowered Srila Rupa Gosvami and Sanatana Gosvami with the nectar of His mercy to carry out this work in Vrndavana.”

“Srila Sanatana Gosvami is the ideal spiritual master,” Srila Prabhupada explains, “for he delivers one the shelter of the lotus feet of Madana-mohana. Even though one may be unable to travel on the field of Vrndavana due to forgetfulness of his relationship with the Supreme Personality of Godhead, he can get an adequate opportunity to stay in Vrndavana and derive all spiritual benefits by the mercy of Sanatana Gosvami.” (Cc Adi 1.47 purport)

On this auspicious occasion I pray to follow in the footsteps of Srila Sanatana Gosvami, that he may bless me with remembrance of Krishna and Vrndavana and the ability to share with others the mercy of Sri Caitanya Mahaprabhu and Srila Prabhupada.