According to the opinion of some historians, Prahlada Maharaja was born in Treta-yuga in the city of Multan, in the state of Punjab. He was born of Hiranyakashipu, a king of the dynasty of Kashyapa. Prahlada Maharaja was a great devotee of Lord Vishnu, but his father was very much against Vishnu. Because the father and son thus differed in their consciousness, the demon father inflicted all kinds of bodily pain upon Prahlada. When this torture became intolerable, the Supreme Lord appeared as Narasimhadeva and killed the great demon Hiranyakashipu… - Sri Chaitanya-caritamrita, Antya 9.10

Prahladpuri Temple is an ancient Hindu temple located in Multan (now in Pakistan), earlier known as Kashyapapur. It is named after Prahlada and dedicated to Lord Narasimha. The temple of Prahladpuri is said to have been built by Prahlada Maharaj in honor of Lord Narasimha.

The Prahladapuri temple like the Sun Temple of Multan had been destroyed after Muslim conquest of Multan, suffered several material losses and was reduced to a nondescript shrine by the 19th century. 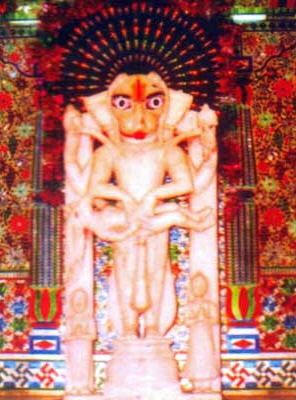 The temple was built on a high platform inside Multan Fort, adjacent to tomb of Hazrat Baha’ul Haq Zakariya, and was before 1992 a prominent landmark of Multan. It had a main hall, circumlocutory and skylights and a large mandapa. The central hall had a replica of the deity under a baldachin (a luxurious type of cloth from Bagdad). Adjacent to temple was dharamshala complex.

Traditions, however, claim that the original temple was a columnar structure and both the roof and the columns supporting it were made of pure gold. It is further stated that for some unknown reason, this entire building sank into ground and over it was built a new temple.

After the partition of India, many Hindus migrated and the affairs of temple were managed by minority Hindus of city. The original deity of Lord Narasimha was brought to India by Baba Narayan Das Batra from Multan at the time of partition in 1947. The deity is now at Haridwar (Narasimhadham Road).

In 1992, the temple was completely destroyed by mob in retaliation of news of Babri Masjid demolition in India. Many peaceful protests were held by minority organizations and have requested the government of Pakistan to restore this ancient temple of importance.