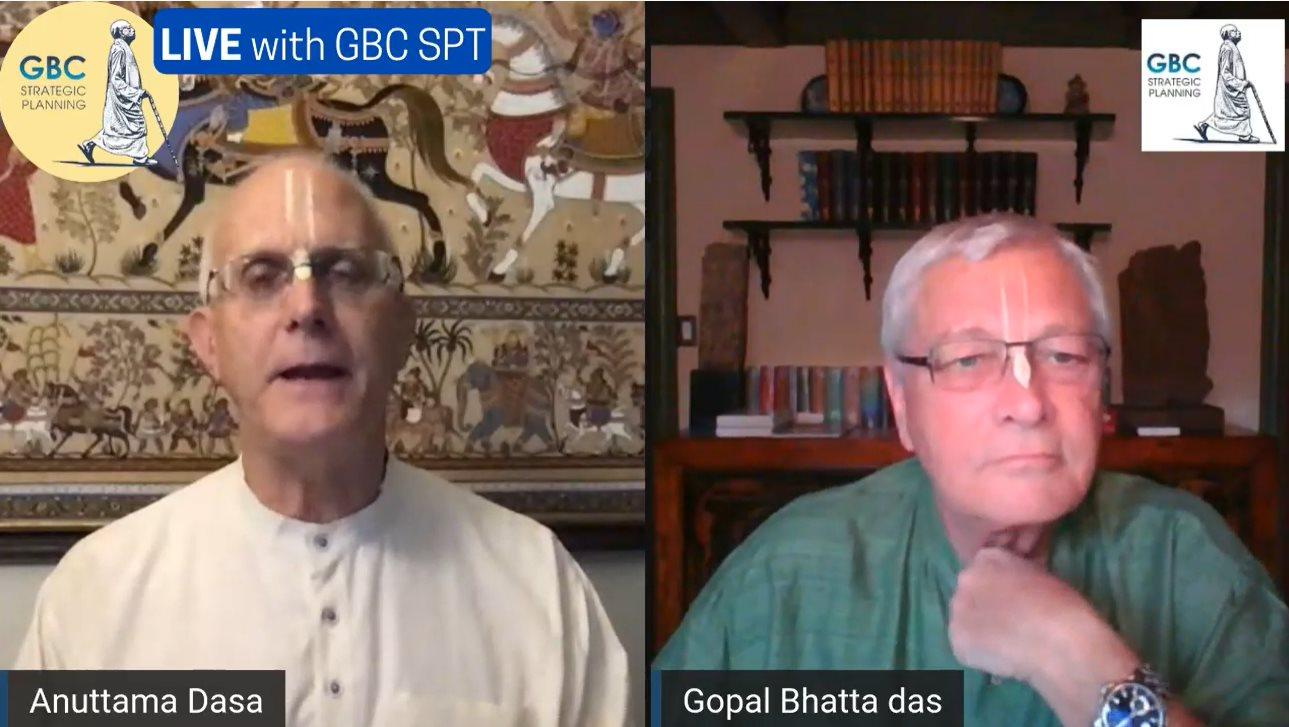 We are pleased to have Anuttama Das for our upcoming “Ask a GBC” series. Here is an amazing opportunity to meet and hear from the people who are behind the policies in ISKCON and ask questions as he is being interviewed by Gopal Bhatta Das.

About Anuttama Das
As a college student in Political Science and Social Science at Michigan State University and the University of Michigan, USA, Anuttama Dasa began to search for answers to the most important questions in life. After exploring varied spiritual traditions ranging from Zen Buddhism to Methodism, he decided to pledge himself to a life of serious spiritual practice and entered the ISKCON Ashrama in Denver, Colorado in 1975.
Remaining at first a skeptic, Anuttama vowed after his first night at the Temple that he would not return to the previous lifestyle he’d found unfulfilling and would only leave the Ashrama if he found a better path to God. Anuttama was formally initiated into the Vaishnava order by ISKCON’s Founder-Acarya, Srila Prabhupada, in Vrindavan, India in 1976, and has remained committed to the discipline of Bhakti-yoga ever since.
Anuttama soon became leader of the Men’s Ashrama community in Denver, and he became President of the Denver Temple in 1983. Under his supervision, Hare Krishna Food for Life was established in Denver and was distributing 10,000 free meals to the needy and homeless each month; ISKCON Colorado hosted the expansive annual Festival of India; and the Temple participated in major Denver events such as the St. Patrick’s Day Parade with an entry of a locally built, traditional 40′ high Rathayatra Cart. Anuttama also oversaw the opening of Govinda’s Buffet, which offered sanctified vegetarian food to congregational members, neighbors, and officials from nearby local government and hospital offices.
Anuttama Dasa joined the ISKCON Governing Body Commission (GBC) in 2000 and served as its Chairman in 2014-2015. Today his zonal assignments include Delaware, Maryland, Washington, D.C., Illinois, Missouri, and co-GBC in West Virginia and eastern Pennsylvania. He enacts his leadership goals globally by teaching seminars including: “ISKCON’s Leadership and Management,” “ISKCON Communications Course,” “The Guru Seminar,” and the “ISKCON Disciples Course,” all of which he helped co-author with teams of other senior Vaishnavas.
Besides his GBC duties, Anuttama has served as ISKCON’s International Director of Communications for twenty years. He is a regular contributor and senior editor for ISKCON News and has authored articles for the ISKCON Communications Journal and several interfaith publications outside of ISKCON. Anuttama has been interviewed by multiple media outlets including BBC, Fox News, ABC, Larry King Live, and the Washington Post.
Anuttama is active in several religious freedom initiatives and leads ISKCON in networking with government and non-government organizations in Washington, D.C., as well as interfacing with the United Nations in New York. Anuttama is also a Board Member of the Religion Communicators Council and Religions for Peace USA, as well as an Advisor to the Religious Freedom Institute. He also co-founded the annual Vaishnava-Christian Dialogues (USA and India) and Vaishnava-Muslim Dialogue (USA).
Anuttama and his wife, Rukmini Devi Dasi, live in Silver Spring, Maryland, near their son Gauravani, daughter-in-law Vrinda, and three grandchildren. They attend the local ISKCON temple in Potomac, Maryland.
“ISKCON and the Vaishnava tradition have great gifts to share. I have faith that as ISKCON devotees become more and more qualified to follow and represent Srila Prabhupada and Sri Caitanya Mahaprabhu, the great culture of Bhakti that they brought to the world will have many tangible and long lasting positive effects.”