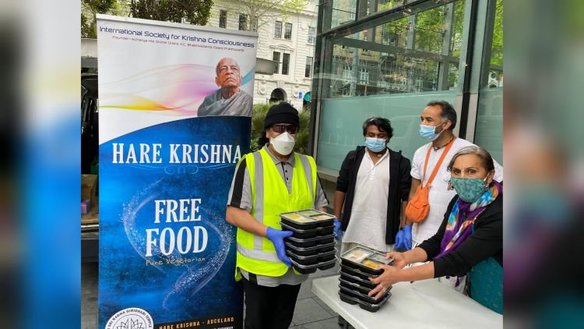 After being virtually free of Covid-19 for most of the pandemic, New Zealand instituted a lockdown in August after discovering its first case in six months. Auckland, the epicenter of the outbreak, has remained in lockdown for over 90 days now, while most of the rest of the country has been living with minimal restrictions. Domestic borders around Auckland are set to reopen from December 15th for fully vaccinated people and those with negative test results. Meanwhile, ISKCON devotees in Auckland have been feeding prasadam to thousands during trying times.

“We thought, we can’t just sit around the farm and do nothing,” says Auckland temple president Kalasamvara Das. “We decided to try and distribute prasadam. Because you weren't allowed out of your suburb, we had to get permission from government officials to go to different suburbs around Auckland. We contacted the Minister of Health and she was really impressed because we planned to feed a few hundred people at a time. We explained that we were financing it mainly through donations because a lot of the devotees here like to donate for free food distribution.”