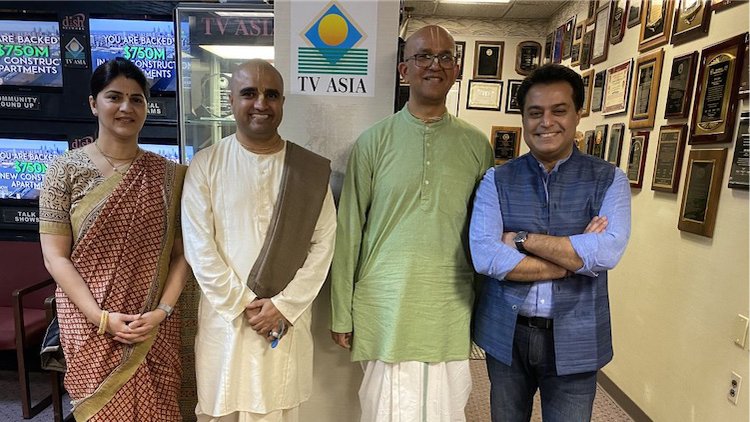 First founded in the UK in 1990, TV Asia was also the first coast-to-coast entertainment and information channel for the South Asian community settled in the U.S. It airs regularly scheduled programs in Hindi, English, Gujarati and other regional languages 24 hours a day, seven days a week.

After the devotees opened with a short Hare Krishna mantra kirtan, the host introduced the topic of the day – Peace.

“He expressed that it would be nice to start the new decade on a spiritual and positive note, and asked each of us what ‘Peace’ meant to us,” says Madanagopala.

Among the answers, Manasi Ganga said, “Peace means to know that there is someone out there who is looking out for me. I feel a sense of security and peace knowing that Krishna will take care of me.”

Meanwhile Madanagopala responded, “As Krishna teaches us in the Gita, asantasya kutah sukham, there cannot be happiness without peace. So peace, which comes from cultivating Krishna consciousness, allows us to experience real happiness in life.”

The host then took calls from Portland, OR, Long Island NY, Allentown PA and other areas. One caller asked how fights amongst members of different religions can be avoided, to which Madanagopala answered, “In all religions, the essence is love of God. If we develop love, then love overpowers and saturates the atmosphere so much that peace and happiness come as natural byproducts.”

Another caller, from Pennsylvania, said, “I was fortunate to be in touch with ISKCON back in 1984 and got the Bhagavad gita As It is and enjoyed reading it. The Lord is an ocean of peace. What can you elaborate on that and how can we access some of that peace? What is the process?”

Nilamni Das resplied, “We are eternally blissful and peaceful in our natural state. But because we have forgotten our relationship with Krishna, and because our father is God Himself, we feel anxiety and difficulty. But by the gradual process of of bhakti and cultivation of knowledge we become more and more peaceful and happy.” 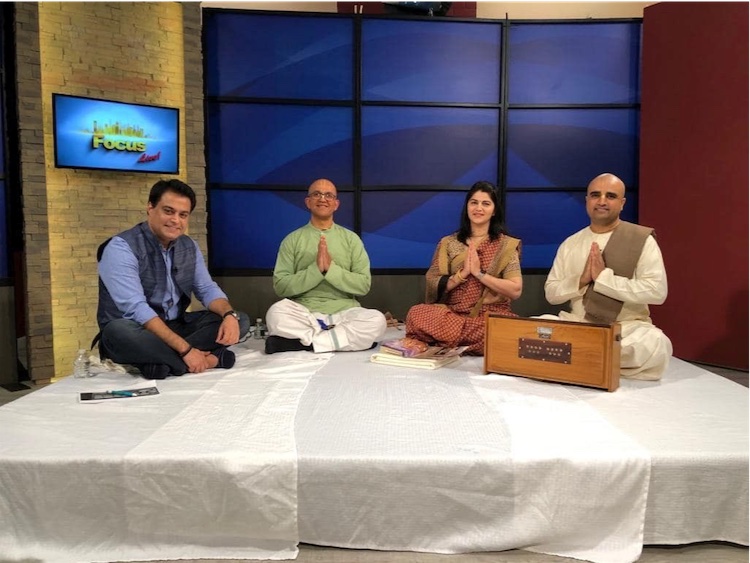 The host also asked several other questions about the practice of Krishna consciousness and what makes ISKCON unique. He was particularly interested in learning about the youth and next generation.

“How is the young generation embracing Krishna consciousness and how much are they realizing the depth of this peace?” he asked. “I see generally the younger generation tend to be disturbed and restless.”

“We would like to invite all our viewers to take spirituality more seriously,” Nilamani replied. “This is the way to attain peace and happiness, not only for yourself but for the children and next generation youth. I can speak for my own children who have grown up in this ISKCON movement, and imbibed these values by going to temple, attending Sunday School and doing fun things in this atmosphere. It has to fun and also genuine. Then they will carry it in their hearts for the rest of their lives.”

As part of the program, the host also showed several relevant Youtube videos including Yadunath Dasa’s video on 50 years of ISKCON, and some kirtan videos. The show concluded with devotees singing the Jaya Radha Madhava bhajan.

“The host was very grateful and thoroughly appreciated our answers as well as the kirtans that we performed,” Madanagopala says. “He mentioned that he will look forward to having us on his show again to discuss other such topics sometime later this year.”

Several viewers – some ISKCON members themselves -- reached out to the devotees after the show with positive feedback, such as:

“You did an excellent job describing the concept of peace and explaining the Gita.”

“Keep up the good work. We watched the show and really liked the fact that you got to do kirtan and demonstrate japa meditation.”

“This is wonderful. It is a great service to ISKCON and Srila Prabhupada! Such wide exposure and coverage for our movement and temples.”

Speaking on behalf of the three devotees who appeared on the show, Madanagopala says, “We hope that thousands of viewers learned about ISKCON and its activities worldwide and were hopefully impressed enough by our responses, kirtan and presentation to want to learn more and perhaps attend an ISKCON program or visit a center.”