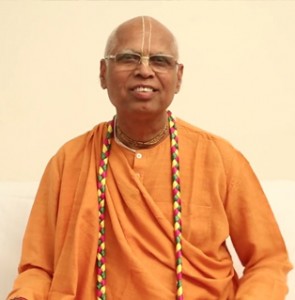 It is my great pleasure to inform you that the first online Nityananda Trayodasi Festival hosted by the Kirtan Ministry was a resounding success. And the Ekadasi Sravana-Kirtana Festival is slowly, but surely becoming a part of devotees’ Ekadasi sadhana.

The story of how the Hare Krishna movement came to Africa is captured with much enthusiasm by Brahmananda Swami, who Srila Prabhupada asked to preach in Africa in early 1971. When Srila Prabhupada visited Nairobi in the same year, he remarked that it was one of the most wonderful places in the world. Srila Prabhupada encouraged preaching directly to the African people and he strongly believed that this was “our real business in Africa.” I am pleased to report that ISKCON Northern Nigeria held a colourful Kirtan Mela in the village of Goningora.

Read about how The Living Name by HH Sacinandana Swami continues to inspire devotees at a holy name retreat at Surabhi Kunja, in Godrumdvipa, Mayapur.

Equally memorable was the Ekadasi Sravana-Kirtana festival which takes place twice every month. Do not forget to peruse through the Readers Reviews on Mahatma Prabhu’s Japa retreat. Let us all be helplessly drawn to the holy name. After all, Krsna decrees this very clearly, “Of sacrifices, I am the chanting of the holy name” (Bhagavad Gita, 10:25). I am certain you will feel inspired to join the next one. From the feedback received, these decisive online initiatives by the Kirtan Ministry is giving devotees the opportunity to perform devotional service, acquire a deeper understanding of these festivals and experience spiritual bliss from sankirtana.

Do check out our new section entitled Inspirational Resources which is a storehouse of nectar.

Your feedback is very important to us, so do share your thoughts and comments. This will assist us in improving our service to the holy name and for your pleasure.

Gaura Purnima means “Golden Full Moon,” signifying that Sri Caitanya took birth at the time of full moonrise. This moment marks the rising of the splendid moon above the horizon. This year we celebrate the phenomenal 535th Birth Anniversary of Caitanya Mahaprabhu. Lord Caitanya is Lord Krishna in His most merciful feature, and on this sacred day devotees all over the world immerse themselves in chanting, dancing and spreading Harinama Sankirtan to invoke His grace. This awakens Prema Bhakti, which represents the unconditional love of God.

I wish all of you a wonderful Gaura Purnima Festival and I pray that Gauranga Mahaprabhu showers His unlimited blessings upon each one of you.

Chant Hare Krishna and be happy!