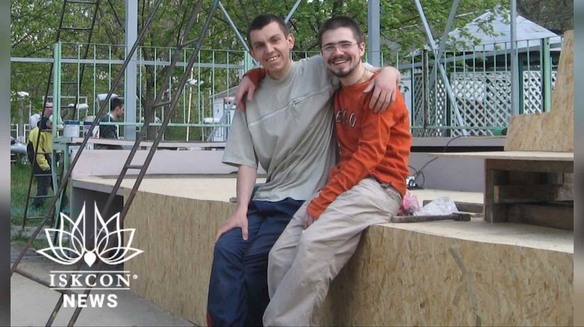 On July 22nd, a Memorial Service for Krishna Tattva das and Madana Gopal das took place. The devotees died as a result of a missile attack in Alchevsk, Donbass region. According to a Reuters news report of July 17th, the missiles originated from Ukraine’s armed forces.

The survivor of the attack, Arjuna das, is recovering in the hospital. He spoke on social networks about what had happened. According to Arjuna das, on the evening of July 16th, they had just returned from Severodonetsk. There were three of them in the car. As soon as they entered the territory of the Food For Life kitchen, the shelling began, and everyone scattered. Arjuna hid under a wall to hide from the shards. He fell to the ground, and bricks rained down on him. He understood that the building was hit. There was no way to breathe or move, there was no light, no air. He could not even push the rocks from over him. After about five minutes he blacked out and woke up only when they were pulling him out from under the rubble. He was put in an ambulance and brought to the hospital.