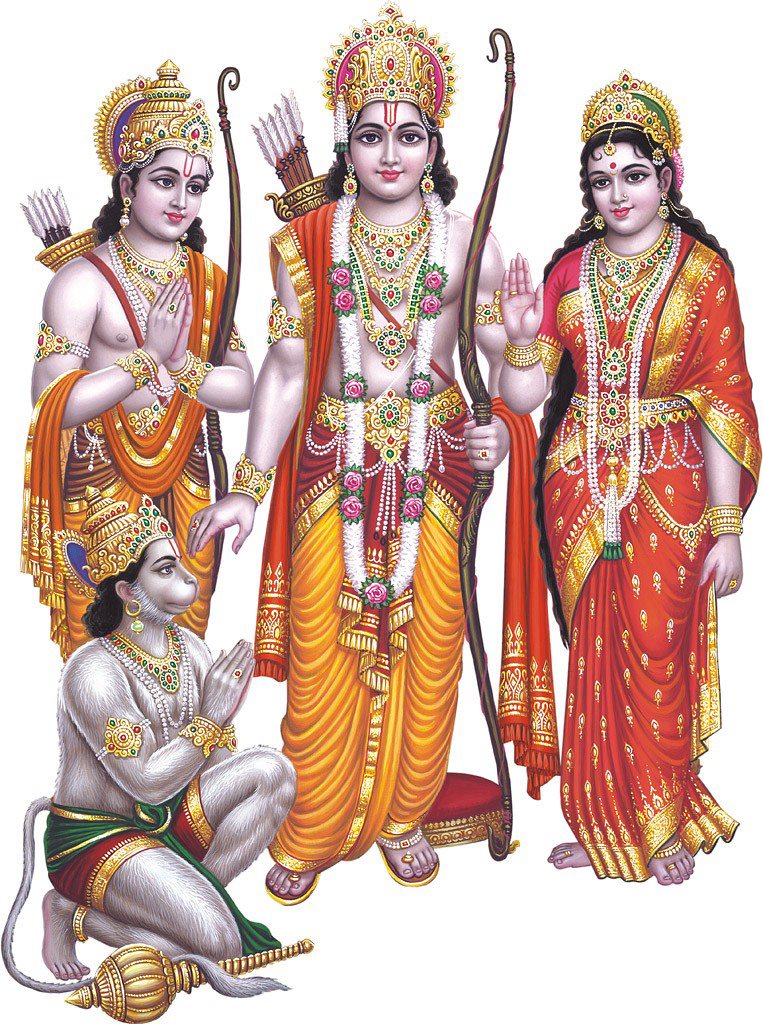 The Supreme Personality of Godhead, Lord Ramachandra
Appeared on this earth in the lineage of Raghukula, in Ayodhya
As the son of King Dasharath and Queen Kaushalya
Elder to the princes Bharat, Lakshmana and Shatrughna

He is ever seen in the company of Mahalaksmi as Sita
His eternal servitor Hanuman, and loving brother Lakshmana
Both brothers wielded a bow and arrows and other weapons
As shatriyas, it was their bounden duty to protect their citizens

Lord Ram is maryada purushottam, the most perfect among human beings
In which role He traversed the earth and engaged with all earthly beings
Compassionate to the weak, kind to the poor, helpful to those in penury
A nemesis for all demons and miscreants, whom He dispatched vigorously

Out of His great sense of duty, He agreed to spend fourteen years in deportation
Deep in the forest, with Lakshmana and Sita, living in desolate deprivation
They lived on fruits and roots, far away from the luxuries and opulence of the city
They chose the life of hermits, and underwent much hardship and poverty

Towards the end of their banvaas, the demon Ravana took a fancy for mother Sita
By various devious means and subterfuge, he managed to kidnap mother Sita
And imprisoned her in Lanka, where she refused to submit to the demonic desires of Ravana
Eventually Hanumanji found mother Sita, and the Lord led His army towards Lanka

Being a demon, Ravana had not listened to the saintly counsel of brother Vibheeshan
He mounted a counterattack on the army of Lord Ram, but all his efforts were in vain
After a lengthy battle, in which numerous warriors on both sides gave up their life
The Supreme Personality of Godhead, Ram, snuffed out Ravana’s life and rescued His wife

The Lord’s banvaas was at an end, and Ayodhya was His for the asking
He ruled Ayodhya for many years, as a wise, much loved and magnanimous king
To assuage His subjects, He sent mother Sita into exile, and They lived Their lives apart
The Lord never forgot her, and till the end, mother Sita lived on in His heart

Mother Sita had given birth to twin valiant sons, Luv and Kush, who grew up in a hermitage
They ultimately found their great father and were reunited under His love and parentage
The Lord lived a life of service to others, with great humility and sense of duty
His life is an example for all, in Its sacrifice and values which reinforce His great divinity

His great affection for the poor old woman Shabri is a glowing example of love’s expression
Even though of lowly birth, Lord Ram accorded to her the highest platform of pure devotion
Lord Ram, Who is no different from Krishna, thus enacted His transcendental leela on this earth
Ramachandra, the Supreme Personality of Godhead, reigns supreme in every devotee’s heart !