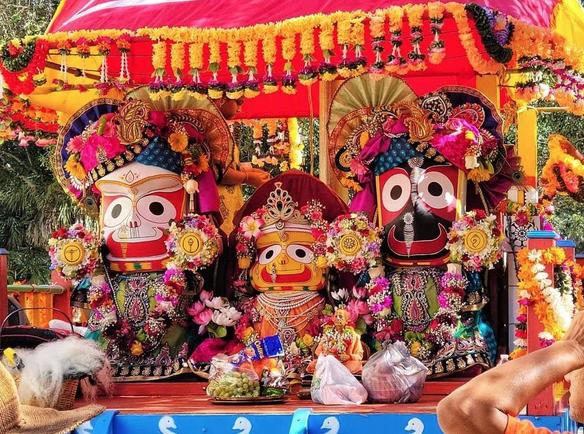 The 8th annual Orlando Rathayatra was held on Wednesday, September 7, 2022 at very unique location of the campus of the University of Central Florida (UCF) in Orlando, Florida.

The Rathayatra took over the beautiful UCF campus and despite it being a weekday, a good number of devotees were present as well as many UCF students. Devotees and well-wishers pulled Lord Jagannath’s cart through the streets, led by a campus police car. Passersby were drawn to the procession by the sounds of the lively kirtan and were invited to join in.

The destination of this Rathayatra was the Student Union building in the middle of the campus. Inside the large Pegusus Ballroom the festival portion of the parade began once the Deities were carried from Their chariot to the large stage. Loud, amplified, and lively chanting of the Hare Krsna mantra attracted students to the ballroom. Simultaneously, while students were served delicious wholesome hot vegetarian lunch prasadam, the stage entertainment began.

After an initial welcome by Bhadra dasa, our Festival of the Chariots coordinator, as well as the Orlando ISKCON Temple President, Dvaipayana dasa, starting the program was Radha Sharma, a student at UCF, whose family is from Alachua, Fl. Radha Sharma treated us to an authentic and beautifully executed bharat-natyam dance.

Next, the Orlando devotee theater group presented a beautiful drama. This was no ordinary drama: it was a mime! Their tee shirts told us who the main characters were: Me, Mind and Kali. The soundtrack along with the acting gave us the picture of the daily routine of “Me” and “the Mind”. They were quite the duo until Kali (as in Kali-yuga, our current age of quarrel and hypocrisy) arrived on the scene with his allurements. First, a picture of beautiful women. Of course, “Me” and “the Mind” fell hard for this trick, but when Kali added the allurement of a bottle of beer things got way more outrageous! Relief came with a knocking on the door: a devotee of the Lord arrived with a copy of Srila Prabhupada’s Bhagavad-gita! “Me” wanted the book, but his Mind didn’t! Meanwhile, “Kali” was pushing “the Mind” to close the book and reject it. Clips of Srila Prabhupada’s pure words helped convince “Me” to accept the book. Later, the devotee came back with a bead bag for “Me” and taught him to chant. Again, “the Mind” was urged by “Kali” to not accept this, but instead distract, distract and distract. In the end, Me finally was able to subdue his Mind, make it his friend and cast away the devilish Kali! Lord Krsna Himself appeared and everyone chanted Hare Krsna! Haribol! The cultural program was closed out by another beautiful performance of bharat-natyam dance by Orlando devotees and an energetic kirtan that had everyone chanting and dancing.

More than 700 plates of prasadam were served. The Festival of the Chariots crew ended the season with a wonderful collaboration with the Orlando devotee community, held at a beautiful venue of a large university campus!