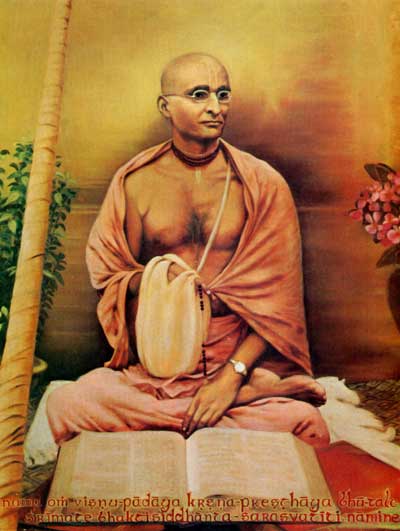 Srila Bhaktisiddhanta Sarasvati Thakur (1874 – 1937), was a preacher of Gaudiya Vaishnavism throughout India in the late nineteenth and early twentieth century. He was born as Bimal Prasad Dutta in the seaside pilgrimage town of Jagannath Puri, Orissa, India. His father was the Vaishnava scholar Bhaktivinoda Thakur, the first to present the teachings of Chaitanyite Vaishnavism to the English speaking world.

In 1918, Siddhanta Sarasvati accepted the renounced order of spiritual life, assuming the title Srila Bhaktisiddhanta Sarasvati Goswami Maharaja. For the purpose of propagating Krishna-bhakti throughout India, he organized the Gaudiya Math, with sixty-four branches throughout the country. The headquarters of his mission, the Caitanya Gaudiya Math, was located in Sridhama Mayapur, the birthplace of Lord Caitanya.

Bhaktisiddhanta Sarasvati Thakur is also the spiritual master of world renowned A.C Bhaktivedanta Swami Prabhupada, who at the age of 69 came to America to fulfil the admonition of his guru, and within a short span of 12 years established 108 centres world wide, and made "Hare Krishna" a household term in the USA, translated texts into English and gave purports to various Sanskrit Vedic texts such as the Bhagavad-Gita and Srimad Bhagavatam - allowing thousands to benefit from learning these valuable ancient teachings.

At the age of only seven Bimala Prasad Datta, had memorized all seven hundred verses of the Bhagavad-gita and could explain each one.

One day the boy took an unoffered mango from the room of the family Deity and ate it. His father chastised him for it upon catching him and told him that it was not proper Vaishnava behavior to eat food that had not first been offered to the Lord. At that time Srila Bhaktisiddhanta Sarasvati, taking his father’s words very seriously, made a vow never to eat mango again. Through his whole life he kept this vow very faithfully. Whenever someone would offer him a mango he would say, “No, I cannot take, I am a great offender”.

At the age of ten, he was initiated by his father into the Hare Krishna mantra and a Narasimhadeva mantra. Later on he attended a special Sanskrit college where he became expert in Sanskrit grammar, Vedic shastra and different views of philosophy.

Due to his lifelong celibacy he had such a clear memory that even in his last days he could reproduce word for word any passage of any book he had read fifty years back.

At college he read all of the books in the library and made private studies into higher mathematics, international history and philosophy and Vedic astronomy. He was such a powerful debater that no one’s arguments could stand up against his vast intellect and scholarship. At the age of twenty-three he opened a school in Calcutta which he called Sarasvata Chatuspathi. Many prominent and scholarly Calcutta gentlemen were among his students. By the time he was twenty-five years old, Bimala Prasada had acquired an impressive reputation as a scholar of Sanskrit, mathematics, and astronomy.

In 1901 Srila Bhativinoda Thakura requested his son to become initiated in the Gayatri mantra and accept a spiritual master. The Thakura had one very beloved disciple, Srila Gaurakisora dasa Babaji Maharaja, a very renowned Vaishnava saint of Navadvipa. It was therefore he who the Thakura requested his son to take initiation from. Srila Bhaktisiddhanta Sarasvati Thakura then approached the babaji for getting initiated, but Gaurakisora dasa Babaji, who had no disciples, out of his infinite humbleness refused to accept such an knowledgeable pandita as Srila Bhaktisiddhanta Sarasvati, when he himself could not even write his own name. So, disappointed, Sarasvati Thakura went back to his father and related to him what had happened, but Thakura Bhaktivinoda sent him out again, and again Srila Bhaktisiddhanta came back with the same news. So this time the Thakura told his son, “Unless you take initiation from Gaurakishora dasa Babaji your life is useless and no longer may you enter this house”. Srila Bhaktisiddhanta Sarasvati then set off with great determination, and meeting Srila Gaurakishora dasa Babaji on a bridge along the road told him that he would jump off the bridge and kill himself if the babaji did not accept him as a disciple. He said to him, “My father has told me that human life is worthless without a spiritual master, so if you refuse to accept me as your disciple I must kill myself”. Upon hearing that and seeing the young man’s sincerity of purpose, the babaji accepted him as his only disciple.

From that year, Srila Bhaktisiddhanta traveled with Thakura Bhaktivinoda in his pilgrimages to all the principle holy places in India. During this time he compiled a Vaishnava encyclopedia named Vaisnava-manjusha. In 1900 he was staying in Puri where he began to publicly preach the holy precepts of Srimad-Bhagavatam. In 1904 Srila Sarasvati Thakura traveled in East Bengal. In 1905 he travailed to the far southern provinces of India, lecturing, preaching, writing, debating, fully absorbed in the fire of propagating the message of Sri
Caitanya Mahaprabhu. In the South he traveled to places such as Simachalam, Madras, Tirupati, Kanchipura and many other places of pilgrimage. His strong preaching gave him such a reputation that his very name would strike terror into the hearts of his philosophical opponents. The perverted and immoral so-called religious activities of different nonsense cults and sects were doomed forever in the presence of Srila Bhaktisiddhanta Sarasvati Thakura.

Srila Bhaktisiddhanta Sarasvati Prabhupada always stressed the importance of publishing and distributing Vaishnava literature as a means of educating the mass of ignorant humanity and in order to facilitate the printing of books and journals he established four printing presses.

In 1918 at the age of fourty-four, Srila Bhaktisiddhanta Sarasvati accepted the title Gosvami Maharaja by taking the renounced order of life, sannyasa. On that same day he established his first Vaishnava monastery, the Caitanya Math at Sridhama Mayapura which became his preaching headquarters.

From the years 1919-1929 he was constantly traveling all over India lecturing to crowds of thousands, debating, destroying various bogus religious sects and performing parikrama (walks to the holy places) with his disciples to different sacred sites, seeking to improve and preserve them. During these travels he installed foot-prints of Lord Caitanya in one hundred and eight places where the Lord had traveled during His sannyasa life. At those spots he also recorded the date when Sri Caitanya had been there.

In 1930 and 1931 a new kind of spiritual education was exhibited for the benefit of the public and especially the illiterate masses. Srila Bhaktisiddanta Sarasvati Prabhupada demonstrated the import and teachings of the Vedic literature by means of huge exhibitions in which pictorial representations by means of dioramas and dolls in life-like manner were employed. These wonderful exhibitions drew at least one hundred thousand visitors daily during a month time period.

In 1936 he was residing in Jagannatha Puri when, at the age of sixty-two, he left this mortal world and again re-entered the loving pastimes of Sri Sri Radha and Krishna in the sweetness of Braja Dham, the spiritual atmosphere.

[This article available at http://www.stephen-knapp.com]