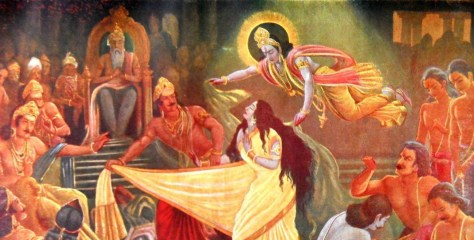 Krsna’s beauty is not only external. His beauty is not only in His form and in His lotus eyes and so on, the beauty is in His very nature. Krsna is very noble. Our Krsna is extremely kind. When Draupadi was in the assembly of the Kurus and Shakuni was carrying out his tricks with the dice and cheating, the Pandavas lost everything. Even Yudhistira himself was totally lost. He lost all his brothers, then he lost himself and then he wagered Draupadi. So Draupadi was saying that it was not a proper bet because Yudhistira, at that point, had already lost himself. But no one in the assembly cared about Draupadi’s declaration that this bet was illegitimate. Dushashan still came and tried to pull out her sari, in an attempt to expose her in public since she was now considered to be a slave. Despite holding onto her sari, what could she possibly do in comparison to Dushashan’s powerful arms? So instead, she just threw her arms in the air and cried, “Hey Govinda!” It was in this moment that Draupadi had totally surrendered to Krsna and so in return, the more sari that Dushashan pulled out, the more sari Krsna supplied. There was unlimited cloth, so much so, that the entire assembly hall filled up with this cloth.

So think about this very deep point. Krsna says that He never forgets His devotee. We keep forgetting everything, and the one thing I especially forget is my passwords. In fact I put all my passwords in one place which is protected by a password, and then I forget that password too. But Krsna does not forget. Krsna says that whenever He remembers how Draupadi surrendered, His appreciation for her increases, and then He remembers her surrender again and again. This way, Krsna’s appreciation is increasing eternally.