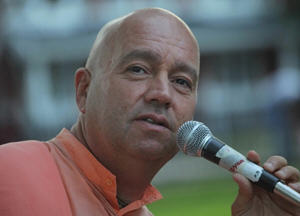 At the final session of our monk sanga (gathering) our facilitator asked us to write down a statement revealing our impressions. This was my off-the-cuff rendition:

“Krishna is fond
When we do bond
In sharing views
We destroy our blues.”

Another verse from the Bhagavad-gita confirms the notion of chatting on spiritual topics. Such activity brings about the greatest joy. That verse is 10.9.

If we talk of practical matters we may get bored. If we talk of purely mundane matters that are demeaning to others one may find stimulation but such subject matter serves to backfire. Then there are philosophical talks, as pandits do – talks which perk the intellectual side of the brain. Finally when one takes shelter of spiritual talks, it compels one to transcend.

It is well-known that your tongue can lead you to hell. When directed to a spiritual channel our words can liberate us. One of our great bhakti teachers, Bhaktivinoda Thakur spoke about the tongue being voracious and the most uncontrollable among the senses. When you engage this tongue in not only chanting but in eating food which is offered to Krishna, it becomes purged and all other sense organs follow in line.

With the sadhus (monks) expressing themselves with words in appreciation of each other, you could feel a light energy, free from stress.

I was asked to read the following letter to the body of monks that have come from all over the world:

Following in the footprints of Lord Caitanya Mahaprabhu:

We must always remember this verse and be as tolerant as the tree, as we execute the Krishna Consciousness Movement. Without this mentality we cannot be successful.

Material nature means dissension and disagreement, especially in this kali yuga. But, for this Krishna consciousness movement its success will depend on agreement, even though there are varieties of engagements. In the material world there are varieties, but there is no agreement. In the spiritual world there are varieties, but there is agreement. That is the difference. The materialist without being able to adjust the varieties and the disagreements makes everything zero. They cannot come into agreement with varieties, but if we keep Krishna in the center, then there will be agreement in varieties. This is called unity in diversity. I am therefore suggesting that all our men meet in Mayapura every year during the birth anniversary of Lord Chaitanya Mahaprabhu. With all GBC and senior men present we should discuss how to make unity in diversity. But, if we fight on account of diversity, then it is simply the material platform. Please try to maintain the philosophy of unity in diversity. That will make our movement successful. One section of men have already gone out, therefore we must be very careful to maintain unity in diversity, and remember the story in Aesop’s Fables of the father of many children with the bundle of sticks. When the father asked his children to break the bundle of sticks wrapped in a bag, none of them could do it. But, when they removed the sticks from the bag, and tried one by one, the sticks were easily broken. So this is the strength in unity. If we are bunched up, we can never be broken, but when divided, then we can become broken very easily.

May the Source be with you!