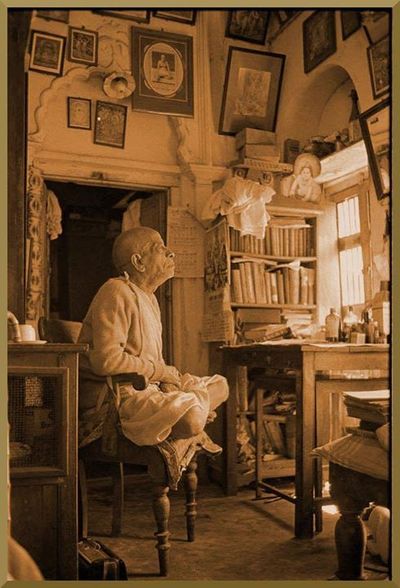 One Muslim boy was reluctant to take a book from me because it was from outside his tradition. I saw him another day, and he said, “I had this dream the Bhagavad-gita came to me glowing.” I again encouraged him to get the book, and after repeated attempts, he finally accepted it.

This knowledge can pull people out of the modes of material nature.

We are still tinged, but we have come a long way.

We are not distributing paper and ink but jewels.

I tell the people, “You cannot put a price on this spiritual wisdom. I gave my life. Give what you can.”

This is an important verse indicating how we should deal with others: “The Lord is very satisfied with His devotee when the devotee greets other people with tolerance, mercy, friendship and equality.” (Srimad-Bhagavatam 4.11.13)

It is not easy to promote Krishna consciousness. People came here to forget Krishna. In prison, people are not glorifying the government.

We have to pray for tolerance and compassion.

Srila Prabhupada wanted pictures in the books for a reason. People are attracted to art.

I show the people different pictures and briefly speak about them: The changing bodies, the saint who sees with equal vision (Wouldn’t it be nice if everybody did?), the picture of the senses as horses drawing the chariot in different directions.

Book distribution is mostly about prayer, before and while you are out distributing.

Vaisesika Prabhu uses this exit mantra. “It has been an honor meeting you. Thank you for your valuable time. Have a wonderful day.” Sometimes hearing that they decide to get a book after all.

Krishna is the best boss. You can try to distribute books all day and not sell a single one, and Krishna will still be pleased.

A book distributor has the qualities of brahmana, ksatriya, and vaisya.

We become purified by remembering Krishna for He is the supreme pure.

Vaisesika Prabhu got only one instruction from Srila Prabhupada, “Read my books.”

We are a giving society. We are giving prasadam, giving the holy name, etc.

The devotee serves more and becomes inspired by Krishna who reciprocates more, and thus the devotee serves even more and gets additional inspiration from Krishna. It continues on like this, forever increasing.

There is a saying that God gives and gives, and forgives, and we get and get, and forget.

I tell the people, both the Christians and the atheists, “We are not trying to change your beliefs.” Of course, it is nice if they join, but we just want them to hear about Krishna, for in that way they will become cleansed.

I sell a lot of books to Christians. I tell the Christians. “Oh, thank God, I thought you were an atheist. It is terrible how atheism is rising these days. These books give a lot of good arguments for the existence of God.”

Maharishi Mahesh Yogi went into meditation for three days, and when he came out they asked him for his realization. He said, “Krishna consciousness is the highest realization.” He also told his teachers if they wanted more, they should see A. C. Bhaktivedanta Swami.

Srila Prabhupada said that you quickly get realization by giving out this knowledge.

If you sincerely pray to help the conditioned souls, it is amazing the number of books that can be distributed.

95% of book distribution is our sadhana.

In the spiritual world, there are only devotees. Therefore, we have to learn how to live with the devotees very nicely here, if we expect Krishna to allow us to live there.

Comment by Rajadharma Prabhu: Kolaveca Sridhara would chant Hare Krishna all night. Annoyed people would throw rotten vegetables at him, but he was so tolerant that he did not care.

We are going out on book distribution to please Krishna, as an offering, the highest offering. Thus before we go out, we pray that Krishna accepts the offering.

Srila Prabhupada said the profession of the neophyte is to bicker.

Comment by Tulasi Prabhu: They say the reason people pray to Hanuman to find lost items is because he found Sita.

Comment by Nitai Caran Prabhu: Also because Hanuman found that medicine on the mountain.

In general at least chant all your rounds before you go out on book distribution, if you cannot read.

No one can know Krishna completely, but a sincere person can, by the grace of Krishna, know something of the Supreme Personality of Godhead.

In the history of varnasrama-dharma, no one has ever had to pay for a mantra, but the TM people charged $35 for a mantra in Prabhupada’s time, and now the price is $1,500.

Srila Prabhupada said a sadhu is someone who is always trying to alleviate the distress of the conditioned souls.

It is interesting that Srila Prabhupada only started one center himself, 26 2nd Avenue. He sent people out to start the others.

If we are tolerant, we can develop compassion.

Thousands of people were in the bhakti-vrksa groups started by Bhaktivinoda Thakura in West Bengal.

Sometimes people object to Krishna inducing a nice guy like Arjuna to fight despite his reluctance to kill his relatives. Krishna did it because He did not want the society to be led by evil leaders who were so cruel they wanted to kill the purest people on the planet, the Pandavas.

We did not know what to do or what not to do until we encountered Srila Prabhupada’s books, and the members of today’s society are in the same state.

As devotees, we are not concerned only with our own good fortune, but we want others to become fortunate.

The main disease in society at present is stress.

There is so much speculation in India, that unless one meets a pure devotee, he will become confused.

Trust or fidelity is one of the most important aspects of a relationship.

Because we have turned away from Krishna and we are now busy enjoying his property, it is difficult for us to attain bhakti.

In many letters Srila Prabhupada advised devotees to read a chapter of Bhagavad-gita every day.

The Silicon Valley temple, which is just a congregation with no temple residents, influenced by Vaisesika Prabhu, gets 200 devotees to come out once a month on book distribution. They are number two in America now, and number one in BBT remittances.

Comment by Acarya Prabhu: Bhakti Vikasa Swami says that one of the best temple presidents they had in the history of London, back in the 1970s, was a book distributor, who went out five days a week on book distribution.