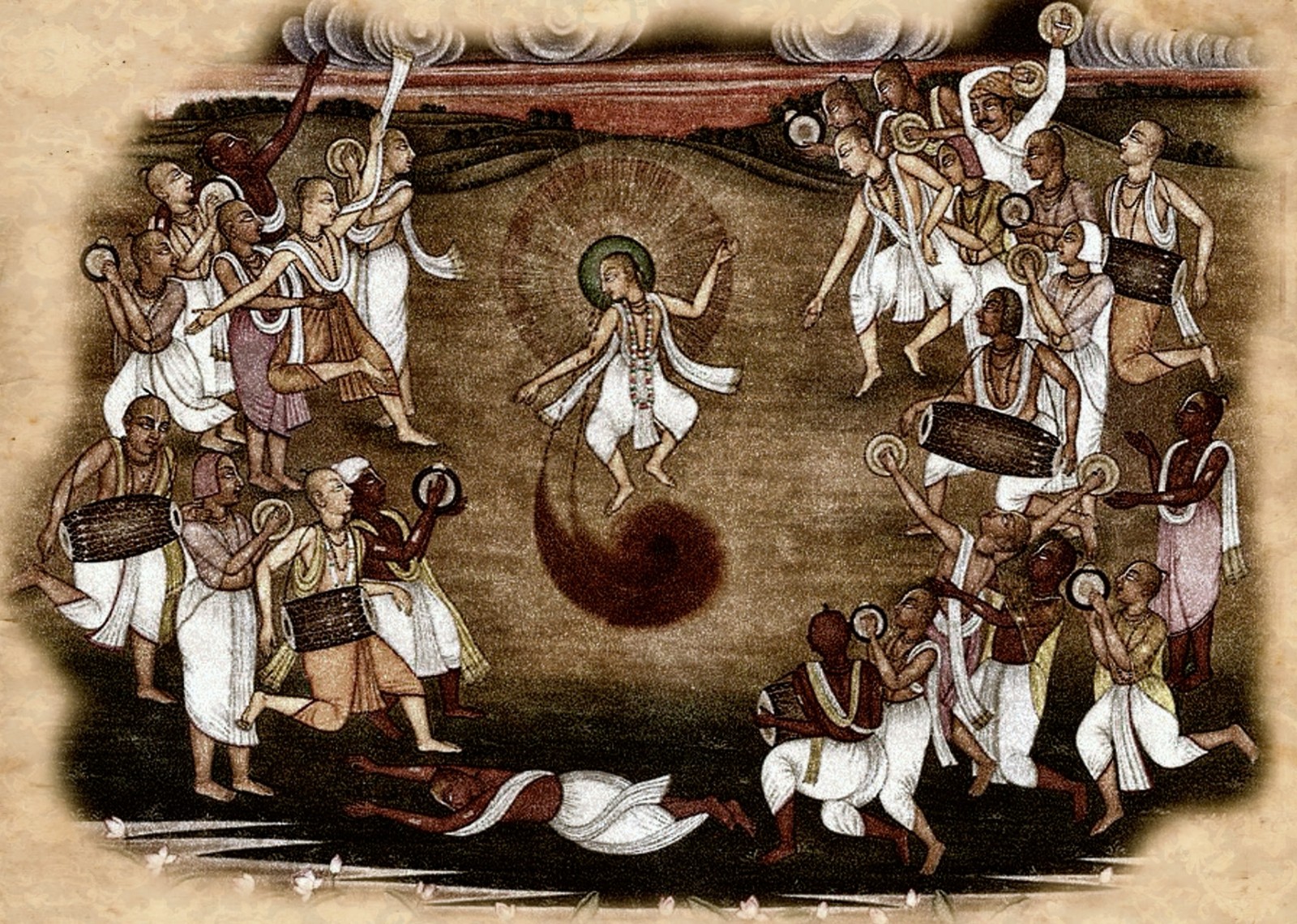 Kirtana is a simple and effective way to commune with God.

The word kirtana means “praise” or “glory” and is the name given to glorification of God in song, especially in call-and-response style. There are different categories of kirtana. For example, nama-kirtana refers to singing God’s sacred names, lila-kirtana celebrates the transcendental activities of God and His associates, sankirtana is group singing, and nagara-sankirtana is public chanting in the streets. There are numerous variations of these.

Closely related is bhajana, or prayerful song. Devotees generally stand or dance while performing kirtana, and they sit to conduct bhajana. In addition, bhajana is generally more subdued than kirtana. Various sects and regions in India attribute different labels to different forms of prayerful song, sometimes defining bhajana as a subcategory of kirtana and vice versa.

Kirtana is a simple and effective way to commune with God. The Padma Purana tells us, “Because Krishna’s holy name and Krishna Himself are nondifferent, the name is fully complete, pure, and eternally liberated.” In the material world, all things are relative and a thing is different from its name, but in the spiritual realm a thing and its name are one. That’s the nature of the Absolute.

The implications here are tremendous. If God and His name are the same, by chanting one can get close to Him in every sense of the word. The chanter is close because God’s name is on his or her lips; the chanter gets purified by close association and becomes godly, cleansed, divinely inspired-thus becoming closer to God’s nature; and the chanter gets close to God through the intimacy of calling His name with love and devotion, achieving the goal of yoga, or linking with Him.

Loving union with God is the ultimate effect of kirtana, but kirtana does not ask us to achieve the highest level at once. Instead, it dutifully takes us there gradually, sometimes in spite of ourselves. Kirtana is joyful at any stage, and it leads to higher and higher modes of spirituality. It gradually takes us beyond the physical, mental, and intellectual strata and situates us in transcendence. Thus, whether we approach chanting as mere entertainment, as a night out, as part of a yogic regimen, or as a method for getting close to God, we benefit from the practice and move upward toward the Supreme.
Kirtana Origins

According to the sages of India, kirtana transcends history: It is “imported from the spiritual realm,” where God is glorified with blissful song and dance. As kirtana makes its way to the material world, we find it in humanity’s earliest cultures and civilizations.

For example, the Vedas and the Upanishads, among the world’s oldest religious texts, describe the power of sound in minute detail, elaborating how certain mantras, when properly recited, reveal Ultimate Reality. Kirtana, then, claims both divine origin and a history traceable to the world’s earliest scriptures.

Vaishnavism, whose chief manifestation in the West is known today as the Hare Krishna movement, developed kirtana into a methodical practice, or science, leading to the goal of yoga. With the help of Vaishnava scriptures, such as the Srimad-Bhagavatam and the Bhagavad-gita, adherents came to understand chanting as a highly technical-if also blissful-discipline through which they could expect definite results on the spiritual path.

The scriptures state that for each world age a specific method of God realization is particularly appropriate: In Satya-yuga, millions of years ago, one attained the Absolute through deep meditation, in Treta-yuga through opulent sacrifices, in Dvapara-yuga through deity worship, and in Kali, the current age, through chanting the holy name of the Lord.

Even the celestial beings mentioned in the Vedic literature want to take part in this celebration of sacred sound. Lord Vishnu, for example, blows His conch shell as a call to spiritual awakening and in His original form as Krishna bewitches all living beings with His silky smooth flute playing. Lord Shiva plays his threatening drum during the dance of cosmic dissolution. Goddess Sarasvati is always depicted with a vina, a stringed instrument, in hand. She is the divine patron of music and bestows blessings on all students of God-centered music. Lord Brahma, Sarasvati’s husband, creates musical scales using the mantras of the Sama Veda and chants om to create the universe.

The idea that material existence is generated through sound resonates with the Bible: “In the beginning was the Word.” (John 1:1) A Vedic text states, “By divine utterance the universe came into being.” (Brihad-aranyaka Upanishad 1.2.4) Vedic texts tell us that sound not only instigates the flow of cosmic creation but plays a significant role in humankind’s ultimate goal: “Liberation through sound,” says the Vedanta-sutra (4.4.22). Hence: kirtana.
Essential Vaishnava Practice

Kirtana is the core practice of Vaishnavas, originating from hoary times and the revelation of the Vedas. Although bhakti (“devotion”) is eternal, it wasn’t until the sixth century CE that it emerged as the core of a vibrant religious movement, with powerful yogis and alluring singer-poets transforming the countryside. They conveyed truths not only in Sanskrit, drawing on the original Vedas, but in vernacular languages, making full use of new compositions and contemporary song. Most productive were the Saivite Nayanars and the Vaishnava Alvars, whose devotional poetry might be seen as first steps in the development of modern kirtana. A bhakti movement was in full flower, emphasizing the heart, the essence, rather than rituals and rigid observances.

Bhakti literature and devotional song spread rapidly, accommodating the growing wave of seekers and spiritual adepts that inundated the land. As a result, four major lineages arose in South India, allowing primeval knowledge to flow north and, eventually, around the world. This was done through commentary and explication, practice and revelation. The four lineages owe a debt of gratitude to the following seers: Ramanuja (1017-1137), of the Sri Sampradaya; Nimbarka (ca. 1130-1200), of the Kumara Sampradaya; Madhva (1238-1317), who appeared in the Brahma Sampradaya; and Vishnu Swami (dates unknown), who reinvigorated the Rudra Sampradaya, later reformulated by Vallabhacharya (1479-1545) as Pushti Marga. Many branches, sub-branches, and diverse traditions sprouted from these essential four. Kirtana is most significant in the line of Sri Chaitanya Mahaprabhu (1486-1533). His Gaudiya Sampradaya, an offshoot of the Brahma-Madhva line, inspired all of India with ecstatic song and dance, illuminating the science of kirtana as never before. The Hare Krishna movement comes in the lineage of Sri Chaitanya.

Sophisticated love poetry, systematic theology, and new revelations came from many quarters. Chief among these, perhaps, was the Gita-Govinda, Jayadeva’s twelfth-century Sanskrit work on the love of Radha and Krishna. Other prominent bhakti poets and singers included Sura Dasa, Tulasi Dasa, Tukarama, Namadeva, Mirabai, Vidyapati, Candidasa, Swami Haridasa, Narottama, and Bhaktivinoda Thakura. Countless others wrote devotional songs about Radha-Krishna, elaborating on divine love as found in the spiritual world. Those who practice kirtana today are forever indebted to them.
The Maha-mantra

The maha-mantra is also considered the greatest chant because unlike other mantras it aims only for service to God. While the chanter of other mantras generally wants some earthly reward-health, daily bread, the protection of loved ones-the chanter of the maha-mantra asks only to be used as God’s instrument, to serve Him in love and devotion without any expectation of return. Srila Prabhupada gives us the following translation: “O Lord, O energy of the Lord, please engage me in Your divine service.”

Since the maha-mantra is composed solely of the names of God, how does one arrive at this translation? Simply put, the names composing the mantra are in the vocative case, used when petitioning or calling out to someone. So Hare means “O Radha,” as Hare is the vocative form of Hara, a name for Radha, who personifies devotion to Krishna. Since Rama is a name for Krishna, the maha-mantra is a heartfelt petition to Radha-Krishna. What does the chanter of the maha-mantra ask of Radha-Krishna? Only for the privilege of serving Them in pure love.
A Deeper Meaning

The maha-mantra is a prayer with great depth that extends from a simple glorification of the Lord to an urgent request: “Please engage me in Your service.”

And yet it goes further still. Great acharyas, pure teachers who have passed down the mantra in disciplic succession, explain it in various deep ways. For example, Dhyanachandra Goswami, one of Lord Chaitanya’s associates, explains it as follows: “Hare Krishna, Hare Krishna”-the first four words of the mantra-refer to Radha and Krishna in union, celebrating Their love together (sambhoga bhava). “Krishna Krishna” signifies Their separation ( vipralambha bhava). Radharani is calling, “Krishna! Krishna! Where is My Krishna? Oh, please tell me, where is My Krishna?” In the next two words, Krishna calls out, too: “Hare! Hare! Where is My Radharani?”

In the first half of the mantra, then, one finds the feelings of union and longing-spiritual emotions that bring intense realization and satisfaction. In the second half of the mantra, the same emotions increase and intensify. Krishna is called Rama because He is the source of all pleasure (rama). He is also called Radha-Ramana, or the joy of Radha.

“Hare Rama, Hare Rama” means that Krishna is feeling ecstasy in the company of His darling Radharani. The divine lovers, Radha and Krishna, are together again, swimming in the reservoir of pleasure simply by being in each other’s company.

But then, “Rama Rama.” They’re separated once again. Radha is crying, “Where is that ecstasy I had with Krishna? Where is He?” She calls out His name twice: “Rama! Rama!” And He is also crying: “Hare! Hare! Where is the ecstasy I felt with Radharani? Where is My beloved?” So in both halves of the mantra there is union and separation. And as one advances spiritually, by engaging in kirtana, one can appreciate these emotions more and more.