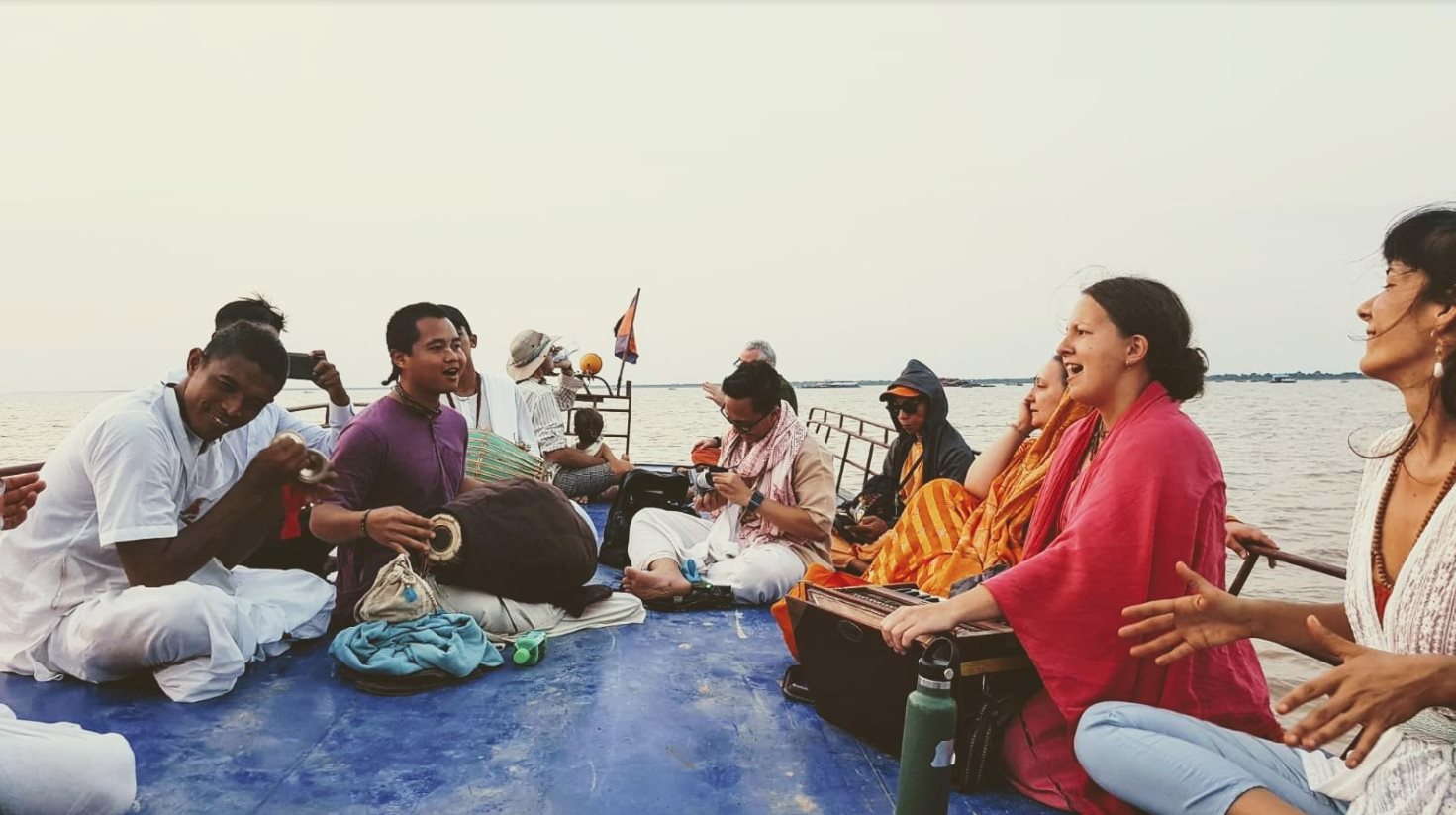 Cambodia, a small country between Thailand and Vietnam, has a population of about sixteen million people. Kala Das has regularly visited this land for the last ten years to share Krishna consciousness with people. He is a great source of inspiration for those few devotees who stay there on a regular basis.

“Kirtan is 2020 Vision for Cambodia“ was organized to bring people’s attention to the local programs so that they can become involved in devotional service to the Lord. The beautiful festival is an initiative of Srila Prabhupada’s disciple, Kala Das who is assisted by two local devotees from Indonesia, Kumudaksha Das and Guna Avatara Das. The festival started on 26 January and continued for five days. Every day we visited different places, predominantly in the area of Siem Reap city. Wherever we went we brought kirtan with us. All the instruments and a portable sound system were always ready to accompany us in kirtan on the streets. 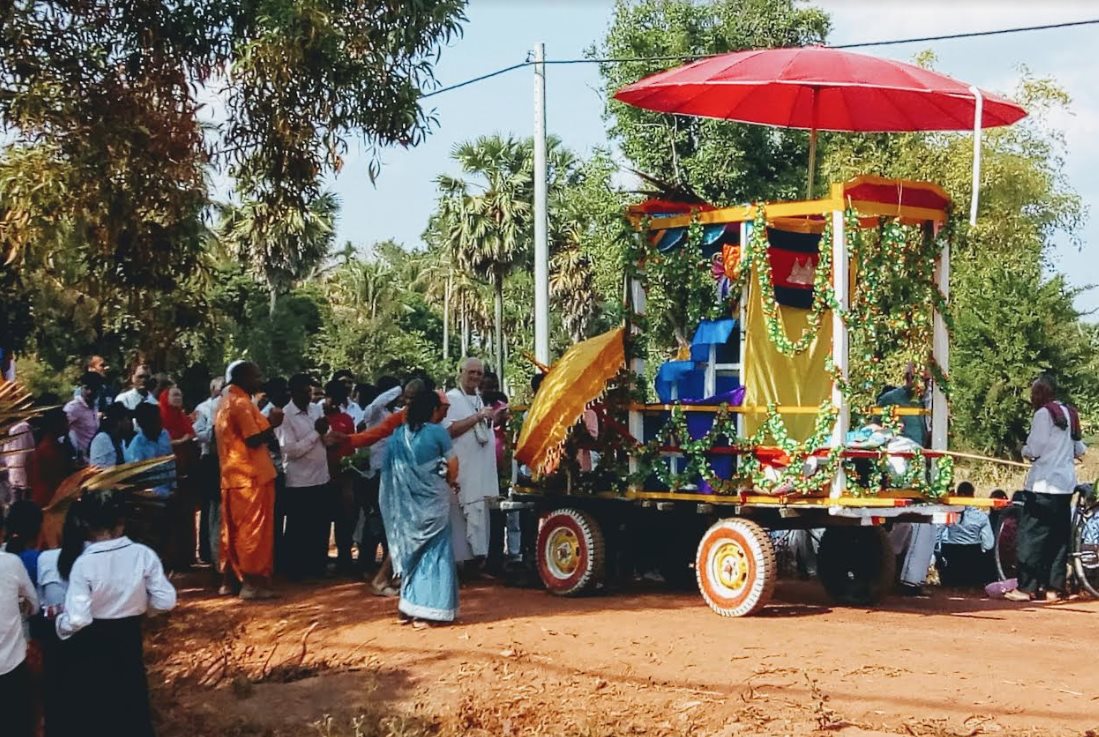 On the first day there was Ratha-Yatra festival in Chob Tatrar Village, Siem Reap. Indian community members, along with Jadabharata Das as a chef, cooked a feast for three-hundred people. In attendance were devotees from Canada, Indonesia, Russia, India and Thailand. Little girls from a village school came to pull the cart of Lords Jagannatha, Baladeva, and Subhadra.

Joel, a founder of Hari Haralaya Yoga Retreat hosted our group for kirtan, krishna-katha, and prasad. On our second day, Kala Das did Go-puja, then everyone fed the cows with bananas. We also had a kirtan on a boat on Tonley Sap, the biggest lake in South Asia. Hours of chanting the Holy Names of Krishna made our souls vibrant and blissful. When our boat reached a bank we got down and continued kirtan. Many people were got down from their boats and passed by our enthusiastic chanting party. Some took a photo with us and others smiled wide. 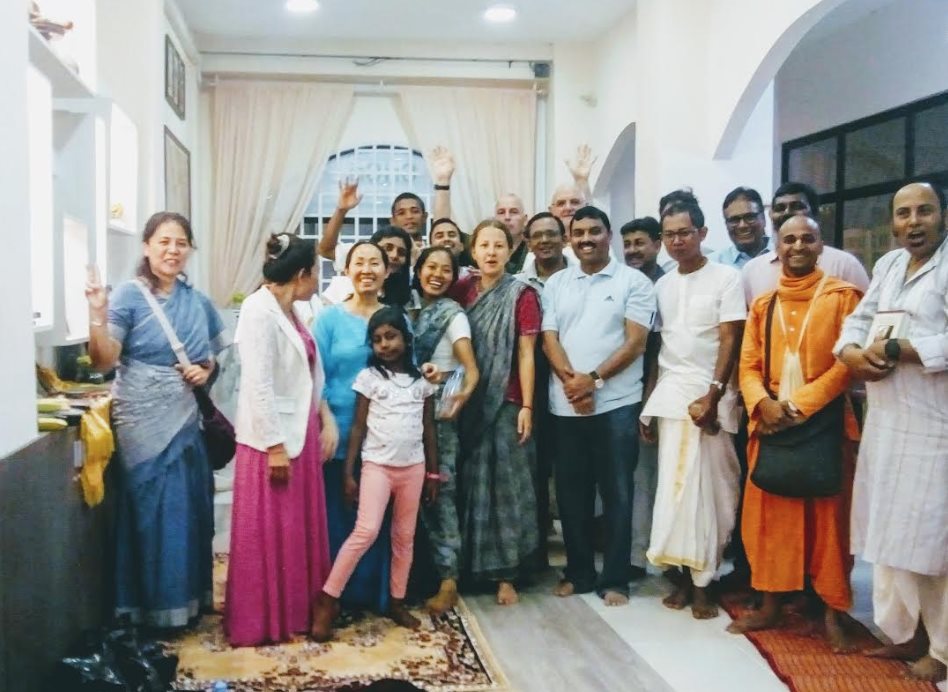 On the thrid day we visited Phnom Kulen Mountain and took a bath in charinamrita of thousands of lingas carved in bedrocks of Kbal Spean river. One of the carvings was Lord Visnu lying on Ananta Sesha and Goddess Laxmi massaging His lotus feet. The carvings were impressive to see outside of India. We did kirtan on one mountaintop and at the foot of the waterfall. Mr. Sharma supplied us supper and Mr. Amarjit provided staff to serve us prasada.

Angkor Wat. Fourth day. We went to see an ancient hindu temple complex dedicated to Lord Vishnu. Vaishnava cuture is very prominent there. We saw Mahabharata and Ramayana episodes carved in stone. Lord Kurma, Mandara Mountain, a scene of the churning of the milk ocean, Krishna lifting Govardhana Hill, Rama, Laxman, Hanuman with Ramachandra on his shoulders, Surgiva, and many other historical events and personalities are carved in stone. It took us more than ten hours to explore the place’s ancient Vaishnava history. Arjuna and Krishna on a chariot and carvings from the Garuda Purana were very beautiful. We heard that in the sixteenth century the Buddhists took over Angkor Wat and replaced the Deity of Lord Vishnu with a deity of Lord Buddha. 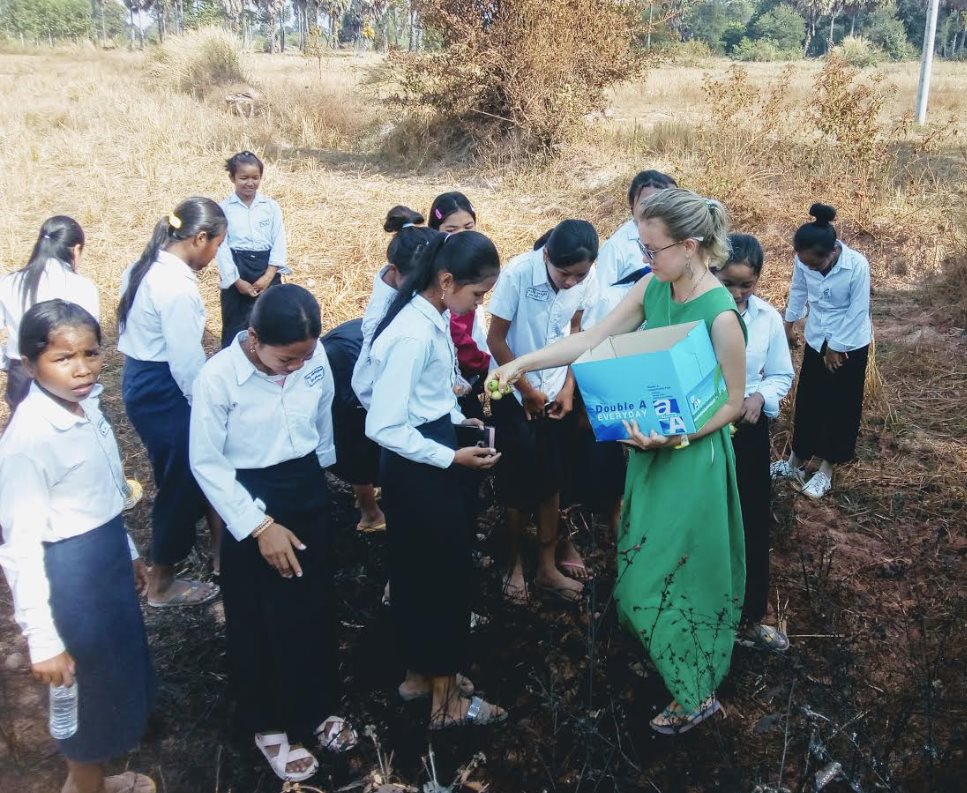 The last day of the Cambodian festival was full of harinama-sankirtana in the city. Siem Reap is a tourist centre of Cambodia. In the morning we chanted the Holy Names of Krishna in front of the Namaste Restaurant which is owned by Mr. Amarjit who kindly provided our sankirtana team with beautiful and delicious prasada breakfast and supper. In the second half of the day, after taking a break, we chanted again as we walked by the tourist spots. As a result of the five-day harinama-sankirtana it began raining at dusk. This was amazing because there hadn’t been any rain for three months. What had surprised us even more was that the rain fell only in the area where we were chanting, not at the airport or a kilometre away at our ashram. 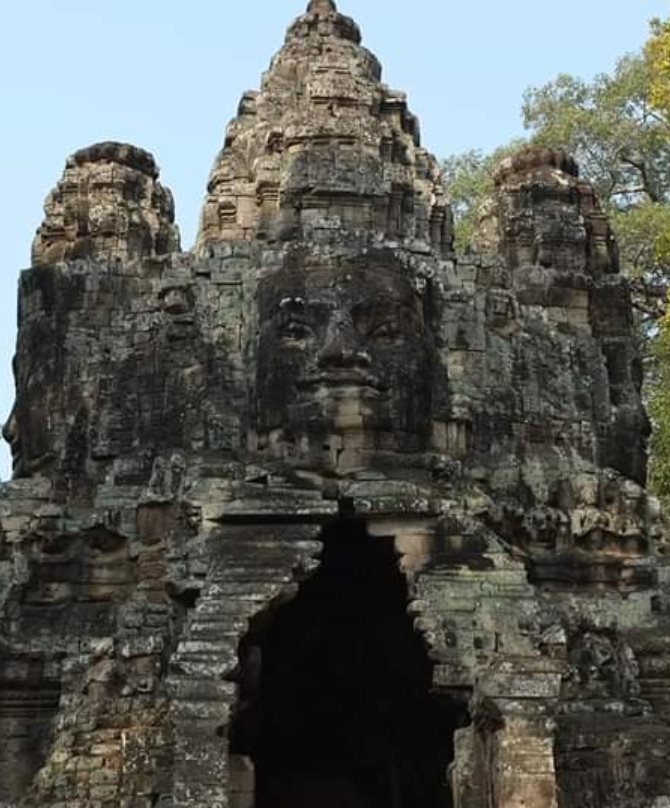