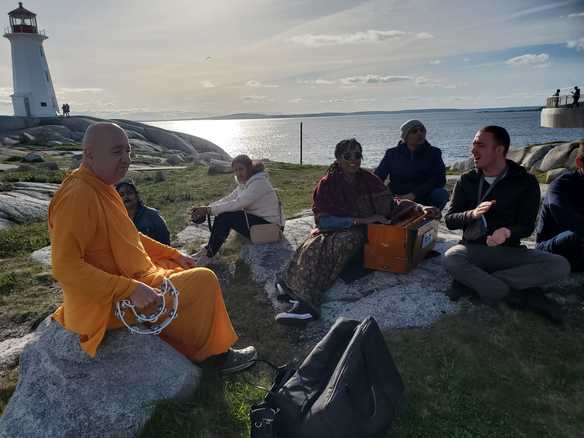 Angiras, who is our gracious host, accepted diksha or initiation this morning. He took on the name Ambarish. He invited many of his friends to the ceremony, conducted by Kadamba Priya, and they were curious about this rite of passage. “Do you change the name on your passport now?” asked one comrade. As I mentioned in my talk at the event, which was a packed crowd in our host’s basement, “It doesn’t really change anything too much except that the candidate picks up speed in his/her spiritual endeavours.”

After the initiation, and after a kirtan in a new devotee’s home in the nearby Timberlea neighbourhood, our group headed for the Mic Mac Mall in Dartmouth, to Decathlon, the sportswear shop, for kirtan once again. The shop is, of course, designed to get people fit in the out-of-doors, and some how or other it viewed our project of mantra meditation as fitting into people’s wellness. They also liked the notion of the Walking Monk speaking about his new book The Saffron Path, which is all about the benefits of introspective walking. Books sold.

From the sports centre we ventured off to Peggy’s Cove, a favorite spot for tourists and peace-seekers alike. There, we converged with another set of devotees, including the newly married couple from yesterday, and we again engaged in kirtan. We pulled out guitar, harmonium, and djembe to serenade seagulls and humans; lovers of the oceanfront and lighthouses. It’s all about getting lit or getting enlightened.

Tags: kirtan
E-mail me when people leave their comments –
Follow