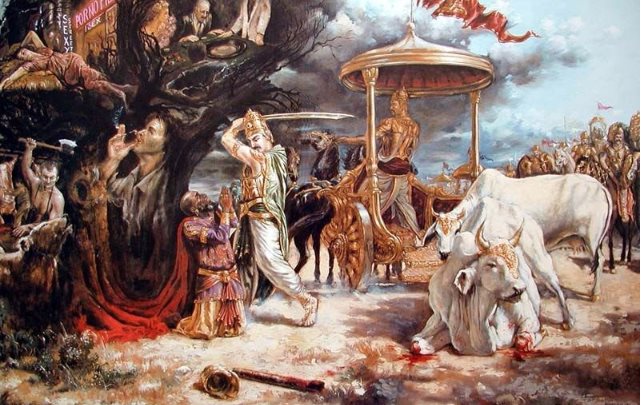 In the first canto of Srimad Bhagavatam, in the dialogue between king Pariksit and Dharma (that appeared in the form of a bull) there is a passage that I struggled to understand for a long time:

“The King said: O you, who are in the form of a bull! You know the truth of religion, and you are speaking according to the principle that the destination intended for the perpetrator of irreligious acts is also intended for one who identifies the perpetrator. You are no other than the personality of religion.” (SB 1.17.22)

At first, this passage doesn’t seem to make much sense. It appears that it implies that if someone is victim of some crime or violence and he reports the perpetrator, asking for justice, he is entitled to receive the same punishment reserved for the criminal, like, for example, if men that is stabbed with a knife would be forced to spend ten years in prison alongside the criminal that stabbed him, or a vicmin of hape would be sentenced to be hanged alongside the rapist. How could this be called justice?

To understand this cryptic verse, first we need to understand the context. Dharma, in the form of a bull and the Earth, in the form of a cow are being beaten by Kali, dressed like a king. Pariksit Maharaja, as a virtuous king, could not stand still after observing this scene. He is in charge of maintaining the religious principles and protecting the citizens against rogues, and therefore he takes his sword and prepares to punish the offender.

To get evidence, he asks the bull to tell who was beating him. It seems like an obvious situation: Kali is right there, with a club in hand and the bull is all blooded, with three of his legs broken. It seems like a clear case of flagrante delicto, where the criminal is caught with red hands.

However, when the king ask the bull to point out the culprit, he started speaking in a cryptic way instead of giving a direct answer:

”O greatest among human beings, it is very difficult to ascertain the particular miscreant who has caused our sufferings, because we are bewildered by all the different opinions of theoretical philosophers.

There are also some thinkers who believe that no one can ascertain the cause of distress by argumentation, nor know it by imagination, nor express it by words. O sage amongst kings, judge for yourself by thinking over all this with your own intelligence.”

This is actually a very deep philosophical point. If something happens to us, who is the culprit? Would be the three modes of nature, who propelled the criminal? Would be the material nature itself? Would actually be ourselves, because we are receiving the result of some action that we performed in the past? Maybe it’s just chance, and therefore there is no culprit at all?

The main point is that the law of karma works in a circular way. We perform a certain action, let’s say that we violently attack someone. The person desires revenge, and at a certain point, in some future life, the roles are reversed. We become the victim and the victim becomes the aggressor. We then desire revenge, and in some future life the roles are switched again. We can see that it becomes a loop. In fact, we are caught in this circle since time immemorial, sometimes being in the position of the aggressor, sometimes in the position of the victim. Someone that is a victim of some violence has the right to desire justice, the problem is that to receive justice he has to stay in this material world! That’s why it’s said that “the destination intended for the perpetrator of irreligious acts is also intended for one who identifies the perpetrator”, both have to remain here, one to receive the results of his action and the other to get justice.

That’s why a sage is advised to just tolerate the results of his past karma without becoming disturbed. By forgiving, he breaks the circle. He suffers the reaction for something he did in the past, but without the desire for revenge or justice, he doesn’t become entitled to be in the reverse position in the future. Thus, he becomes free. Christ explained this higuer principle when he spoke about turning the other cheek in his Sermon on the Mount.

This may sound like some kind of impractical pacifism at first, but it actually describes the rationale of a saintly person. If I’m actually receiving justice for some wrongdoing I did in the past, what’s the point of blaming the person that was used as the instrument? It would be like hitting myself with a hammer, and then blaming the hammer for what hapenned.

But, how could we apply this in a practical way? Let’s say someone in our community is attacked. Should we just cross our arms and accept that he just received the results of his karma, and that the perpetrator is actually innocent being just an instrument? Of course not. While the victim may act like a saint and just tolerate the offence, without becoming revengefull, the proper authorities have the duty of finding and punishing the perpetrator, otherwise they incur in the sin of neglecting their duty. As Srila Prabhupada explains, this is also good for him, since if he is punished now, he will not have to suffer the consequences of his acts in the future.

We can see this illustrated in the passtime: while Dharma refrained from being angry and accusing Kali, king Pariksit was ready to punish the offender with his sword. That was his duty as a king.

Thus, this mysterious passage of Srimad Bhagavatam actually teaches us a higher principle.