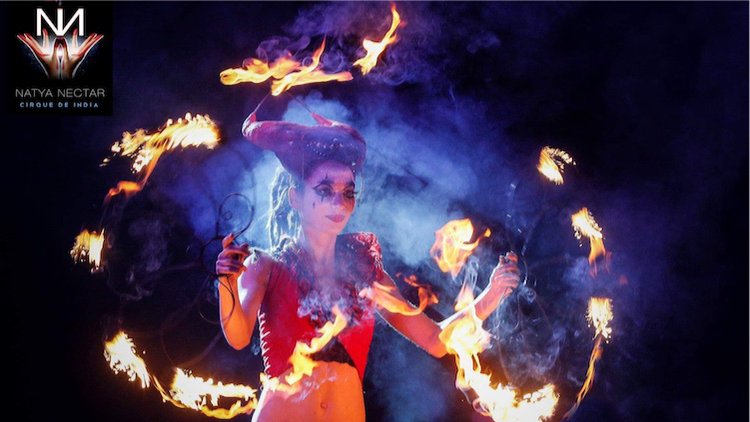 Fifty years ago, in 1969, three couples – Mukunda and Janaki, Gurudas and Yamuna, and Shyamasundara and Malati – were inspired by Srila Prabhupada to start the first ISKCON center in London.

At the time, London was the music capital of the world, with bands like The Beatles, The Rolling Stones, The Who, Cream, and Moody Blues conquering global pop culture.

The devotees knew what they had to do to make an impact, and they approached it fearlessly. Befriending The Beatles, they went on to release the George Harrison-produced “Hare Krishna Mantra” single on the The Beatles Apple record label. On its first day, the record sold 70,000 copies, and the Hare Krishna Mantra instantly became a household name. Within weeks, the devotees had appeared on Top of the Pops, singing “their song.” The Hare Krishna Movement in the UK had taken off!

Eight days before the installation of Sri Sri Radha Londonisvara at the first ISKCON temple in the UK, at Bury Place, the same pioneering devotees performed a kirtan show with their Radha Krishna Temple band in the Hammersmith Town Hall.

Now, on Sunday November 24th 2019 – eight days before the 50th anniversary of Radha Londonisvara’s installation – devotees are set to put on a “Krishna Spectacular” just down the road at the Eventim Apollo in Hammersmith to celebrate 50 years of Hare Krishna in the UK.

Recently restored to its art deco glory, the Apollo has been an iconic music venue for decades – The Beatles played sixty gigs on the very stage where devotees will appear – as well as the site of the famous “Live at the Apollo” stand-up comedy series.

It’s a venue befitting what is set to be a “once-in-a-lifetime” experience, according to organizers. An epic multimedia theatrical production about Bhaktivedanta Swami’s Journey, the Hare Krishnas’ London Story and the Glory of the Bhagavad Gita, Krishna Spectacular at the Apollo will be a unique-one time show for which performers like Natya Nectar, Jahnavi Harrison and Samadhi Dance Company are all preparing bespoke pieces. 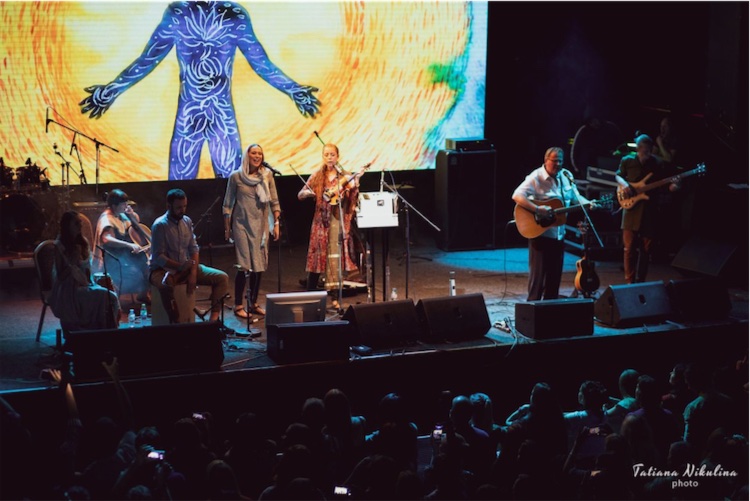 The event will gather over 3,000 people to celebrate and chant together, including three of the original pioneers (Malati Devi, Gurudas Prabhu and Shyamasundar Prabhu), Radhanatha Swami and over 300 Prabhupada disciples and UK pioneers from all over the country. The event is also expected to attract newcomers, and devotees are invited to bring their work colleagues and family members not affiliated with the Hare Krishna Movement.

On Sunday November 24th, doors will open for Krishna Spectacular at the Apollo at 3pm, and the show will run from 4pm till 8pm.

To begin with, Srila Prabhupada’s murti from the ISKCON-London temple will arrive to a standing ovation, and will be given a prime seat to view the whole show.

A voiceover by senior UK devotee Kripamoya Das will then set the scene, before the first piece, entitled “Abhay,” illustrates Srila Prabhupada’s journey bringing the Bhakti-yoga tradition from Vrindavan, India to the West.

Performed by the award-winning Samadhi Dance Company from the Netherlands, it will incorporate classical and contemporary dance, live music and audio recordings of Srila Prabhupada aboard the Jaladuta, as well as his disciples Tamal Krishna Goswami and Rukmini Devi Dasi.

“We wanted to present Prabhupada as Abhay, in his mood of fearlessness, which is core to being a pioneer,” says show producer Anantacharya Das. “And to show that Prabhupada is the original pioneer, and every generation of his followers can imbibe his fearless mood.” 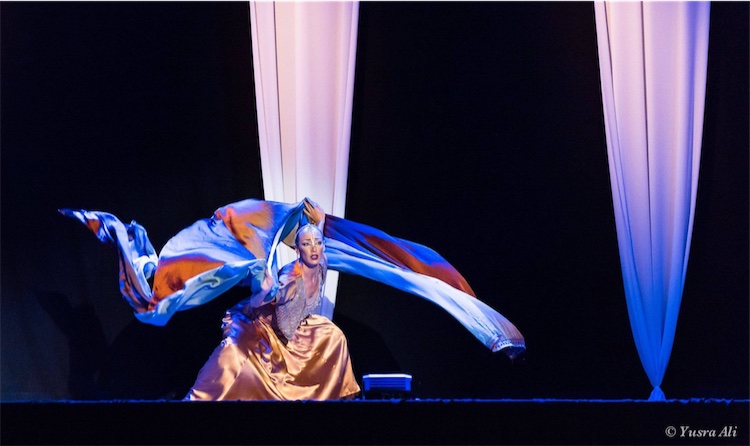 The story of how the Hare Krishnas came to London will then be told through spoken word, vintage photography and videography, and four key dramatic scenes portrayed by actors.

These scenes will include Shyamasundara’s first meeting with George Harrison at Apple Records; the recording and release of the massive-selling Hare Krishna Mantra single; Srila Prabhupada’s arrival in London – where he was greeted like a king, bypassing immigration and riding in a Rolls Royce straight to John Lennon’s Estate; and Krishna’s appearance in London with Sri Sri Radha Londonisvara being installed in the UK’s first ISKCON temple.

Soundtracking the scenes will be four live songs by kirtan artist Jahnavi Jivana Dasi (Jahnavi Harrison) and her band, including a cover of George Harrison’s “Give Me Love” from his Living in the Material World album, and Jahnavi’s own tracks Vrikshavalli Hare Krishna, Hari Om: May We All Be Blessed, and Mama Deva Deva: My Everything.

Performing the scenes, meanwhile, will be young devotees who are all professional actors, having graduated from acting school. They include sisters Anahita and Lalita Hughes as Yamuna and Janaki, Harry Hughes as Mukunda, Namamali Harrison as Gurudas, and John Hubbard as Shyamasundar. Malati Devi will be played by Alice, an acting student who is not a practicing Hare Krishna, but who just happened to visit Bhaktivedanta Manor days before she was asked to play the part. “It can’t be a coincidence,” she said.

After the dramatic re-enactments, the real Malati, Gurudas and Shyamasundara will speak, sharing their memories of the early days. Jayadev’s Mantra Choir, featuring students of the Bhaktivedanta Manor Gurukula as well as children from Geetanjali Academy of Fine Arts, will then conclude the first part of the show by singing the maha-mantra, with the audience joining in. 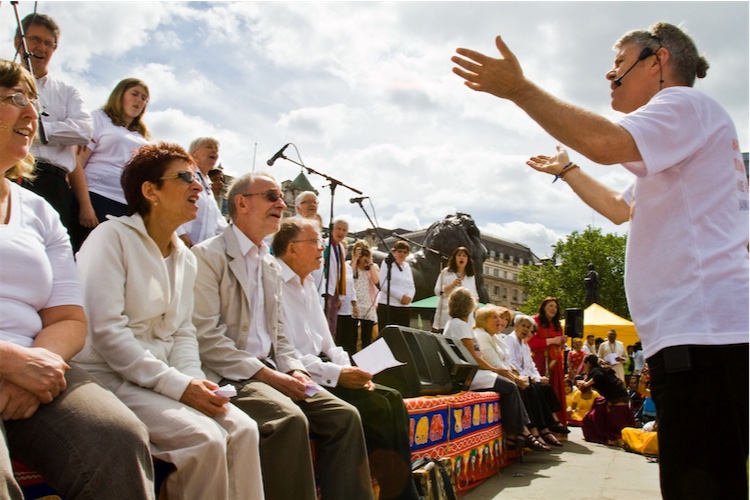 “This may be the first time ever in the UK that we’ve had 3,000 people chanting altogether in one place,” says Anantacharya. “So that’s a really unique feature of this program.”

After an interval, Radhanath Swami will introduce the second part of the Krishna Spectacular with an overview of the science of self-realization, and how the Bhagavad-gita has impacted people around the world.

Natya Nectar, a Delhi-based dance company which was founded by second-generation devotee Goura Prema Riggan and has appeared on India’s Got Talent, will then premier for the first time anywhere in the world its Cirque du Soleil-style show “Reflections.”

Using multimedia, theatrical production with Indian classical and contemporary dance and music, acrobatics, and spoken word poetry with spectacular visual and lighting effects, Reflections illustrates the journey of the Jiva, or living being.

Battling the six enemies of the mind: lust, anger, greed, attachment, pride and jealousy, the Jiva finds himself in a place of complete helplessness. When he surrenders to God, Krishna appears to him in a dream. In the dream, the Jiva becomes Arjuna on the battlefield of Kurukshetra, and Krishna speaks the wisdom of the Bhagavad-gita to him, guiding him to self-realization.

The piece will feature Srikala as the Jiva, Goura Prema as Maya Devi, Vasu Dudakia as Krishna, and Bali Rico in a mystery role, along with live music by Sandipani Muni Das aka Kal Key from his EP “Lifetimes.” 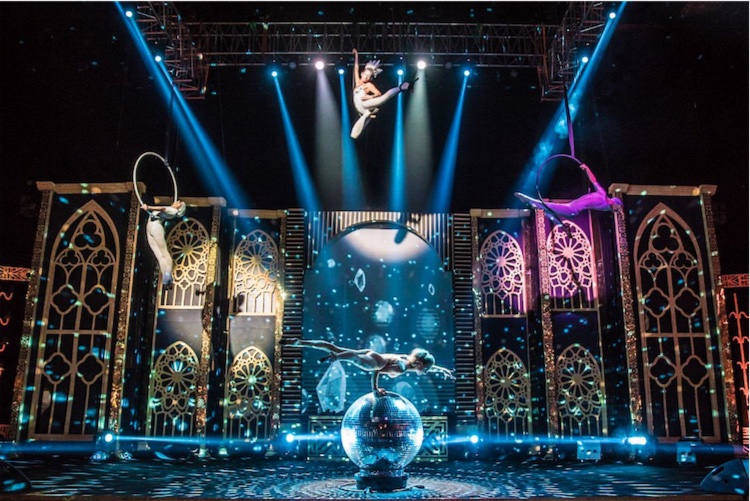 ISKCON-London temple president Jai Nitai Das will then conclude the event by introducing the Govindam recording by Yamuna Devi that is played every morning in ISKCON temples around the world, while Srila Prabhupada in his murti form is carried onstage.

Prabhupada’s pranam mantra, along with an English spoken word version for the benefit of newcomers, will then be chanted, followed by an ecstatic grand finale kirtan led by Kripamoya Das.

Organizers also tease a final “magic moment” which won’t be revealed until the very end of the show.

A special element of the Krishna Spectacular is that every aspect of it has been put together by ISKCON youth.

“They’ve been born and raised in the movement, and then developed and perfected their individual Krishna-given gifts in the performing arts,” Anantacharya says. “Now, Krishna Spectacular is uniting them all to make a unique offering to Srila Prabhupada in service of the people of London and the UK.”

The team’s vision for the show, and for the entire 50th anniversary of ISKCON UK, is to recognize the past; establish a future legacy and vision for Bhakti Yoga in London; inspire the wider community to participate; forge new relationships; and present the culture of Bhakti in a relatable and integrated way.

The latter is inspired by an interaction between Srila Prabhupada and a British journalist, recounted in Shyamasundara’s memoir Chasing Rhinos:

Srila Prabhupada: “Your country, England, ruled over India for many generations, and in the span of that time you took so much of our wealth to London, but you forgot to take our greatest wealth, our spiritual culture. I have come to give you freely what you forgot to take from us.”