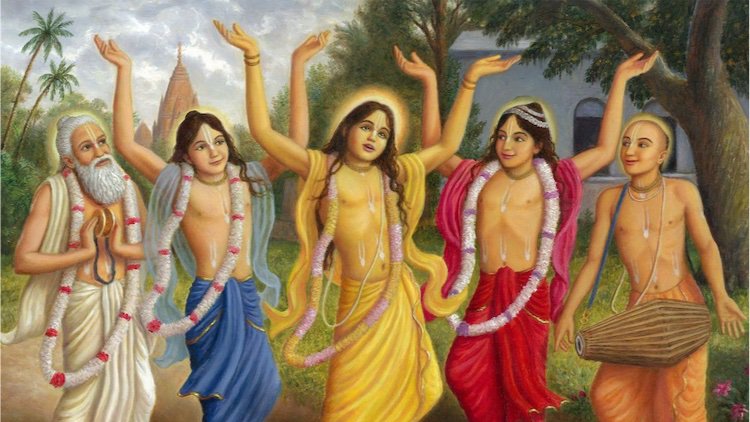 Run for twenty years by the late Syamapriya Dasi, then relaunched in 2009 by current director Bhakti-lata Dasi, the U.S. branch of ISKCON Prison Ministry has been working hard to give hope to the most desperate.

IPM distributes over 5,000 pieces of literature, including Srila Prabhupada’s books and Back to Godhead magazines, to inmates in prisons all over the country every year. Around 300 inmates receive personal letters annually from volunteers like Bhakti-lata, Srutadeva, Ramaniya, Balabhadra, Pritam, Govindanandini, and Nandini Radha. And 150 receive the monthly ten-page newsletter “Freedom,” created by former inmate Bhavananda Das and his wife.

The impact of these efforts is lifechanging, but often missed by the devotee community. Which is why it was essential to replace IPM’s old, outdated website with a brand new, modern one that could properly showcase the inmates’ progress in spiritual life.

Built by Svarbhanu Das, a retired professional in web hosting and development, in collaboration with Bhakti-lata, the new https://iskconprisonministry.org is attractive and easily navigable.

One of the most exciting features is the inmate art gallery. Viewers can click thumbnails of all the inmates’ artwork to display it full screen, and learn the artist’s name, the subject matter, and some interesting details about the piece’s creation. 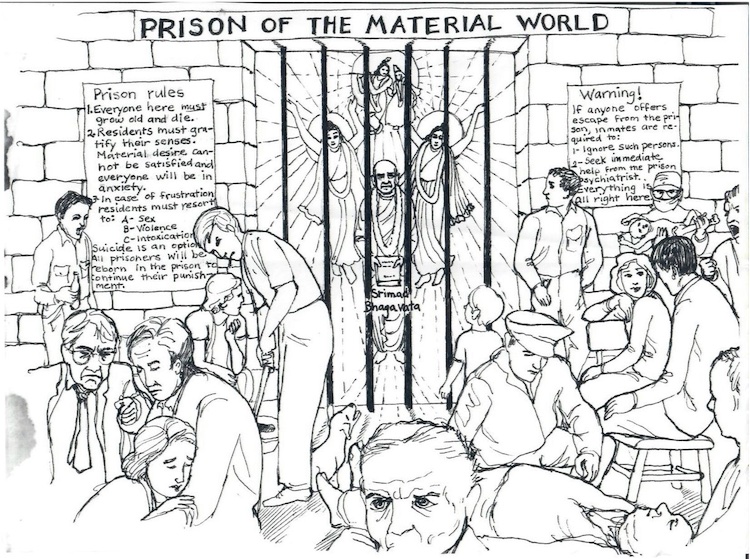 Some are stunningly realistic depictions of Lord Krishna, Srila Prabhupada, and Lord Chaitanya by skilled artists like Brian B. and Burl D.

“They’re even more impressive because inmates are often transferred from one institution to another, and in some they have no access to art supplies,” says Bhakti-lata. “For years, Brian created all his black and white pencil drawings with just ordinary paper and a regular HB pencil, without all the different pencils for detail and range that artists usually have. And they are still out of this world.”

To paint, Brian fashioned his own homemade brush. He created paint using toothpaste as a base; then soaked M&Ms in water and mixed them in to make the different colors. For brown, he used coffee grounds.

“Syamapriya said that his paintings smelled like food,” Bhakti-lata says. “Such ingenuity – nothing can stop devotional service!”

While it goes without saying that people are impressed by the work of artists like Brian and Burl, Bhakti-lata found it equally important to display offerings by inmates who are not artists. 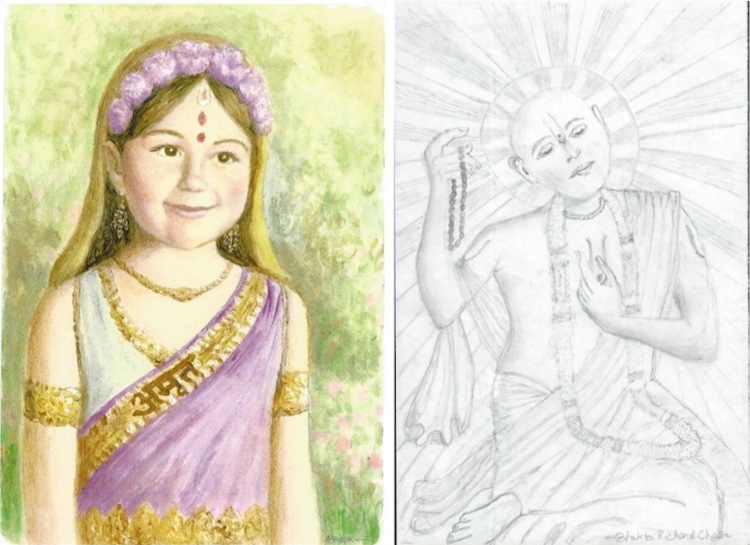 “Their work is more crude, materially speaking,” she says. “But they are so dear to me. Because in my mind, I see an inmate sitting in a cell, surrounded by people absorbed in sex, drugs and TV – and they’re drawing Krishna. Some, like Richard C., had never drawn before in his life – but he was inspired to draw Krishna. That really touches my heart.”

Another inspirational section of the new website displays inmate writings including letters, stories of “How I Came to Krishna Consciousness,” essays and poems. One of the best features is “Excerpts from letters.” On the old website, readers would have scroll down through pages of full letters to try and find something that struck them. Now, they can take a glance at a list of catchy one line quotes, then click on the one that appeals to them, make it expand, and read an inspirational excerpt from an inmate letter.

The list is full of gems from the very first one, a sweet, endearing letter from newcomer Michael W that will make anyone smile. “Devotees, greetings, be blessed, and blessed be Mr. Prabhupada,” he writes. “He really was a gifted man of God… I got your beautiful magazine today. I read it and put the pictures on my wall. I have seven pictures of Kṛṣṇa on my walls. I am just doing my time, one day at a time. I chant on my beads every day. I am a vegetarian and all my food goes to Lord Kṛṣṇa.”

Andre D. in Daytona Beach, Florida writes, “ I really enjoy chanting. I’ve noticed that when I chant it helps calm my mind. I have never experienced anything that calms my mind like chanting. It feels natural to me and I like it.” He adds: “When I read about Krishna Consciousness it confirms the unspoken thoughts and feelings I’ve always had about the subject of spirituality. To me it’s like I’ve encountered the truth I’ve always known but was unable to explain.”

Other inmates have taken to Krishna consciousness so fully that they are now seriously preaching it to others. 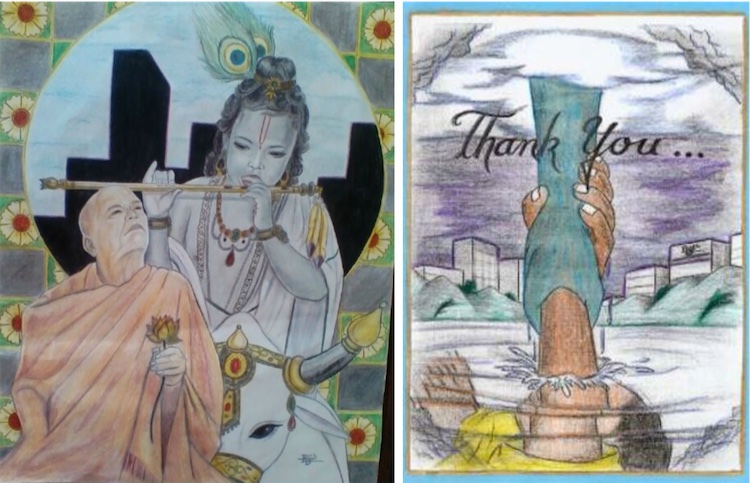 “Our program has grown a lot,” writes James S. in Salem, Oregon. “New men are becoming interested in Kṛṣṇa consciousness. I give a Bhagavad-Gita class every day on the yard. Then we have our own worship service…. We have many interfaith discussions. And so many faiths are coming to our worship service; Christians, Buddhist, Islam, Wicca, and even two Vedanta impersonalists. We all chant Hare Krishna together. And dance in great joy!

At our worship, we try to engage everyone. Like the chapel orderly, by setting up a fan, or to bring a table, something, anything. And the chaplain, who lights the candle. He’s made so much advancement over the past six years, last time he was dancing down the hall, singing Hare Kṛṣṇa maha mantra, matches in hand. Some men bought japa beads at our canteen and chant Hare Kṛṣṇa! They read Prabhupada’s books and preach to their friends. Actually, due to wonderful devotees like you, this whole prison has become a holy Dhama! Because Prabhupada has come in the form of his books, CDs and DVDs.”

Krishna consciousness has also come to women’s prisons. “I took the Bhagavad-Gita and was returned to general population the next day,” writes Carol S. “I sent a few books to another girl in another section, so then these girls got hold of most of those books and they are passing them around like hoarded treasure.”

Finally, the new website includes all the ISKCON Prison Ministry newsletters since 2009, available at the click of a button. Each newsletter features excerpts from letters, appreciation from chaplains, artwork, and a a main article by a volunteer or inmate.

In one, Gerald N, who has been writing to devotees for years, recounted how several times, he had been faced with an angry inmate who wanted to beat him up. When he started chanting the Nrsimhadeva prayers at the top of his lungs, however, a bewildered expression came across the agressor’s face, and he turned around and left. 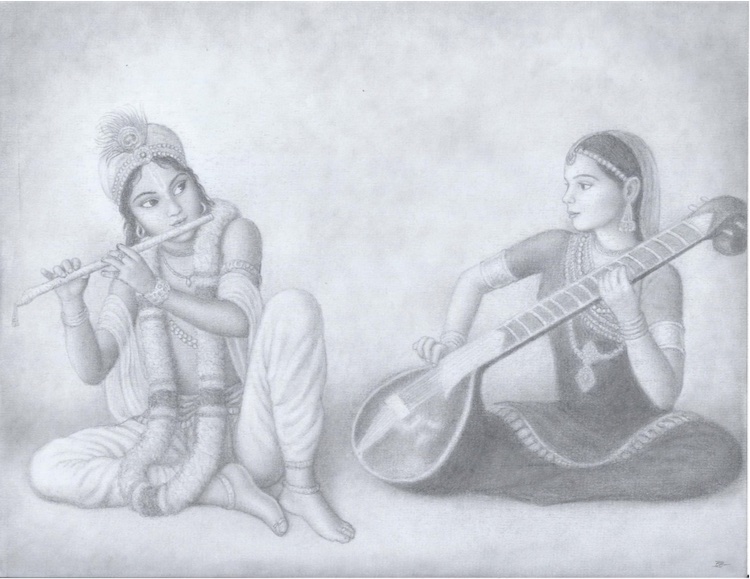 In the most recent Sept/Oct newsletter, inmate David B., who works in the prison kitchen,  recounts how the prasadam he cooks transforms even the most hardened criminals.

“He is a big, physically imposing drug dealer and gang member with tattoos all over his body— even his face,” David wrote of one inmate. “Yet, he lit up like that little child he once was and ‘infected’ those around him with that energy as the laddhus I made quickly disappeared. He is another one who, when he sees me, does the Pranams hands and says “Hare Kṛṣṇa” to me. I smile and offer Pranams and say “Hare Kṛṣṇa” to him, another jivatma, and to Kṛṣṇa who resides as the Paramatma in all of us.”

Bhakti-lata is deeply passionate about transforming such people through ISKCON Prison Ministry – the service is her life. And she hopes that the new website will help to convey its importance to other devotees in ISKCON too.

“When I was a young child, if I found a cricket, a pigeon, or a caterpillar that was injured, I would bring it home and try to nurse it back to health,” she says. “I was always trying to help those that needed it the most. And as a devotee, we know that Lord Chaitanya is Patita Pavana, and His movement is for the most fallen, the most desparate. And those in prison really have a sense of desperation. Their food is disgusting, the association is awful, they’re oppressed both by the other inmates and often by the staff. So a ray of light in that environment is so vital to them.”

She explains, “Many inmates have told me, ‘Apart from the devotees, no one else writes me or cares about me.’ And they realize, ‘Wow, I can be free, even in a prison!’ They might not be able to change where they live, who they’re bunking with, or the food they eat. But their spiritual life is within their power to change, and it transforms their life completely. It gives them, peace, hope, and happiness, even if they have a life sentence. And for those that are released, it gives them a better footing to start a new life.”