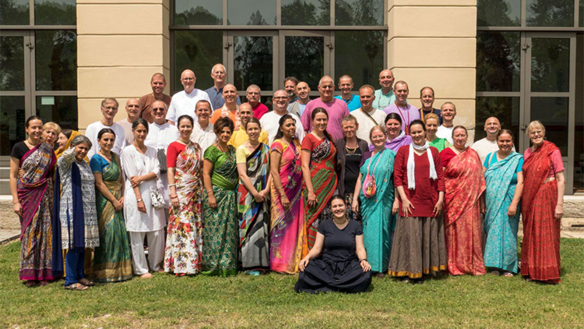 ISKCON Communications, the agency charged with interfacing with the public on behalf of the International Society for Krishna Consciousness, is undergoing a major makeover, including a new website at https://iskconcommunications.org/ with resources for the media and temple leaders, and a website redesign and rejuvenated social media presence for ISKCON News.The ISKCON Communications team in Italy in 2018

ISKCON Communications’ mission is to “create favorable environments for advancing the Hare Krishna Movement, by building confidence and faith in the integrity of the movement’s members and its mission.”

To achieve this, the Ministry and its global team interfaces and networks with the media, governments, religious leaders, academics, non-government organizations, and other social and community leaders. The team’s goal is to build mutually beneficial relationships with these entities and to work together to benefit and uplift society, remembering that the first of ISKCON’s Seven Purposes includes to promote “real unity and peace in the world.”

It was ISKCON Founder-Acarya Srila Prabhupada himself who first demonstrated these priorities through his efforts to garner support from opinion-leaders and policy makers across the world. Prabhupada regularly met with politicians, professors, religious leaders, scholars, parents of devotees, and media representatives wherever he traveled. Prabhupada shared his thoughts in  a letter to Tejas Das in 1973, “Because we are in the material world sometimes we require that help…so try to make them [leaders of society] sympathizers.”

Following in his footsteps were his early disciple Mukunda Goswami, who began the ISKCON Communications Office in 1977, and current International Communications Minister Anuttama Das, who has been running the office since the mid 1990s.