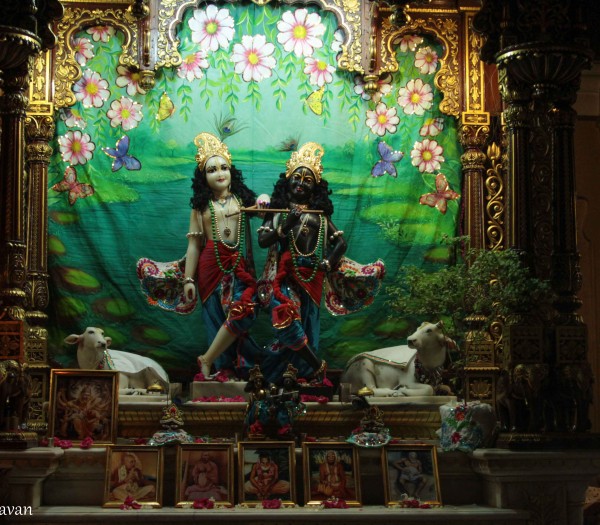 One of the features of the Krishna Balaram Mandir is that everyday Mangal Arati is packed with devotees, including in the sunken courtyard and all the way by the front entrance. Not only that, but there is usually a big crowd for the 4:10 am Arati for Srila Prabhupada in his samadhi. If you don’t go early, you’ll probably have to stand outside.

On some days during Kartik, you literally cannot even enter the temple room. Devotees are spilled outside, some watching Mangal Arati on the monitors through the glass walls of the vrindavan.tv studio next to the temple. There is something about the atmosphere in Vrindavan that makes it hard to sleep through the morning program.

So why go to Mangal Arati?

Is it really critical?

Of course, in hundreds of letters, particularly to those just getting initiated, Srila Prabhupda would write that along with Japa and the four regs it was mandatory for spiritual life. He instructed the temple presidents that they could be a little lenient with first initiation (Harinama), but second initiation (Brahman) was only for those who could rise early.

In the more than six hundred ISKCON temples around the world devotees rise during the Brahma Muhurta, that auspicious time one and a half hours before sunrise, to sing the Guruvastakam, or eight prayers to the spiritual master, composed by Srila Visvanath Chakravarti Thakur.

What is not so commonly known is that there is actually a ninth verse that we don’t sing. This verse is called the Srutiphal or spiritual fruit one receives from reciting a prayer. In that ninth verse Srila Chakravartipada writes that the benediction received by those who rise daily during the Brahma Muhurta and sing the eight prayers to the Spiritual Master will never take birth again in the world of the samsara.

In India, the culture has always been that people get up before sunrise. This is followed even by the common man out of respect for Lord Vishnu, the personality of the Sun, as the servant should always rise before the King.

In the Mahabharata it is described that Draupadi was of such an exalted nature that she would wake up before everyone else in the house, even before the servants, to begin her services. In the evening, after seeing that her five husbands and all others were satisfied, she would also be the last to take rest at night.

This is the real motivation for an aspiring devotee to rise for Mangal Artik. If kind Sri Krishna Himself is getting up at this time, and we stay in bed, it indicates we are not truly understanding ourselves to be a servant of the Lord.