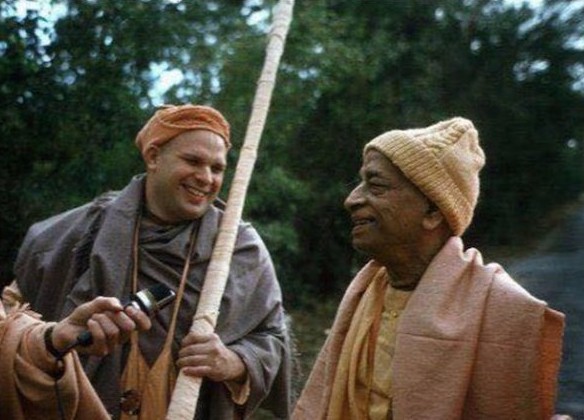 “My exposure to the young devotees and to Swami Bhaktivedanta as well as the chanting of Hare Krsna has brought me moments of inner peace and has enabled me to live a little more spiritually with my family and in my profession. My two older children also spent some beautiful moments with the Swamiji times we will always treasure.
“It is not necessary to shave your head and to become fully absorbed in the teachings to absorb some of the spiritual vibrations which flow from the devotions and activities of the Krsna consciousness movement. Chanting and feasting in the woods behind my house here in White Plains has brought joy and bliss to our neighbors from all walks of life.”
from a letter by Stephen J. Goldsmith, attorney-at-law, White Plains, New York.

KRSNA CONSCIOUSNESS is also known as bhakti-yoga, which means attaching or linking oneself to the Supreme Lord through divine love. Love is the highest, most exalted state of consciousness, and of all kinds of love the most satisfying is love of God, or Krsna. When love is reposed in Krsna, that love will automatically extend to all His creatures. Krsna consciousness, therefore, is total love.

The idea is to make Krsna consciousness, or bhakti-yoga, the spiritual center of one’s life. When the radio was first introduced, it became so popular that families all across America gathered around it in the evenings. Then came television, and that has now become central. But through Krsna consciousness, with its singing, dancing, feasting, and philosophy, spiritual life can become the spiritual center of one’s home.

When Srila Prabhupada first began spreading Krsna consciousness in America, he gave specific instructions on how one can become Krsna conscious at home.

First, set up an altar in your home at some convenient place. The altar is a place where you can perform meditation, offer devotion to the Lord, and receive the Lord’s love. The altar can be a small table (this is what Srila Prabhupada first used). Or you may even want to set aside an entire room as a “meditation room” for added sanctity and serenity.

Also on the altar should be a photo of His Divine Grace A.C. Bhaktivedanta Swami Prabhupada, the founder and spiritual preceptor of the International Society for Krishna Consciousness, who introduced Krsna consciousness to the West. Between 1965, when he came to America from India, and 1977, when he passed away from this world, Srila Prabhupada conveyed the fullness of spiritual life through his lectures, letters, books, recordings, and the example of his own life. (At this writing, Srila Prabhupada’s extraordinary life is now being detailed in an authorized biography by his Divine Grace Satsvarupa dasa Goswami. See page 7.)

The best time to meditate before the altar is in the morning, if possible just before sunrise, and again in the evening, around sunset. These are the best times for spiritual advancement. In the early morning the mind is especially fresh and clear, and by beginning and ending the day with meditation you sandwich the activities of your day between spiritual practices.

In front of the altar, you can perform the purest, most joyful form of meditation, called kirtana. Kirtana means meditating on God by glorifying and praising Him with a mantra, a transcendental sound that cleanses and liberates the mind. The recommended mantra for the present age (the Iron Age of Quarrel) is the maha, or great,mantra: Hare Krsna, Hare Krsna, Krsna Krsna, Hare Hare/Hare Rama, Hare Rama, Rama Rama, Hare Hare. Chanting the Hare Krsna mantra will reveal to you the essence of all Vedic literatures and instructions. It is a transcendental vibration, nondifferent from Krsna Himself. Krsna is absolute, so He is the same as His name. To chant Hare Krsna, therefore, is to experience Krsna directly.

A yogi of the highest order will never meditate on anything impersonal or void. Only yogis who are stuck on the bodily platform do this. And even if such second-class transcendentalists achieve liberation from the material world, their achievement is temporary, because they fall again to materialistic life. But by chanting Hare Krsna faithfully and attentively, you will come in personal touch with Krsna and get that true transcendental experience you are looking for. While chanting, it is best to fix your mind on the chant by hearing the sound of each word, each syllable of the mantra. This will help pacify your mind and bring it under your constant control, and with a controlled mind you will be able to experience great spiritual pleasure.

There are two ways of chanting. First, you can chant quietly to yourself with the help of meditation beads. This quiet chanting is called japa. Using the beads helps engage your sense of touch in the meditation, as well as your speech and hearing. The second way to chant is aloud. With your family or a group of friends you can sing responsively and play hand cymbals, drums, or other musical instruments, or if you prefer you can just play a record or tape of the kirtana and sing along. It’s really a joyous thing, especially with a group, so why not invite your friends? The more the merrier. And if you feel like getting up and dancing during the singing, well, just go ahead. Enjoy the chanting of Hare Krsna.

After the chanting, the mind and body are clear, and you are ready to give full attention to spiritual subject matters. Now you can read from the Bhagavad-gita As It Is. The Bhagavad-gita was spoken by Lord Krsna, the Supreme Personality of Godhead, five thousand years ago in India. Within its pages you will find such diverse spiritual topics as the soul and proof of its existence, the difference between the body and the soul, the nature of God, the choice between work and renunciation, the nature of the world, how to live a godly life, reincarnation (transmigration of the soul), what yoga is, what karma is, how to prepare for death, what happens after death all this and more, compressed within seven hundred verses. Srila Prabhupada’s purports, his explanations of the verses, elucidate the meaning and guarantee clear understanding of exactly what Lord Krsna spoke. You can read the book little by little, so as to digest it carefully. Reading out loud, even if alone, sharpens the mind’s attention.

After the chanting and philosophy, you will probably have quite an appetite. So refreshments follow. On the altar you can offer food to Lord Krsna with devotion, and He is so kind that He partakes of the offering, and what is left you can take as

His holy remnants, called prasada. Youcan offer Krsna simple fruits, whatever happens to be in season; or if you are more ambitious you can prepare and offer vegetarian dishes using milk, sugar, butter, vegetables, grains, and spices. The Lord will not accept nonvegetarian offerings, but a Hare Krsna Cookbook isavailable that gives recipes of wonderfully tasty dishes you can prepare for Krsna’s satisfaction. In addition to offering food, you can also offer some flowers and incense on the altar, and this will make for a very nice atmosphere.

After placing the food on the altar, you can recite this prayer: “O Lord, this material body is a lump of ignorance, and the senses are a network of paths to death. Somehow I have fallen into this ocean of material sense enjoyment, and of all the senses the tongue is the most voracious and uncontrollable. It is very difficult to conquer the tongue in this world, but You, dear Krsna, are very kind to us, and You have given us this nice prasada, spiritual food, just to conquer the tongue. So we now take that prasadato our full satisfaction and glorify Your Lordships Sri Sri Radha and Krsna and in love call for the help of Lord Caitanya and His associate Lord Nityananda “

Now it’s time to partake of the prasada undoubtedly one of the most enjoyable aspects of Krsna consciousness.

Now that you have had spiritual food that has first been offered to Krsna, you’re ready for your daily work. Whatever it is, you will perform it more efficiently and with definite satisfaction. Naturally, the benefits of bhakti-yogaperformed at home will accompany you throughout the day, at your work. Because your consciousness has been cleared, you will be alert about what to do and what not to do. Also, you can directly spiritualize your work by using a portion of its fruits your wages for spiritual life, either by purchasing Krsna conscious books and paraphernalia or by donating a portion to spread Krsna consciousness. I, for instance, worked as a teacher for two years while learning Krsna consciousness, and I donated my wages. Often people can dovetail their work with the service of Krsna and do something that assists the Krsna consciousness movement. Take Mr. Goldsmith, for example, who wrote the letter quoted at the beginning of this article. Back in 1966 he used his ability as an attorney to draw up ISKCON’s constitution and formally register ISKCON as a religious organization. Surely that alone has endeared him to Lord Krsna and Srila Prabhupada eternally, making his life as a human being a success. So you see, it’s very easy to begin Krsna consciousness.