For the first time in ISKCON history, and to honor the 125th Appearance Anniversary Year of Srila Prabhupada, the TOVP management is organizing an online Sampradaya Samelan (summit) that includes the head acharyas of the four Vaishnava sampradayas.

On October 14, during the first day of the Welcome Ceremony of Srila Prabhupada’s new murti to the TOVP, a ZOOM call will ensue for this purpose and be broadcast by Mayapur TV as part of the two-day welcome event. All four acharyas as well as other sampradaya representatives will participate in a panel discussion on the state of Vaishnavism in the modern world, organized and monitored by His Grace Gauranga das. 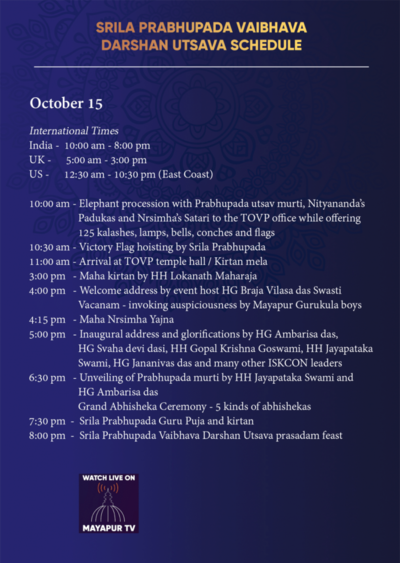 There are four sects of worshipful devotees of the Lord, and the chief amongst them are the Brahma-sampradaya, Rudra-sampradaya and Shri-samprad

aya, descending directly from Lord Brahma, Lord Shiva and the goddess of fortune, Lakshmi, respectively. Besides the above-mentioned three sampradayas, there is the Kumara-sampradaya, descending from Sanat-kumara. All of the four original sampradayas are still scrupulously engaged in the transcendental service of the Lord up to date, and they all declare that Lord Kṛṣṇa, Mukunda, is the Supreme Personality of Godhead, and no other personality is equal to Him or greater than Him.