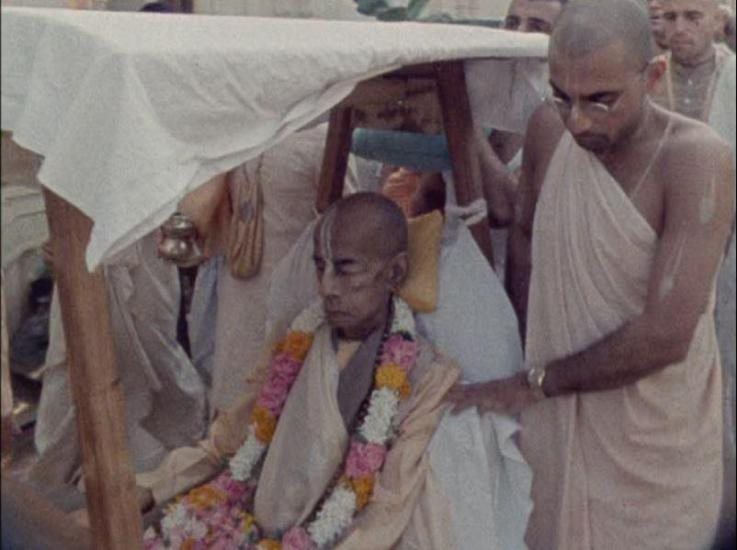 Sarvabhavana Prabhu, who joined ISKCON recalls, “I and a friend of mine, who later became His Holiness Bhakti Caru Swami, went from Calcutta to Hamburg in 1970. There we met the devotees for the first time and accepted an invitation for the Sunday feast. [Srila Prabhupada and Disciples in Germany by Vedavyasa Dasa]

One day an unusual, young Bengali man came to Mayapur. Named Kisore, he was a Vaisnava from birth and obviously intelligent. He spoke impeccable English and was also fluent in German because he was a student in a German university. With simply a little coaxing, he surrendered to Srila Prabhupada and quickly got initiated, receiving the name Ksira-cora-gopinatha dasa. On several occasions he kindly translated conversations between Pisima and me. Several months later, Srila Prabhupada awarded this cultured young man sannyasa, changing his name to Bhakti Caru Swami. [SP is Coming, April 1976-March 1977 by Mahamaya DD]

Introduction to ‘Renunciation through Wisdom’ by His Holiness Bhakti Caru Swami

His Holiness Bhakti Caru Swami: What many people may not know, however, is that during the years before he came to the West, Srila Prabhupada wrote extensively on Krishna Consciousness in his native language, Bengali. In 1976, soon after I joined the Hare Krishna movement, I discovered some of Srila Prabhupada’s early Bengali writings. They were serialized essays that had appeared in a monthly magazine he edited called Gaudiya Patrika.

One of these lengthy essays, entitled “Bhagavaner katha” (“Knowledge of the Supreme”) ran in the Gaudiya Patrika in 1948 and 1949, soon after India won its independence. I decided that it would make a wonderful booklet for Srila Prabhupada ‘s growing number of followers in his native Bengal. When I presented Srila Prabhupada that newly printed booklet in early 1977 in Calcutta, he was extremely pleased. He looked at me with his face shining brilliantly, and with a broad smile he said, “Thank you, thank you very much. Please keep printing my books.”

I was so encouraged that I soon collected as many of Srila Prabhupada’s Bengali writings from the Gaudiya Patrika as I could and printed them as booklets under the titles “Bhakti Katha” (The Science of Devotion), “Jnana Katha” (Topics of Spiritual Science), “Muni-ganera Mati-bhrama” (The Deluded Thinkers) and “Buddhi-yoga” (The Highest Use of Intelligence). Finally, I compiled all the booklets into a hardbound book called Vairagya Vidya, which has now been translated in English and titled Renunciation through Wisdom.

Srila Prabhupada in Rishikesh and Vrindavana in 1977

His Holiness Bhakti Caru Swami: So everything was very wonderful in Rishikesh, and Srila Prabhupada was very restful and we were having a wonderful time. Then all of a sudden one day there was this huge storm, and it looked so ominous. It was not only heavy rain but there was a storm, and the storm made some electric poles topple over in some place and electric supply got disrupted. And it became very cold also – cold, rainy and wind. And it was very eerie, ominous. In those days, I used to attend Srila Prabhupada from twelve to two. And it was around one o’clock Srila Prabhupada just called me and he told me that “The time has come for me to die, and I want to die in Vrindavan. So make arrangements to take me to Vrindavan.” And it was such a shock as if it was a bolt from the blue. So that night only we packed everything up, and we decided to leave the next morning. [May 1977: Rishikesh, India, Arrival, Cooking]

His Holiness Bhakti Caru Swami: When Prabhupada arrived, the devotees were so happy. And when Prabhupada went to his room, all the devotees came in and there Prabhupada broke the news why he came. And I remember in a flash of a moment their ecstasy was transformed into agony, they all started to cry. And understanding their feelings, Srila Prabhupada then started to console the devotees by explaining about the futility of our material existence. He quoted the verse dehino‘smin yatha dehe, that it is just a matter of transmigrating from one body to another. Srila Prabhupada called me when all the devotees left and he told me, “From now on, don’t cook for me. Don’t force me to eat anything.” He said, “What’s the use of eating when there is no appetite?” And I felt that Srila Prabhupada is actually stopping to eat and drink like Pariksit Maharaj preparing to leave his body. [May – August 1977: Vrndavana Arrival]

Sannyasa Initiation of His Holiness Bhakti Caru Swami – May 29, 1977, Vrndavana

Srila Prabhupada: The meaning, that “I am taking this sannyasa for the purpose of crossing over the ocean of nescience.” Etam sa asthaya paratma-nistham. Paratma-nistha, Bhagavan, Paramatma. Simply to serve Krsna. So here are three dandas. One danda, person. There are four dandas. He is person, “I am.” And the other three danda, my mind — kaya manah vakya — my body and my words. “So I dedicate my mind, my body and my activities, paratma-nistha, only for the service of the Supreme. So being situated in that position, following…” Purvatamair maharsibhih. It is not that I have introduced something new. All big, big acaryas, they took sannyasa for this preaching work — Ramanuja, Madhvacarya, Sankaracarya even. And that is purvatamair maharsibhih. Mahajano yena gatah sa panthah [Cc. Madhya 17.186]. We have to follow maharsibhih. So “All acaryas of India, they have taken sannyasa, so I am also taking sannyasa. The business is paratma-nistha.” So what will be the benefit? Aham tarisyami duranta-param: “This ocean of nescience is duranta-param. It is very, very difficult to cross over. But I’ll cross over.” How? Tamah. This is darkness, tamah. Mukundanghri-nisevayaiva: “Simply by serving the lotus feet of Mukunda.” Mukunda means “one who can give liberation, mukti.” Mukunda. So chant again this.

Prabhupada: So now… Whose danda it is?

Prabhupada: Take this danda… Tomara nama habe… [Bengali] Bhakti-caru Swami… So what is your name?

Srila Prabhupada: You have consulted with Narayana Maharaja?

“It doesn’t matter whether what she cooks does good to me or bad,” said Srila Prabhupada. “She is a Vaisnavi. It will be good for me.” He then began speaking in an extremely humble way. “Probably I became a little puffed up because of my opulence and success,” he said. “Now God has shattered that pride. If you don’t have your body, what is there to be puffed up about?”

“That may be, but in this world, unknowingly you commit offenses.”

When Pisima heard this, she exclaimed, “No, no, he never committed any offense.”

“I am a little temperamental,” said Srila Prabhupada. “I used to use words like rascal and so on. I never compromised. They used to call it “A club in one hand and a Srimad Bhagavatam in the other.’ That is how I preach. Anyway, make arrangements for my sister.” [SPL 55: Nov, 1977, The Final Lesson]

In Calcutta, the East Indian division of the Bhaktivedanta Book Trust (BBT), under the direction of Srila Jayapataka Swami, published a unique Bengali edition. It comprises Srila Prabhupada’s Gita-gana, a poetic Bengali rendition of the Bhagavad-gita originally published in 1962, along with his unabridged commentary, translated from English into Bengali by His Holiness Bhakti-caru Swami. [BTG 1982]

In 1996, members of ISKCON celebrated the centennial of the movement’s founder, Srila Prabhupada. The celebrations inspired Hare Krsna devotees everywhere to do whatever they could to spread knowledge of Srila Prabhupada and his teachings. Like many others, His Holiness Bhakti Charu Swami felt a strong desire to offer something special to his SM on the occasion. “I remember looking at a book on the greatest personalities of this century,” says BCS. “To my great disappointment, I found that Srila Prabhupada’s name was not mentioned. Although he is the greatest person of this age, very few people give him the recognition he deserves. His ISKCON is widely known, but hardly anyone knows the person behind it. I felt I should do something to make Srila Prabhupada known worldwide. “Since audio-visual media are the most prominent today, I wanted to make a film about Srila Prabhupada’s life and achievements. Then Hema Malini, a movie star from Bombay, gave me the idea of a TV serial. She felt it would be impossible to show Srila Prabhupada’s life and achievements in a two-hour movie; we would be able to show much more in a serial.”

His Holiness Bhakti Charu Swami wanted to do more than just glorify Srila Prabhupada. He wanted to present Srila Prabhupada ‘s life and achievements through a screenplay that would bring out his struggles, triumphs, and disappointments, and tell his story in detail.

The serial, based on the biography Srila Prabhupada-lilamrta, by His Holiness Satsvarupa Dasa Goswami, is entitled Abhay Charan (Srila Prabhupada’s birth name). It was originally shot and edited for Indian television in episodes of twenty-five minutes. The first episode aired on September 7, 1996, the day after Srila Prabhupada’s Centennial Appearance Day. The shows were then broadcast every Saturday, reaching millions of people all over India.

“Sometimes I wonder how we managed to build this temple in ten months,” His Holiness Bhakti Charu Swami told Avantika, the temple magazine. “The only thought that comes to my mind is that it happened by Krsna’s mercy. This actually proves that if we sincerely try to serve Krsna, Krsna helps, and as a result of that all kinds of wonderful things happen.” -Enjoy the fully functional twenty-eight-room guesthouse, Govinda’s Restaurant, on the ground floor, the top floor an auditorium awaits fresh ideas for Krsna conscious theater, as well as classical music, traditional dance, and devotional conferences. In an adjoining building resides the brahmacari ashram, with its ground-floor prasadam hall and central office complex. Like the guesthouse, it is covered in white marble.

On 3rd December, 2018, in his letter, His Holiness Bhakti Charu Swami, deeply encouraging me, wrote, “None of us are perfect, but we must strive for perfection – that is our ultimate goal. Therefore, when you face such a situation try to take it as Krsna’s mercy to improve yourself. I can well imagine how you must be feeling now, and I do sympathize with you. You are a very capable devotee with many wonderful qualities, and I am confident that in due course of time you will render many valuable services to Srila Prabhupada. Please do not allow this kind of disappointments to dampen your spirit, but let them become the stepping stones on the path of your spiritual progress. If there is anything I can do to help, please do not hesitate to let me know.”

On 3rd April, 2020 I wrote to His Holiness Bhakti Charu Swami, “Today, I was thinking of you – most auspicious for me. May Sri Sri Radha Madan-Mohan always protect you”.

On 10th April, 2020, in his last letter to me, His Holiness Bhakti Caru Swami wrote, “I am confident that wherever you are you must be preaching very nicely and benefiting innumerable people with the transcendental wisdom of Srila Prabhupada’s books”.

All glories to His Holiness Bhakti Charu Swami.

All glories to all the Devotees.